Lots of alerts, but no tsunami

A view of Ketchikan from the top of the Edmonds Street stairs. (KRBD file photo)

A magnitude 7.9 earthquake hit the Gulf of Alaska near Kodiak early Tuesday morning. That prompted tsunami alerts for the state’s entire coast, including southern Southeast Alaska.

Posts on social media show that a little shake was felt by some people in Ketchikan, and everyone who’s signed up for text alerts quickly received warning messages.

City of Ketchikan Fire Chief Abner Hoage is the community’s emergency management coordinator. He said it was clear early on that Ketchikan would not be affected.

So, why did Ketchikan residents receive text alerts? Hoage said those alerts are sent to a large geographical area that includes Ketchikan and other coastal communities, like Hyder and Craig, that are more vulnerable. Ketchikan is in protected waters and less likely to experience a tsunami.

“That’s part of the reason we get weather alerts – a winter weather advisory for example – for snow in Hyder,” he said. “It really has no impact on Ketchikan, but they can’t activate that alert without hitting our entire region. Same thing for a tsunami warning. They can’t just carve out the outer coast area.”

There were no tsunamis in southern Southeast Alaska. Even close to the epicenter, just a slight wave was observed. All warnings, watches and advisories were canceled by a little after 3 a.m.

Hoage said if Ketchikan residents did have to evacuate to higher ground, tsunami warning sirens would have been activated. He said residents also can sign up for text alerts through Nixle.

“I did send out two Nixle alerts last night. I would encourage people to sign up for Nixle alerts, because that’s how we can activate on a more local level, and get information out to people if they do need to evacuate,” he said. 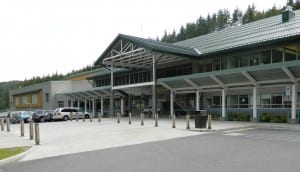 The borough-run Gateway Recreation Center is one of the community’s designated evacuation centers. (KRBD file photo)

People can sign up for Nixle by texting their zip code to 888-777. Anyone in Ketchikan signed up for that service would have received multiple text alerts from Alaska State Troopers and the City of Ketchikan. The Troopers alerts were more general ones covering the wider geographical area. Alerts from the city specified that no evacuation was needed for Ketchikan.

Hoage said the community also has a reverse-911 alert service for anyone with a landline.

Even though the area was not affected by a tsunami this time, Hoage said it’s a good idea to be prepared. Ketchikan residents can go to the City of Ketchikan’s website, and find the preparedness page in the fire department’s section of the site.

“We have inundation maps that you can get links to by going to the tsunami information on that page,” he said. “Be aware of what the potential inundation zone is, based on those maps, know if your residence of business is in that zone so that when that alert happens, you know either: ‘I’m in the zone and need to think about doing something,’ or, ‘I’m already in a safe location.’”

Ketchikan has designated evacuation centers at various school buildings, and the Gateway Recreation Center. There are tsunami evacuation route signs posted on roads to help people find those centers.