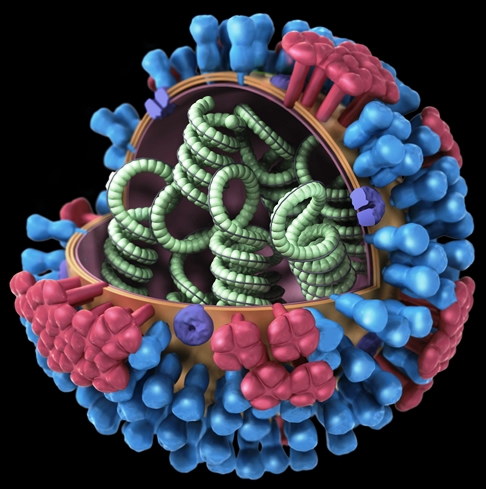 The influenza virus is seen in this graphic from the Centers for Disease Control.

In a recent announcement, the local hospital reports that several people have been admitted for severe flu symptoms, and there has been an increase in general flu throughout the community.

Unlike a cold, the flu tends to develop suddenly. Symptoms include fever, cough, sore throat, runny or stuffy nose, muscle or body aches, headache, fatigue, and sometimes diarrhea or vomiting.

Most people with the flu have mild illness and do not need to see a doctor. According to the hospital, those people should stay home and rest, drink plenty of water and other clear liquids to prevent dehydration, and avoid contact with other people.

In some cases, the flu can develop into more serious illnesses. Those at higher risk from the flu include young children, people 65 and older, pregnant women, and people with certain medical conditions.

Severe symptoms include difficulty breathing, pain or pressure in the chest or abdomen, dizziness, confusion, and severe vomiting. For anyone experiencing those symptoms, PeaceHealth recommends going to the emergency room.

For children, emergency warning signs also include a bluish skin color, not drinking enough fluids, and fever with a rash. And for infants, the hospital says medical help is needed right away if the child is unable to eat, has trouble breathing, has no tears when crying, or has significantly fewer wet diapers than normal.

As always, one way to help avoid contracting and spreading a virus is to wash your hands frequently.