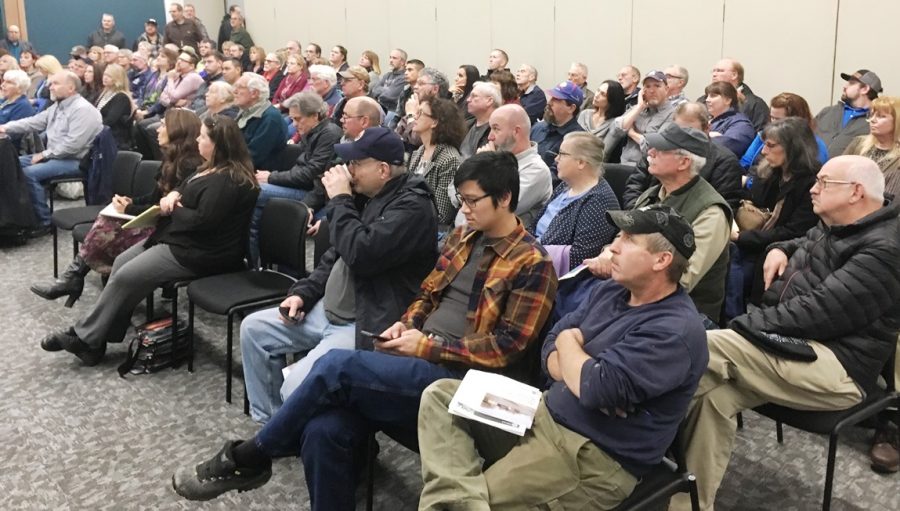 About 175 Ketchikan residents attended a special event at the Ted Ferry Civic Center on Thursday. They weren’t there for a play or concert, though. They were there to find out whether their homes or businesses will be in new flood zones mapped by the Federal Emergency Management Agency, and if so how much will flood insurance cost.

The public information event officially started at 5 p.m., but even before 5, there was a long line of Ketchikan residents waiting to get a flood map specific to their property.

Ted Perkins is the Region X representative for FEMA. He said it’s good that so many people showed up.

“We have a full staff up here to try and answer people’s questions about what this all means, how can someone get the best insurance rate, how do you deal with the floodplain regulations if you’re dealing with being in the floodplains and those types of things,” he said.

Perkins said there’s always a backup at the table for obtaining individualized maps. Three map-printing stations were set up. Risk analyst Cythnia McCoy was running one of them, finishing up with one couple.

Next was Candy Peterson, who was pretty sure her home was not in a flood zone, but wanted to make sure.

“So, let’s turn on the current flood zone from 1990,” she said. “We’re not showing any risk in that area, or at least not that was mapped. Now let’s look at the preliminary data that’s expected to go effective in about a year. We’re not showing any floodplain on your property.”

That was good news for Peterson. 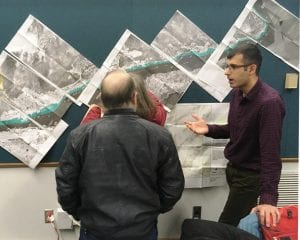 A FEMA official talks to Ketchikan residents about new flood zone mapping that will include more properties than previously in areas considered at risk for flooding. (KRBD photo by Leila Kheiry)

The current flood zone maps were drawn in the 1990s, and include just the City of Ketchikan. Updated maps due to go into effect next year will cover the Ketchikan Gateway Borough’s entire road system, and will expand the number of affected properties from 48 to about 1,100.

Pete Halvorsen owns one of those 48 city properties currently in a flood zone map. Because he has some federally backed loans on his Alaska Outboard building, he is required to have flood insurance. Halvorsen said FEMA flood insurance premiums have gone up in recent years, and he’s now paying about $5,500 a year.

Halvorsen said he attended the meeting to warn people about what he calls a scam.

“I obviously have very deep feelings about this whole scenario. I just want people to be aware this is not cheap. It’s going to deeply impact everybody’s livelihoods,” he said. “To me this is nothing more than extortion by the federal government which is going to result in the fleecing of this community out of potentially hundreds of thousands of dollars each year. It’s just wrong and for no reason other than they can do it.”

The Ketchikan Gateway Borough joined FEMA’s National Flood Insurance Program in the 1970s. It could opt out, but property owners in the mapped flood zones who hold mortgages still would be required by their lenders to have flood insurance.

But Sitka Republican Sen. Bert Stedman, who has been critical of FEMA’s flood insurance program, said his office is looking into what options might be available. In a separate interview, he suggested the new mapping is a way for FEMA to collect money for hurricane relief elsewhere.

“I don’t see why the people of Ketchikan should subsidize Houston, Texas, New Orleans or Puerto Rico,” he said.

Stedman added that there is low risk of flooding in Southeast Alaska, but FEMA’s flood insurance premiums are based on data for a larger zone. He said that means premium costs are too high for this region. 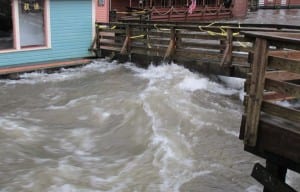 In 2015, Ketchikan Creek flooded after a combination of significant rain, an extra high tide and wind. That event led to the three reported FEMA flood insurance claims since the 1990s. (KRBD file photo by Leila Kheiry)

Stedman believes private insurance could be a cheaper option.

“We’re working on those details. In fact, I’ve got to meet with some insurance guys again,” he said. “But I know one merchant in Sitka that has a big store on the beach, and they included his flood insurance in with his other insurance at no cost. Because the chances of flood is near zero. He’s right on the ocean, and Sitka is more exposed than Ketchikan.”

Since 1990, three flood insurance claims from Ketchikan have been paid out by the FEMA program, totaling about $100,000. In that same time frame, about $2 million in premiums have been paid into the program.

During the FEMA public meeting, Perkins gave a presentation about the history of the program, methods used to map the new zones, and the reasoning behind adding so many more properties. He said FEMA looks at the 1-percent risk – what’s often called a 100-year-flood – to determine who should be included.

Jim Dahl owns a home on Ketchikan’s waterfront which is in a flood zone, according to the new maps. He said he appreciates that FEMA wants people to be safe, and protect their investment. But:

“I’ve lived in my property for about 35 years and not seen anything close to flooding,” he said.

Dahl said he does not have a mortgage now, so he won’t be required to carry flood insurance. But it will affect the resale value of his home.

Anyone who believes they should not be included in a flood zone can appeal the decision. The appeal period starts soon and will last about three months.

You can find FEMA links and other information about flood zones through the Ketchikan Gateway Borough’s planning department website: http://www.borough.ketchikan.ak.us/218/Flood-Management