Port development could take a bite out of public parking 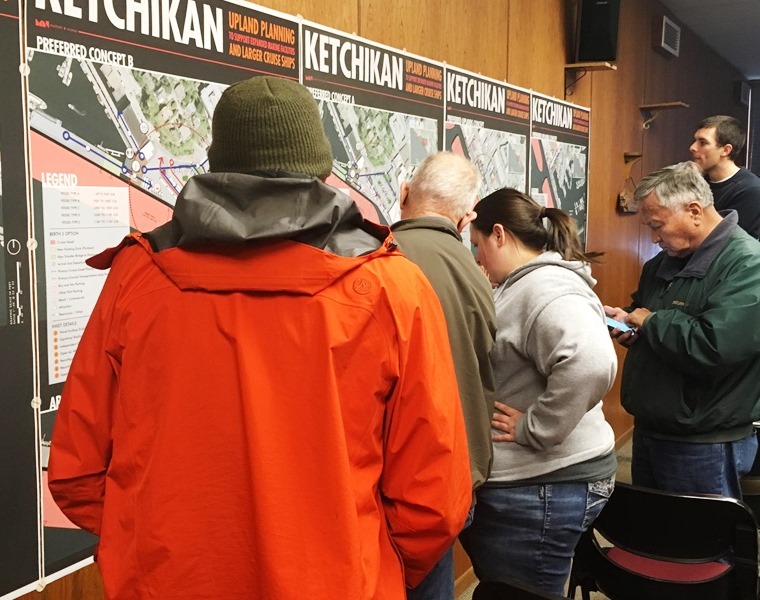 Part of a proposed uplands development plan for the Port of Ketchikan would remove 35-50 public parking spaces downtown.

That’s going to be a tough sell in Ketchikan, where parking already is challenging. But representatives of the firm working with the City of Ketchikan say the port needs that space for buses, vans and people.

Bigger cruise ships are coming to Ketchikan, with the first arriving this summer and more expected in the near future. That means more tourists, which means more vehicle and pedestrian traffic.

Ketchikan’s downtown already is crowded with people and vehicles during the summer. So, city officials are working on ways to accommodate all the additional people, in hopes of having a completed project by 2020.

Moffatt & Nichol is the consulting firm working with the city on port development. Scott Lagueux led a public-input presentation on those plans. He said they incorporated ideas from an earlier public meeting into the current designs. Those included preserving views, allowing more buses and providing tourist collection points.

“There was a lot of talk, and one area that still remains the hardest one to design for – and the one that we’re going to have to make a couple of tough choices about – is Berth 3,” he said.

That’s the more central berth, and along with tourists from the ship actually docked there, it’s where many of the cruise passengers from the ship at Berth 4 end up after strolling along Ketchikan’s waterfront promenade. 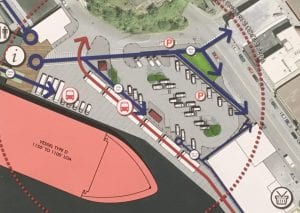 In the current proposal, the parking lot at Berth 3 next to Tongass Trading Co. would shrink. (KRBD photo by Leila Kheiry)

And that’s where the plans call for shrinking the number of parking spaces in the lot next to Tongass Trading Co. Doing that will make room for more tour buses and improve the pedestrian space. Lagueux said the plan also calls for restriping the parking lot to create diagonal spaces rather than the current 90-degree spaces. And diagonal parking takes more room.

That prompted some serious murmuring in the audience.  Lagueux  said he understands people aren’t going to like this proposal; and it’s possible to modify it a bit.

“We could potentially look at 90-degree on some of these and take out some of the landscape,” he said. “I think we could get into the mid-60s, maybe 70.”

Ketchikan’s Port and Harbors Director Steve Corporon also attended the meeting. He said the current lot often is not full, even in summer. With 90-degree parking spaces, he said, many drivers park poorly and make a space next to them unusable.

An audience member, though, said no. It’s full all the time.

“It’s the number-one parking spot in the city during the summer,” she said. “It is never empty. Friday afternoons it’s empty after 3:00, but the rest of the time it’s packed.”

Another audience member suggested building a two-story parking garage on Main Street up the hill to make up for the lost spaces. But, Corporon said the cruise lines would have to sign off on that plan. 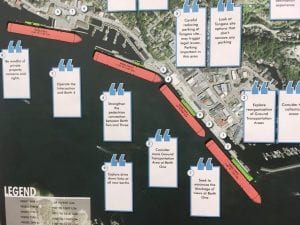 A graphic shows the Port of Ketchikan with four cruise ships, and notes from a previous meeting on ways to improve the uplands. (KRBD photo by Leila Kheiry)

“The cruise industry is really focused right now on making sure that port fees and CPV funds, which is just a state version of the port fees, are spent on the port in support of the ships and the passengers,” he said. “If you do it a block away – when do they start having a problem with that?”

Development of the port will be paid for through the city’s cruise passenger head tax, along with the city’s share of state head taxes. The cruise industry has sued the City and Borough of Juneau over its use of port fees.

Ketchikan might not be able to reduce the number of parking spaces in that lot, though. It was built through a Local Improvement District process. Downtown businesses paid into a fund to create that parking lot for potential customers. Corporon said the city’s attorney is looking into it.

Joe Williams said it’s time for Ketchikan to accept that it’s now a tourism town, like it or not.

“When you have 20,000 people in this community who don’t … live here, and you want it to be a good experience, we as the community of Ketchikan have to come to this realization that for me to park in downtown Ketchikan is over between the hours of 7 in the morning and 4 in the afternoon,” he said.

Williams has a walking tour business. He said it’s challenging to keep his clients together and safe because of all the traffic. He said he went to visit a city in Italy where no cars were allowed at all.

“And I want you to know, there was a lot of freedom to be able to walk in the streets without fear of being run over by a vehicle,” he said.

Ketchikan probably isn’t quite ready for that kind of a step, and the discussion quickly returned to the parking lot. Abby Bradberry said the city could hold off on a decision regarding Berth 3 until after this cruise season. Ketchikan will get its first big ship this year, she said, and that will give better information about how much change is needed.

“So definitely coming back to the drawing board on (Berth) 3, and seeing how the city handled it on the sidewalks or people filtering out and buses and parking,” she said. “See how that all transforms over this summer and see how that best suits both sides.”

Lagueux said that to be done by 2020, the designs need to be completed sooner rather than later. But, he said they could design a flexible plan for Berth 3 that could then be adjusted based on this summer’s experience.

Throughout the two-hour presentation, a Moffatt & Nichol representative wrote down audience suggestions on a large tablet, tearing the pages off as they filled up, and sticking them on the wall.

Lagueux told the group that their input, comments from a second meeting that day and directions from the Ketchikan City Council, would be incorporated into final recommendations. Those will go in front of the Council in mid-February.

Moffatt & Nichol also is working on plans to reconfigure the docks themselves so that mega cruise ships can tie up at the port. That’s a related, but separate project involving floating docks attached to the existing fixed docks. Public meetings on that are set for Feb. 14.

A copy of the power point presentation given during Wednesday’s meeting will be posted on the Port of Ketchikan’s website:  https://www.ktn-ak.us/port