State ferry Malaspina out of service for an extra month

The state ferry Malaspina will return to service about a month later than expected. That will affect nine Southeast port communities. 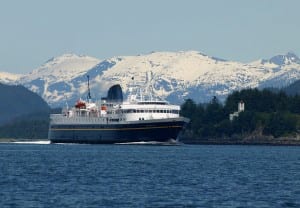 The Malaspina returns from Skagway. (Photo by Gillfoto/Flickr Creative Commons)

The 450-passenger ship was supposed to come out of a scheduled overhaul at Ketchikan’s Vigor Marine dry dock March 31. Instead, it will resume sailing April 28.

It usually travels a route between Prince Rupert, British Columbia and Haines, with seven other port calls along the way.

Alaska Marine Highway System spokeswoman Aurah Landau said no other ships are available to fill in.

“The Malaspina is the community boat for Southeast Alaska. It gets into smaller ports that the mainliners can’t get into. And impacts to the Malaspina, we understand, are significant for passengers and communities,” she said.

The ferries Columbia and LeConte will sail to and from those ports as scheduled. But service will be less frequent without the Malaspina.

The delay is due to a scheduling problem, not the need for additional repairs. A barge used as a floating cruise ship berth in Ketchikan will be in the Vigor Marine dry dock longer than expected. City Ports and Harbors Director Steve Corporon said it’s being overhauled.

“It’s in dry dock for routine maintenance to clean it, recoat it and put new zincs on it. And being Southeast Alaska, whenever you’re trying to essentially paint something this time of year, sometimes it can take a little longer to get it done than you would hope,” he said.

The berth and its supporting structures were struck by a cruise ship in 2016. Corporon said most of those repairs have been completed.

“The Malaspina in overhaul is going to get painted on its underside, the propeller hubs will be reconditioned and there will be some steel inserts on the car deck to replace wasted steel. And they’ll go through with normal annual inspections,” she said.

In addition to Prince Rupert and Haines, the Malaspina stops at Juneau, Ketchikan, Wrangell, Petersburg, Kake, Hoonah and Sitka.