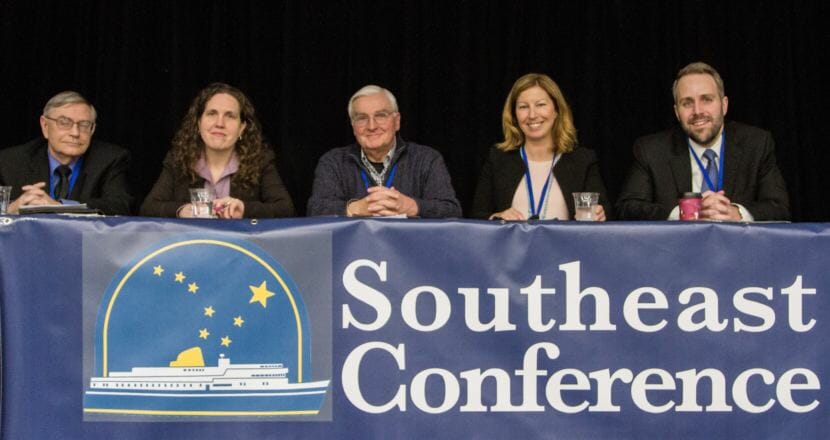 A panel of industry leaders took up timber, mining and other topics Tuesday, Feb. 13, 2018, during the Southeast Conference Mid Session Summit in Juneau. Josh Kindred of the Alaska Oil and Gas Association, right, spoke against the Stand for Salmon initiative. (Photo by Heather Holt)

Industry representatives are telling Southeast leaders they need to oppose the Stand for Salmon initiative and related legislation.

The measure, which is being challenged in the courts, would create stronger protections for Alaska’s salmon streams and rivers.

During the Southeast Conference Mid Session Summit in Juneau, power company and oil industry officials told about 100 regional officials Tuesday that the initiative would hinder development.

“What’s implied is that currently in Alaska, salmon or anadromous fish habitat isn’t protected,” said Josh Kindred, environmental counsel for the Alaska Oil and Gas Association. “And nothing could be further from the truth,”

He said the initiative and somewhat similar legislation would require unnecessary environmental reviews and its new regulations would be unenforceable.

“One of the fundamental problems here is that if this passes, you are basically giving the state five years of litigation,” Kindred said. “Given all the ambiguity in the proposal, all the gaps, all the contradictions, the state is going to be sued on this time and time again, because there is no clear path for the state to implement this without getting sued.”

That’s not the case, backers said. They said the Stand for Salmon initiative would update a 60-year-old law that does not give enough priority to Alaska’s fisheries.

The Alaska Power Association told the conference it also opposes the proposals.

“It contains a grandfather clause to where if you already have an existing project, as long as you don’t make any significant changes, you fall under your past permitting regime,” Rovito said. “But as soon as you make a significant change, you can fall under this new major permit.”

Sealaska Corporation also is concerned about the additional limits on development.

Initiative opponents have organized a well-funded campaign through the group Stand for Alaska.

The business leaders urged the Southeast Conference to adopt a resolution opposing the Stand for Salmon initiative.

It’s already considering such a resolution, which will likely be approved.