City needs to choose how to expand downtown dock Within the next few weeks, the Ketchikan City Council has a decision to make about how to expand the downtown cruise ship dock to accommodate mega ships due to arrive in the next couple of years.

Moffatt & Nichol, an engineering firm that specializes in marine infrastructure, is working on those plans with the city. Its engineers were in Ketchikan this week to gather public input on a couple of design options.

Choosing between Option 1 and Option 2 will be challenging. Ketchikan officials have to consider the benefits and costs of fitting one versus two mega ships at Berths 1 and 2.

During a public input meeting on those plans, Shaun McFarlane of Moffatt & Nichol described both proposals. He said Option 1 allows one really big ship at Berth 1, and only a normal-size ship at Berth 2.

“Basically, we’d be looking at two new floating docks, 400 feet at Berth 2 and 450 feet at Berth 1,” he said. “The existing mooring dolphin that’s in the mouth of Thomas Basin is removed, that becomes redundant, and we’ll be replacing that with two new mooring dolphins that will be further out.” 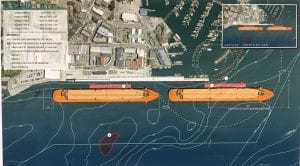 Option 2 would allow for mega cruise ships at both Berth 1 and 2 of Ketchikan’s downtown cruise ship dock. (KRBD photo by Leila Kheiry)

The new mooring dolphins are part of Option 2, as well. McFarlane said that while that will add obstacles for boats to go around, it should actually open up the entrance to Thomas Basin Boat Harbor more because they will be moved out further into the channel.

“If you liken the entrance to Thomas Basin as a driveway, you’re making your driveway both longer and wider,” he said.

Port and Harbors Director Steve Corporon estimated that the distance from the current dolphin to the proposed new ones is about 500 feet in Option 1.

With Option 2, that “driveway” into Thomas Basin would even longer. It allows for two mega ships at once, one at Berth 1 and a second at Berth 2.

McFarlane said the cost difference between the two plans is not that much – a few million dollars, which is negligible for such a major project. The choice is over what the community can handle.

“The thing that most clearly recommends towards accommodating the larger ships at Berth 1 is the upland work, and just the pain it would cause to try and accommodate 90 percent more passengers at Berth 2, with the area that we have to work with on the uplands,” he said.

The larger mega ships top 1,100 feet in length and can carry 5,000 passengers. Compare that to vessels Ketchikan has seen in recent years, which are less than 1,000 feet long and carry up to 2,500 passengers.

Another challenge that favors Option 1 is a rock pinnacle in the channel off Berth 2. It already is a navigational hazard for cruise ships. With bigger ships, it’s an even tighter squeeze.

The city is working toward removing that rocky pinnacle, but permitting to blast in the channel could delay its removal beyond the planned 2020 deadline to complete construction. Members of the public look at illustrations of how Ketchikan’s cruise docks might be expanded to accommodate larger ships. (KRBD photo by Leila Kheiry)

An audience member suggested that the city choose Option 2, because that would provide the most flexibility moving into the future. But John Scoblic of Trident Seafoods said less encroachment into the Thomas Basin area is better for his business.

Trident operates a seafood processing plant to the south of Thomas Basin, and its deliveries come in through that area.

“I guess our ask is the least amount of impact from current, today, to wherever we go,” he said. “In order for us to realize our full potential, we need to grow our fleet substantially, so the number of boats (we’re) berthing at Thomas Basin, and mooring in front of the plant, and at the end of Pennock Island and at Bar Harbor and everywhere else, we’re hoping for it to be substantially more.”

Scoblic suggested that the city expand Berth 4 instead.

Berth 4 is the furthest from Thomas Basin. The city leases that dock space from private property owner Survey Point Holdings, and it is going through an expansion, as well. Plans call for that berth to be able to take a mega ship by 2020.

McFarlane noted that the plans show 100 feet of clearance between ships while they are docked. But, the current practice is substantially less, he said, and squeezing that space would reduce the encroachment into Thomas Basin.

Scoblic said Trident isn’t opposed to port expansion; the business just wants to be considered in the planning process. The Moffatt & Nichol team gave a similar presentation to the Ketchikan City Council, as well. McFarlane told the council that a decision on Option 1 or 2 will be needed by early March to make the spring 2020 deadline.

He said they should have a good cost estimate by October. At that point, the city can move forward with bonding. Plans call for the expansion project to be paid for through the city’s cruise passenger head tax funds.

There wasn’t much comment from the council following the presentation. But Council Member Mark Flora suggested Ketchikan might be at capacity now for tourists.

“There’s never a discussion about the impact of this industry on the locals,” he said. “That’s who we work for. When we’re talking about a 90-percent increase in passengers at any given berth – we all know what it looks like downtown on a busy summer day. Just try to wrap your heads around that.”

Ketchikan’s ability to handle larger ships bringing more tourists will be tested on a smallish scale this coming summer. One of the shorter mega ships, the Norwegian Bliss, is on the schedule. That ship is a little more than 1,000 feet long, and carries about 4,000 passengers. It can be accommodated at the existing Berth 3 barge.