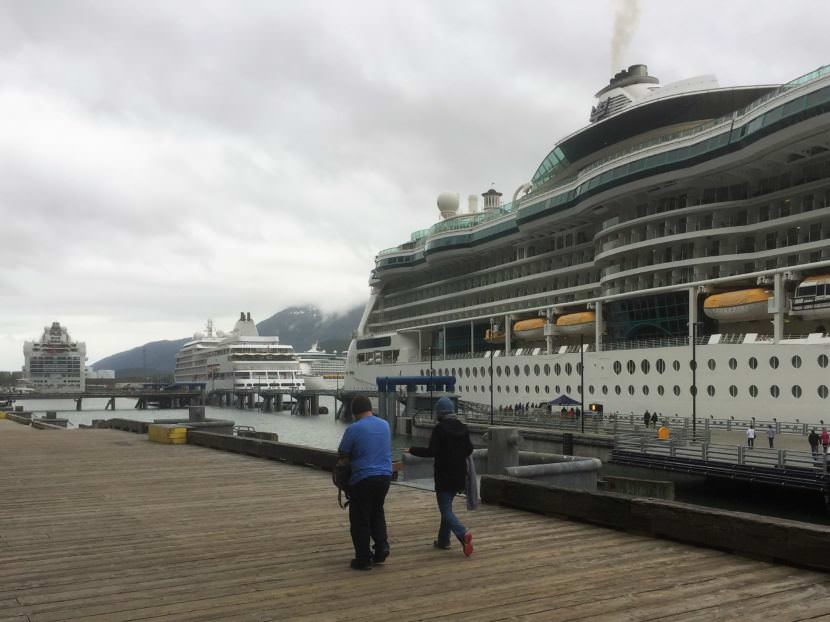 Passengers walk a downtown Juneau dock where three cruise ships are tied up June 11, 2017. A little more than 1 million people rode ships to Alaska that summer. By 2019, the number will be 19 percent higher. (Ed Schoenfeld/CoastAlaska News)

The number of cruise ship passengers visiting Alaska will jump almost 20 percent over the next two years.

Port cities need to plan for the infrastructure needed to support that many people.

One industry idea could change community control of the fees cruise ships pay.

Cruise lines are bringing more and more tourists to Alaska.

Passenger numbers topped a million for the first time in almost a decade last summer.

About 1.31 million passengers are expected to arrive in 2019, 19 percent more than last summer, according to projections Binkley released at the recent Southeast Conference Mid Session Summit.

Starting this summer, the larger ships will really be larger.

The Norwegian Bliss will carry up to 4,000 passengers, plus crew, starting this June.

The Ovation of the Seas will come in the following year, with as many as 5,000 passengers per sailing, double the capacity of some ships already traveling the region. Only Ketchikan, Juneau and Skagway can handle such vessels.

They’re the biggest Southeast ports and they get the largest share of passenger fees.

Binkley said those total about $45 million a year, statewide. He said pooling that would allow other cities to boost their industries, too.

“We could be building a brand new dock each and every year in new communities around Southeast Alaska if we worked together and said … what’s the best way to take these dollars that we have and utilize them to grow the industry and have everybody in Southeast share and benefit from the industry,” he said.

It’s not a formal proposal, but the cruise association has already sued the capital city, challenging local control of how such funds are used.

But he takes a different approach.

He invited other community leaders to join the Southeast Cruise Port Association, which held its first meeting during the Mid Session Summit.

“I’m not under any illusion that we’re all going to cede local control of our communities to each other,” Watt said. “But I think we can get together on some very broad ideas.”

Those include improved communication and regional readiness for changes, such as quickly growing passenger numbers.

The industry’s share-the-wealth idea is of interest to Russell Dick, CEO of the Huna Totem Corp., which owns the Icy Strait Point attraction.

The renovated cannery and mile-long zip line completed its first dock two years ago, which brought more ships and visitors.

Dick said it’s looking toward construction of a second dock, which would support further growth.

“It’s all about tour capacity, having the infrastructure in place to handle the increase in ships and ship passengers,” he said. “And for us, that’s quite a bit. That’s a lot of people coming through.”

The cruise business is a significant part of Alaska’s visitor industry.

A cruise association report said ships, passengers and crew members spent about $1 billion during last summer’s season. And the passengers made up more than half of all visitors to the state.

Editor’s note: This report was updated to reflect cruise ships also brought a million passengers to Alaska in 2009.