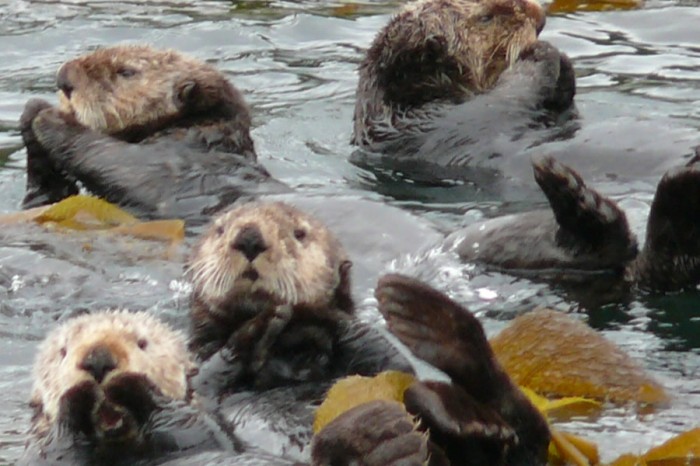 Sea otters groom their fur near Sitka. A Senate resolution calls for the federal government to work with the state and Native groups to curb Southeast’s sea otter population growth. (Photo by Nathan W/Creative Commons)

A Senate resolution seeking an increase in the number of sea otters hunted in Southeast Alaska is making its way through the legislative process.

SJR 13 was sponsored by Sitka Republican Sen. Bert Stedman. He said the resolution is a way for the state to ask the federal government to do something about Southeast’s increasing otter population.

“I think this is a good starting point for the conversation,” he said. “We live a different lifestyle up here, and we want to preserve it and keep it in balance. And having the sea otters virtually run unchecked in Southeast puts some of our communities in peril dealing with subsistence. As an example: Kake, I’ve been told, is down to one clam bed for the community. Everything around the community has been ate up by sea otters.”

As the resolution notes, after their population was decimated by unchecked hunting in the early 1900s, about 400 sea otters were reintroduced to the region in the mid-1960s. The population of sea otters has increased significantly since then. The resolution gives a 2010 estimate of 11,000, with an annual growth rate of 13 percent.

Sea otters are a federally protected species under the 1972 Marine Mammal Protection Act. Only Alaska Natives are allowed to hunt them. Stedman’s resolution calls for the state and federal governments to work with Alaska Native leaders to come up with a new plan to manage sea otters.

One suggestion in the resolution would allow Alaska Natives to assign their individual right to hunt otters to anyone with a state hunting license. Stedman said it’s practically impossible that anyone currently hunting otters for their livelihood would get pushed out by such a move.

“We’ve had difficulty even getting to the targeted harvest quota of sea otters of roughly – several years ago, it was 2,500, if I recall,” he said. “Now that number is going to be substantially larger because the mass has gotten bigger. I don’t believe that’s going to be the outcome of this at all.”

Stedman said the goal is to check the population and allow for a shellfish industry.

“What we’re trying to do here is get the attention of the U.S. Fish and Wildlife Service that we have a problem and ignoring it on their end creates a lot of problems for people who live in Southeast that rely on subsistence lifestyle to feed their families, and it also impacts our commercial shellfish industry substantially,” he said.

Another way to increase sea otter hunting would be a local, reasonably priced way to process pelts. But, Stedman said a tannery needs product, and more pelts would help such a business become feasible.

He stressed that he doesn’t want to eliminate sea otters in Southeast.

“And even if you go to their guideline harvest quotas, all you’ll be doing is slowing down the expansion,” he said.

SJR13 heads to the Senate Resources Committee for its first hearing next week.

The resolution isn’t Stedman’s first attempt at controlling the sea otter population in Southeast. He sponsored an unsuccessful bill in 2013 that called for a $100 bounty on sea otters.