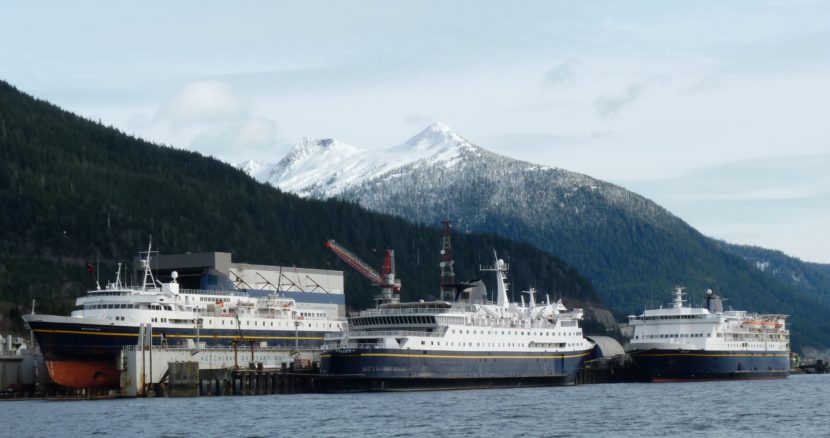 Three ferries dock at the Ketchikan Shipyard for repairs and storage in 2012. Legislation has been introduced as part of a marine highway reform project organized by port community leaders and the state. (Photo by Ed Schoenfeld/CoastAlaska News)

Three bills aimed at protecting the Alaska Marine Highway System are before the state Legislature. Two would stabilize funding and maintain routes. A third, addressing governance changes, is up for its first hearing March 8.

The state ferry system has seen significant cuts in recent years. While the routes remain the same, the number of sailings has dropped. One ship has been sold and another is tied up with no plans to return.

One measure, House Bill 377, would move nearly $200 million from the Alaska Permanent Fund’s earnings reserve into a ferry operations account.

Kito wasn’t available for immediate comment. But in a speech last fall, he pointed to schedules published before the system knew how much money it had.

“So if the budget passes on July 1 and the budget is significantly different from year to year, that we don’t have to work about the marine highway system having to terminate runs that have already been scheduled,” he said.

The money would fill a funding gap that could shut down the ferries this spring. It would also forward-fund the following budget year, which starts in July.

Forward funding is a significant part of the Alaska Marine Highway Reform Project, led by the Southeast Conference, which pushed to create the system about 50 years ago.

“I’ve really changed my tune, if you will, at least the verbiage or the syntax I’m using around this and it’s really stable funding,” he said.

Another measure introduced by Kito, House Bill 378, would put all ferry port communities into law. His office said that would keep officials from ending ferry routes without public debate.

Other legislation changing the ferry system from a state agency to a public corporation is also in the works. Kito has said he doesn’t expect his bills to pass in this year’s legislative session, which is supposed to end mid-April. But he wants to get the discussion going.

At a February meeting in Juneau, the Southeast Conference encouraged regional leaders to lobby lawmakers to make them aware of the issue. The ferry system also serves Southcentral and Southwest Alaska.

“This isn’t going to happen unless it’s important outside of the Capitol. … All the legislators need to hear that it’s important in their community and to their constituents,” she said.

The ferry reform project has collected information demonstrating the system’s value to the state.

“One of the resonating messages was that people do recognize the worth of the marine highway system. Not just to Southeast Alaska, not just to Southwest Alaska, but to all of Alaska,” he said.

The legislation faces opposition at several levels. Some lawmakers see the ferries as too expensive while others consider it state-funded competition to private enterprise.

Some don’t want to take money out of the earnings reserve. Still others, including Sitka Sen. Bert Stedman, say the bills will make the system vulnerable to further funding cuts.

Editor’s note: This report was changed to reflect that only one ferry reform measure will be before the House Transportation Committee March 8.