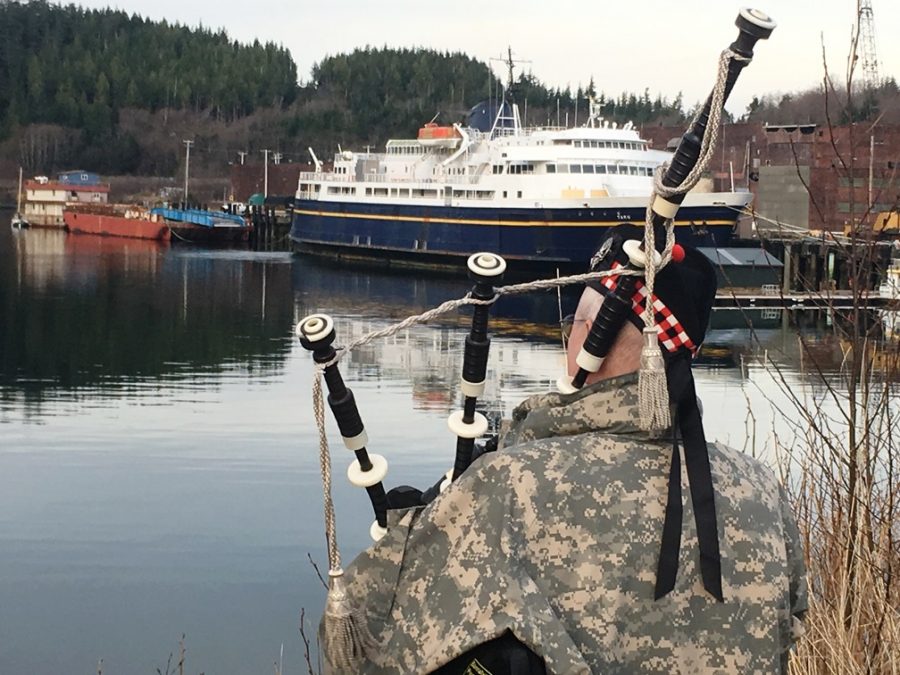 The former Alaska Marine Highway System ferry Taku left Ketchikan Tuesday on what is either its final voyage, or toward its new life as a ferry in another part of the world.

About a dozen people gathered early in the morning at Ward Cove to wish the Taku farewell.

Ketchikan bagpiper Rob Alley serenades the 55-year-old ferry Taku on her last day docked at Ketchikan’s Ward Cove. The Taku has been stored there since 2015, when the state took the ferry out of service.

Alley said he wanted to be part of the Taku’s farewell journey because that ferry was how he – along with so many others – first arrived in Alaska. Alley said it was 1992.

“And we slept out on the deck coming up here. We migrated up from Bellingham (Wash.) and it was a momentous experience,” he said. “I think there were other people on board coming up for the first time as well. The Taku, she carried us up here. It was like a member of our family. I’m getting kind of choked up just thinking about it.”

The Taku began its service in Alaska in 1963. It has carried countless people moving to Alaska, like Alley. It also carried Southeast Alaska school groups and so many others, traveling between communities for competitions and events.

Alley said the Taku and all the Alaska Marine Highway System ferries mean so much to the region. 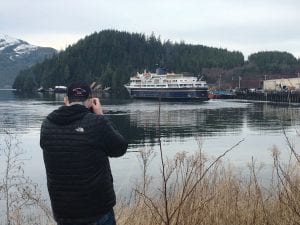 A Ketchikan resident takes a photo of the ferry Taku as it leaves Ketchikan’s Ward Cove. (KRBD photo by Leila Kheiry)

“It’s more than just a highway. It’s a superconnection between family members in one part of Alaska and another,” he said. “It’s not just about work and play; it’s about the family here that we have in Southeast Alaska.”

The Taku was taken out of service due to its age, along with maintenance costs and budget cuts. The State of Alaska decided to sell the ferry in 2017, with an initial minimum bid of $1.5 million. There were no takers, though, and the price dropped.

Jabal al Lawz Trading is the Dubai-based company that finally bought the Taku for $171,000. The sale became final in mid-January.

Company co-owner Ben Evans has said that the ferry is in great shape and they hope to sell it for further service as a ferry. Otherwise, it will be sold for scrap.

Capt. Bill Hopkins was among those watching as the Taku prepared to leave. He served on the ship in a variety of roles, and said he was a relief captain on board when the Taku made its maiden voyage to Bellingham. 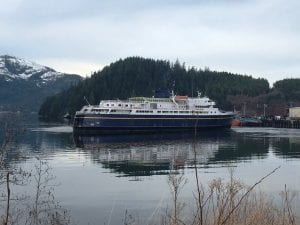 The Taku backs out of its docking space at Ketchikan’s Ward Cove. (KRBD photo by Leila Kheiry)

“I remember we got to the dock down there, a big greeting committee from the Port of Bellingham. They presented us with a big plaque with a ship’s bell on it. Really nice,” he said. “We put that on the Taku, but years later a passenger stole it. It disappeared. Somebody has a really nice trophy from the Taku.”

Hopkins has sailed on the Taku as third mate, second mate and chief mate, as well as relief captain. He said watching the Taku leave is a sad day.

“Because it’s going to happen to our other vessels, too,” he said. “They don’t last forever. Almost, though. It’s been a long time.”

Sounding its horn, the Taku backed out slowly. Everyone on shore took photos or videos, and a drone flew overhead shooting aerial footage. The ship rotated in the cove to face the Tongass Narrows before heading out.

From Ketchikan, the Taku’s planned 11,500-mile trip will take her first to Seattle, then Hawaii before sailing to the Philippines, Singapore and India.