Federal Emergency Management Agency officials have been working on new flood plain maps for Southeast Alaska, with implementation anticipated by early next year.

For Ketchikan and other areas, the new maps expand the number of properties considered in a flood-risk area. Those properties will be required to have flood insurance, if they hold a federally backed mortgage.

The number of Ketchikan properties affected by the change, though, is somewhat in dispute. 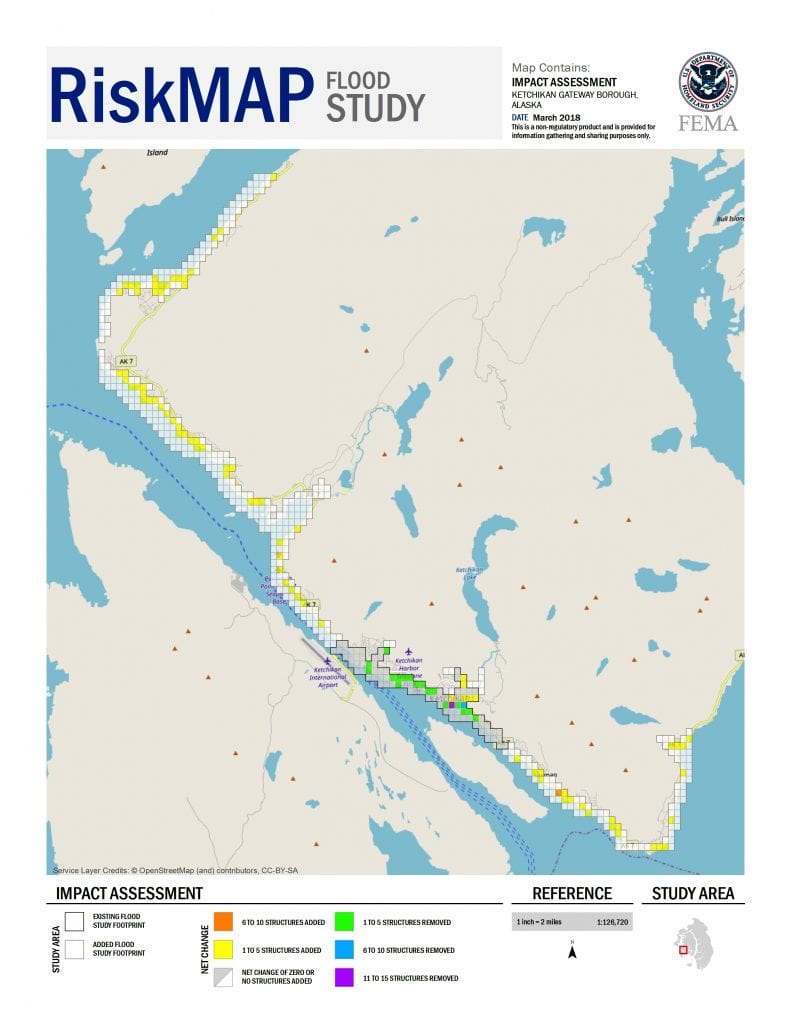 The Ketchikan Gateway Borough’s Planning Department has reported that the number of properties affected by the FEMA flood map expansion will go from 48 to about 1,100.

FEMA Region X officials say it will go from about 160 to about 270.

Let’s break down that disconnect, starting with FEMA’s numbers.

FEMA Regional Engineer Ted Perkins said the original maps from the 1970s covered less than 5 miles of Ketchikan’s waterfront – all within the City of Ketchikan. The new maps cover nearly 30 miles – pretty much the entire Ketchikan Gateway Borough road system.

“On the current effective maps, so the ones that go back to 1978, there are actually 161structures currently that are shown on the effective floodplain map,” he said.

On the new map for that specific area, Perkins said the number of structures in the floodplain actually drops to 101. But the new maps are expanded, so they cover way more of the community than that small area.

Now for the borough’s numbers. Principal planner Richard Harney said the 48 current properties are those that carry flood insurance based on the floodplain map requirements. So, there likely are more properties in the flood zone. They just don’t have to carry insurance because they don’t have a mortgage.

To get the 1,100 properties covered by the new maps, Harney said the borough took that proposed FEMA map, put it into the GIS mapper and searched for properties that intersect with the floodplain.

“And when we did so, it came up with all of the properties, including tideland parcels,” he said. “So we looked at parcels. We did not look at actual structures.”

So, for example, a property that’s not yet developed with a building on it still counts for the borough’s numbers.

“When FEMA went through and provided us these new numbers of actual structures, they went parcel by parcel, looking at each house, garage, greenhouse – structure – that were going to be included into the proposed floodplain,” he said. “We looked at parcels, they looked at structures.”

Perkins agrees that his numbers are based on structures in the floodplain. But he did look at affected parcels, too.

“So, a lot of coastal properties will have some land that kind of bleeds a little bit into where our floodplain mapping would show,” he said. “If you go by that, you can get the numbers up to 674 parcels.”

Closer, at least, if not in sync.

Whoever’s numbers are right, the takeaway is that more properties in the Ketchikan Gateway Borough will be part of the flood zone under the new maps.

There’s a larger debate about that. Some argue that coastal areas in Southeast Alaska don’t flood, so a flood insurance requirement is unnecessary. State Sen. Bert Stedman is a vocal opponent of the expansion, and has been looking into alternatives for affected communities.

The City of Ketchikan and Ketchikan Gateway Borough are working together to seek an extension of the floodplain map comment period.

Perkins said his office is under a statutory requirement of a 90-day review period. So, he can’t extend it. But

“I believe they’re raising it to the proper authorities, which is more our headquarters counterparts,” he said. “And they’ll provide a more formal, official response to that.”

In the meantime, Perkins said his office will continue to work with local officials and homeowners.

“We put a lot of effort in getting this information as accurate as we could, but again we are in the comment and appeal period, so this is the time to raise comments and concerns about the maps so we can make sure we get it right before we finalize the maps,” he said.

Perkins said he understands the added insurance requirement can be a challenge for individual property owners. But, he said, it’s important to know the risk.

The Ketchikan City Council on Thursday approved a resolution asking for a full year to evaluate and comment on the proposed new flood maps. The Ketchikan Gateway Borough Assembly will vote on a companion resolution on Monday.

You can read earlier earlier reports on the FEMA maps here and here.