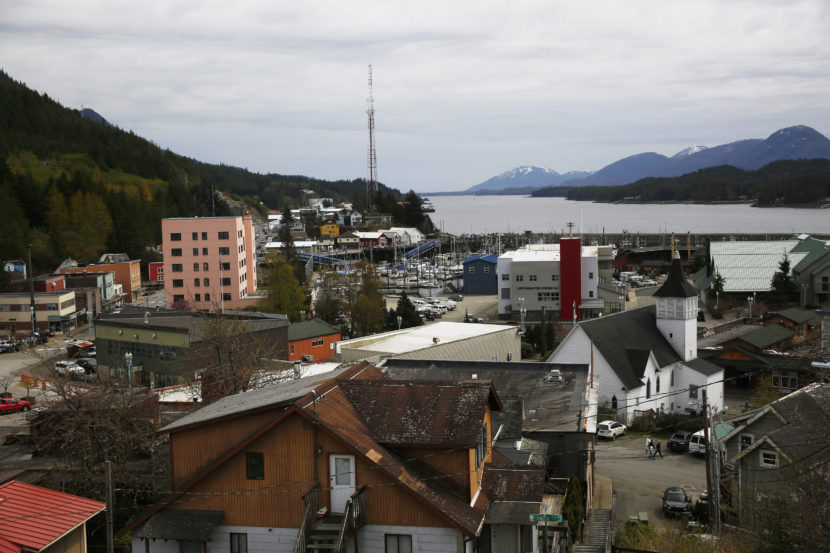 Downtown Ketchikan in spring 2017. The Southeast city is one of five without its own Alaska Native corporation. A bill before Congress would change that. (Photo by Elissa Nadworny/NPR)

It’s been almost a half-century since Congress passed the Alaska Native Claims Settlement Act, which created more than 200 corporations with land, money and shareholders.

It left out Ketchikan, Wrangell, Petersburg, Tenakee Springs and Haines, known as the landless communities.

Alaska’s Congressional delegation has introduced a number of bills over the years to address the situation. None has passed.

Supporters haven’t given up, and they said it’s not about money.

“It’s about the land, said Joseph Reeves, president of the Landless Natives of Ketchikan. “The land is our centerpiece and we ain’t ready to give up that idea.”

“Let’s have just a sliver of what we used to totally own,” he said. “And that’s all it is, 23,000 acres in Ketchikan out of the millions of acres around us that we always owned.”

He supports terms of the latest legislation, the Alaska Native Claims Settlement Improvement Act, which also includes provisions to transfer land in other parts of Southeast and the rest of the state.

“This is a matter of equity,” she said. “To have five communities that were left out was not right then and it’s not right to this day that they continue to be on the outs.”

The bill was introduced last summer and had its first hearing in February.

It remains in the Senate Committee on Energy and Natural Resources, which Murkowski chairs.

Its best chance of passing is to be part of a larger lands measure.

The bill is opposed by a number of environmental organizations, because it would transfer a total of more than 100,000 acres of Southeast’s Tongass National Forest to the five new corporations.

“Under the guise of correcting past wrongs, Sen. Murkowski is pushing ahead with a bill that will create a whole bunch of new sets of problems in Southeast Alaska and around Alaska by privatizing up to 600,000 acres of land in our state with very few protections for areas that currently are public resources,” he said.

The Southeast Alaska Conservation Council, or SEACC, also opposes the measure as written.

There’s no consensus on why the five communities didn’t get their own corporations.

Some have said they weren’t historically Native communities or didn’t have large enough Native populations.

A University of Alaska study showed strong similarities to other communities that did get corporations.

Others said the Forest Service and the then-thriving timber industry didn’t want to lose access to the land.

Still others have said it was a paperwork mistake in the rush to pass the legislation.

Reeves thinks that like its predecessors, this bill may not make it through Congress. But he and others will continue the work begun decades ago by people who are now elders or have passed away.

“We still have their children and their children’s children here that will benefit from this,” he said. “It will help them in their seeking of an identity as an Alaska Native person in this community. To be a part of an ANCSA corporation is something that we hope will help our people for generations to come.”

Most of the people who would gain stock in the new corporations already are shareholders of Sealaska, Southeast’s regional Native corporation. That’s the case for most members of the region’s other 13 urban or village corporations.