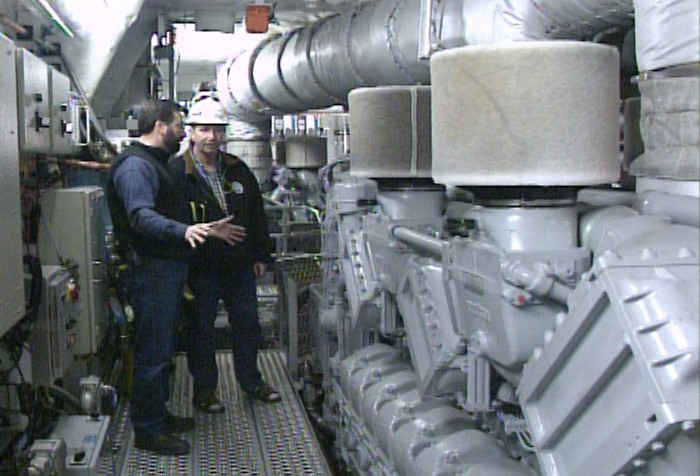 The ferry Fairweather’s engines run on diesel. Marine highway officials are not considering replacing them with electric engines. But they’re installing dual-fuel engines that could use natural gas on three ships. (Skip Gray/KTOO)

Washington state is considering converting some of its ferries to electrical power, and its Legislature recently voted to spend $600,000 to study the option.

Alaska, on the other hand, is not. But officials here are considering a different alternative ferry fuel.

Alaska’s nine working ferries all burn diesel, which is expensive.

It also contributes to climate change, which melts sea ice and permafrost, damaging roads and communities.

So it would make sense for the state ferry system to look for alternatives, such as electricity.

“It’s not a new question. This question has come up in years past with the marine highway,” said Capt. John Falvey, general manager of the Alaska Marine Highway System.

He said research showed it would be much harder to make electrical engines work in his fleet.

“Because we run longer, on average, routes than Washington State Ferries does, with their entire fleet being a day fleet where they will stop once a day to be able to recharge their batteries,” he said. “(It) makes it a little tougher for the marine highway.”

Falvey said the most likely ship to be converted would be the Lituya. The small ferry sails a short route connecting Ketchikan and Metlakatla, in southern Southeast.

He said electric engines also might work in Prince William Sound and northern Lynn Canal, which also have some short routes.

The cost would be high at a time when the ferry system barely has enough money to keep its fleet sailing.

He said other challenges include the time needed to recharge batteries and the availability of cheap electricity at some ports.

“Not to say technology hasn’t changed. And maybe we look at it again,” he said. “That’s something that I could do if I was asked.”

“I think the price of the batteries has been a key factor,” he said. “And as that price comes down, it will open up opportunities for entrepreneurs to figure out ways to displace fossil fuel-burning motors with electrical motors.”

“Right now, LNG is cheaper than diesel fuel and it burns a lot cleaner,” he said. “We are seriously looking at that.”

The marine highway is installing engines on two new Alaska-class ferries that will burn either diesel or natural gas. The small ships will link Juneau, Haines and Skagway.

The same will happen when a replacement for the large Southwest ferry Tustumena is built.

“Some of the issues with LNG in the past has been the supply chain coming into Alaska,” he said. “But it appears that as time goes by that may become less and less of a problem.”

He also said onboard storage could be tricky. Safety rules are very strict and have limited LNG use on passenger vessels.

Those rules are evolving, he said. And cruise ships that run on natural gas are being built and put into service.