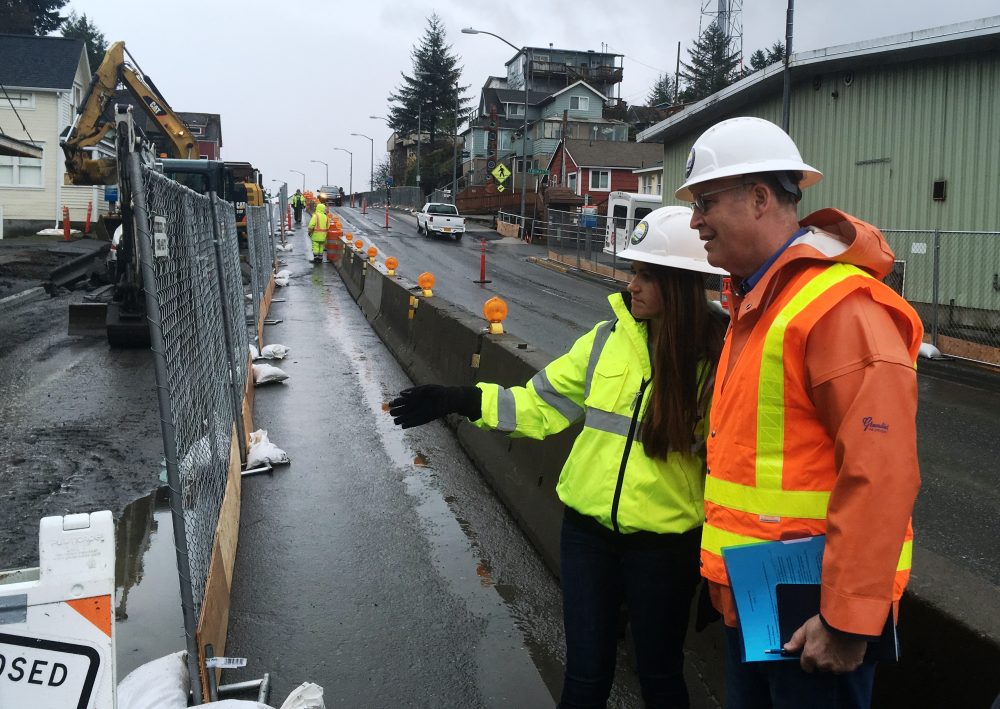 Marc Luiken was in Ketchikan Friday to inspect some road work, talk with DOT employees and meet local officials. He also sat down briefly with Ketchikan reporters to discuss what’s in the works for the area’s state-maintained transportation services.

A common complaint in Alaska’s First City this winter has been about all the potholes on Ketchikan’s main road. And it seems like this year has been worse than previous winters.

Commissioner Marc Luiken said the weather has created more road problems this year with multiple freeze-thaw events. Various factors determine how quickly road repairs can take place. One of those is funding, which has seen a steep cut.

“We have less people, we have less equipment, we have less stuff,” he said. “That has an impact on how quickly we’re able to respond. We’re sometimes down to two people in the shop out there.”

Luiken said DOT’s operating budget has been cut by about a quarter, and that affects the department’s ability to perform regular maintenance, as well.

The state-run ferry system also has been experiencing maintenance problems, but Luiken said that’s more a reflection of an aging fleet. Budget cuts have had an effect on ferries in other ways.

“Probably the biggest impact the budget has had on the ferry system is just our ability to provide service in general,” he said. “The frequency and where we’re sailing.” 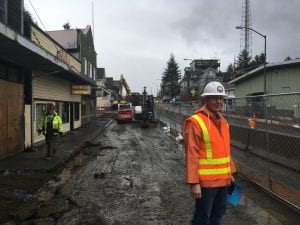 Luiken said they were able to find a way to add days of service back to the Alaska Marine Highway System schedule this year, even with the reduced budget. But the problem of old ships remains.

DOT has plans to build a new state ferry with the help of federal highway funding. Because of the federal funding, Luiken said, the Tustamena’s replacement would be open to all U.S. shipyards for bidding. Timing depends on funding approval.

The planned replacement ship would be larger than two ferries built mostly in Ketchikan at the Vigor Alaska shipyard. “Mostly” is because Vigor decided to build part of the second ferry, the Hubbard, in one of its shipyards Down South.

“As a matter of fact, we just sent the engines for that ship down there,” he said. “That’s the module they decided to build down there was the engine module. It’s fairly complicated.”

Luiken said building that portion of the Hubbard elsewhere was a business decision by Vigor to get the project done more quickly, although the deadline still likely will not be met.  He said the state and Vigor continue to talk about potential repercussions for missing its deliver-by date.

“We are working with them. I just got through having a conversation with them,” he said. “They are a very valuable partner for the system and for our state. We want to try and keep the best relationship we can, and work with them to help them be successful.”

Luiken said some of the problems Alaska’s ferry system is experiencing could be solved by moving to a private-public model similar to the Alaska Railroad.

“Creating a corporation or an organization that is allowed to build a long-term plan and then actually execute that long-term plan, that’s going to be way better for our state,” he said.

Luiken said such a model would not be affected as much by frequent changes in state leadership.

Luiken talked about a big-ticket item for Ketchikan: the long-awaited Gravina Access improvement project. He said the first portion of that approximately $90-million project will go out for bid as early as this summer, with construction starting early in 2019. That’s the Airport Creek Bridge.

The overall plan to improve access to Gravina Island, where Ketchikan’s airport is located, calls for new passenger waiting areas and ferry berths on both sides of the channel, parking improvements, two new airport shuttles and a hiking trail to Black Sands Beach.

Luiken said all those items were identified by local officials.

“Once we announced and once the governor announced that we were going to put this money back into Ketchikan, then we sat down and had a negotiation with the borough – what projects would fit into this overall big project,” he said.

Funding for Gravina access improvements comes from what’s left of a 2005 earmark originally meant for a bridge to Gravina. That project was canceled, and most of the $360 million was directed to other transportation projects in the state.

Luiken spent some time during his stop in Ketchikan visiting road construction work on Stedman Street, which started a few weeks ago. That project begins with sidewalk improvements, and will be followed by paving on the road itself. It’s the first phase of a complete re-do of Front, Mill and Stedman streets through Ketchikan’s downtown corridor.

We had an earlier story listing most of the planned DOT transportation projects in Ketchikan and surrounding areas. Here’s a link to that report.