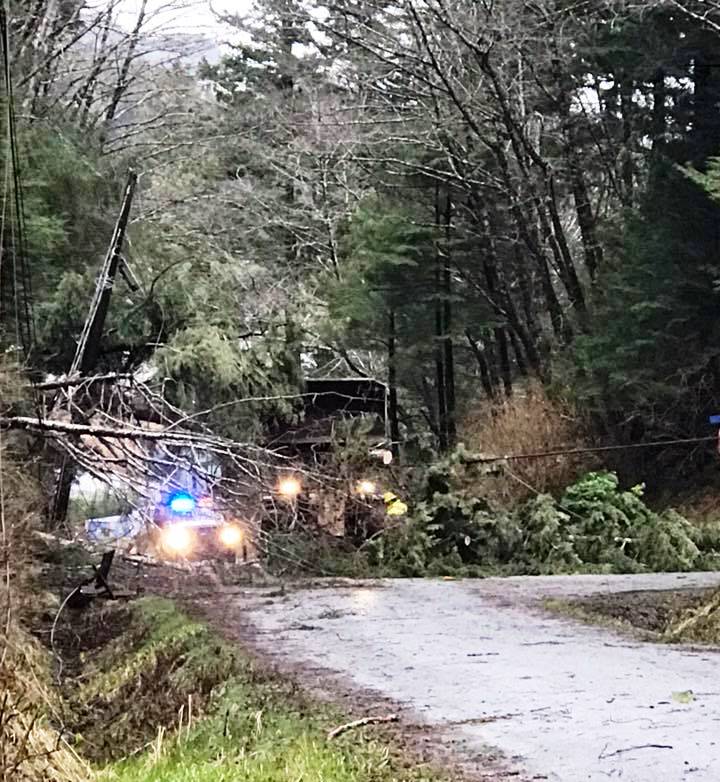 Ketchikan was warned Tuesday morning to expect a big storm that afternoon, and they weren’t kidding. Weather spotters clocked sustained winds around 70 mph and gusts exceeding 100.

The storm knocked down trees and power lines throughout the community, keeping repair crews busy through Wednesday morning.

A fast-moving storm whipped through Southeast on Tuesday, with the biggest winds hitting Alaska’s First City.

Sharon Sullivan is a meteorologist intern with the National Weather Service in Juneau. She said mid-morning Wednesday that the storm-force low developed rapidly in the morning near Haida Gwaii in British Columbia, south of Ketchikan.

“It developed yesterday morning and affected a lot of the southern Panhandle and reached the central gulf by late last night,” she said. “It’s already on its exit in the northern gulf right now.”

According to the National Weather Service, the highest recorded gusts were in Ketchikan, but everyone in Southeast experienced a strong storm.

“At Salmon Landing in Ketchikan, gusts up to 112 mph were recorded,” she said. “We also have Lincoln Island at 74, Ketchikan Airport at 73, Annette Island at 69, at Wrangell Airport it was about 45. Those are some of the ones on the higher end.”

While the official NWS report for Metlakatla was a high of 69 mph, residents report that wind gusts were much stronger.

Sullivan said Prince of Wales Island also reported high winds. The storm hit the west coast of the big island first, with gusts up to 77 mph, and sustained winds around 60.

“Hurricane-force winds” are sustained winds – not including gusts — of at least 74 mph, according to the National Oceanic and Atmospheric Administration.

Sullivan said Wrangell reported some trees down and shingles blown off a roof. In Ketchikan, though, pretty much an entire roof blew off of a home on Jackson Street, according to Andy Donato of Ketchikan Public Utilities Electric Division.

That led to one of many wind-related power outages. An event affecting the most people was in the Mountain Point area, and brought traffic to a halt on South Tongass Highway.

“There are some trees pulling down the lines in that area, caused some problems,” she said. “We had to shut the highway down for a while. It was unsafe to cross there with the power lines being stretched down.”

Donato said some people weren’t happy about the road closure, which was announced a little after 5 and kept a lot of people from getting home until after 7:30 p.m. But, he said it was a serious safety concern. The tree leaning into a live power line meant the line was essentially grounded.

“If one of the higher lines, which is energized, touches that tree or a branch just tickles that, it’ll bring that voltage down to ground, and if you’re standing in and around the area – all the same people thought they could just leave their cars and walk, I told them, ‘No, I can’t let you do that. You can’t walk over there,’” he said. “That’s because you have something called a high ground potential. And, it’s dangerous.”

That incident was one of many. Donato listed some highlights: “Trees in the line near that Tongass fire hall. There was a transformer fire in the Bear Valley area. Up on Sunset Drive, trees blocking roadway. Top of a pole was broken in the D-1, D-2 area further north. We had trees in the line at South Point Higgins, trees in the line out toward Knudson Cove.”

One positive aspect of the storm was its short duration. The wind started picking up around 3 p.m., and was dying down by around 6. Donato said that gave repair crews better working conditions to fix all the damage.

“Because it’s really difficult working out of a bucket truck say 70-80 feet in the air when it’s blowing around say 40, 50, 60 mph,” he said. “Fortunately it really calmed down and we got after it.”

Donato said most areas had power back by around 10 p.m. Tuesday, although a few individual homes remained without electricity through Wednesday morning. He thanked the community for understanding and supporting KPU line crews.

Also out working in the storm were U.S. Coast Guard boat and helicopter crews. There had been a report of a possible overturned skiff during the wind storm. A Coast Guard spokesman reported Wednesday morning that the skiff was eventually found safely moored, and the occupants were fine.