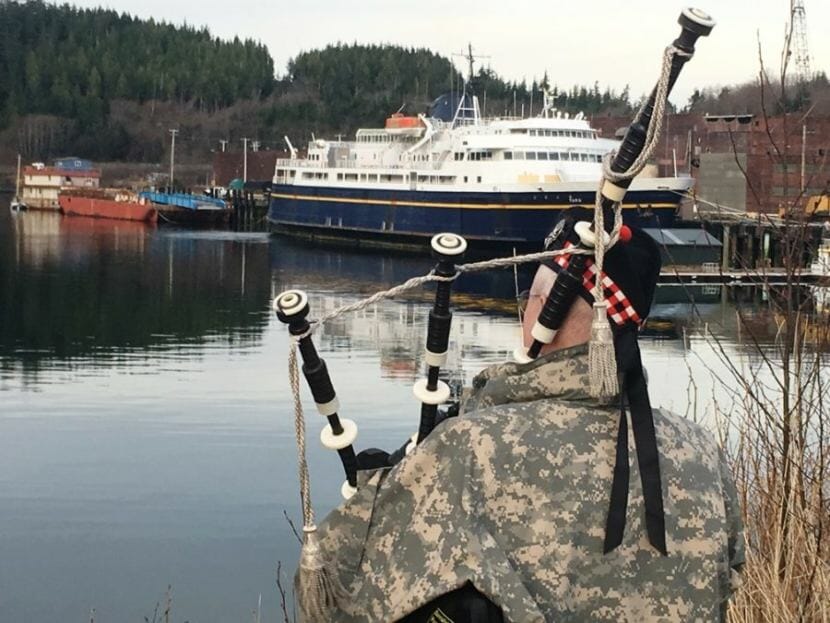 Rob Alley plays the bagpipes as a send-off for the ferry Taku as it departs Ketchikan’s Ward Cove on March 13, 2018. Alley first arrived in Alaska aboard the Taku in 1992. Now, the ship is headed to the scrapyard. (Photo by Leila Kheiry/KRBD)

The former state ferry Taku sailed past Singapore on Friday on the way to being scrapped. It will go for close to 10 times its purchase price.

The Taku left Ketchikan’s Ward Cove, where it had been stored, March 13. The company sailed it across the Pacific Ocean in hopes of finding a buyer to keep it in service. But negotiations with interests in Singapore and Fiji didn’t work out.

Co-owner Ben Evans of New Zealand said it will end its sailing days in India later this month.

“She’s going to go to the scrapyard and sold for demolition. So that’s the end of the Taku,” he said, calling it a tragedy. A Petersburg fishing boat passes the ferry Taku near the entrance of Wrangell Narrows in August, 2013. (Photo by Ed Schoenfeld/CoastAlaska News)

Evans said his company will probably get about $1.5 million for the ship. But sailing it 12,000 miles across the Pacific was expensive.

State officials put the Taku up for sale a little more than a year ago. The original minimum bid was $1.5 million. But it took several tries to sell it, each with a lower price.

The Taku has not been a working ferry for several years. It was tied up in 2015 because of its age, as well as budget cuts.

Robert Venables heads up the state’s Maine Transportation Advisory Board. He also works for the Southeast Conference, which pushed the state to start the ferry system more about 60 years ago.

“It’s not surprising, but it does leave you with a little bit of sadness that she’s not going to be in service,” he said.

Evans said most of the Taku will be recycled. Some parts, such as generators, will be sold whole.

The cut-up hull will be reprocessed into rebar. Among other things, it’s used to strengthen concrete in building construction.

Co-owner Evans said an investor in Fiji wanted to use the Taku as a ferry. He said interests in Singapore were interested in retrofitting it into what’s called a superyacht.

But all backed out.