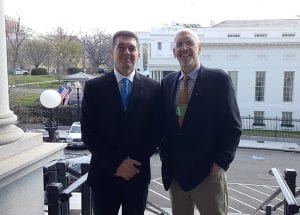 Representatives of Ketchikan made a historic visit to the White House on Tuesday to meet with the Trump administration, and talk about concerns that directly affect Ketchikan residents.

“Seemed like a good idea, so we drafted a letter,” Landis said. “Mr. Dial started it, and then we all took a crack at it and I signed it as the mayor and sent that in to the White House. Sure enough, we got an invitation back to visit.”

Landis said the borough delegation got a little help with that from Sen. Dan Sullivan’s office.

Landis said they were able to talk with Trump administration representatives about a full range of issues. He said they were especially focused on the planned Federal Emergency Management Agency flood zone map expansion.

“The issue from our point of view is that this could result in substantially higher insurance premiums for those coastal properties that would be affected by those new maps,” he said. “We had some specific requests of not only the agency, FEMA, but of the Congressional Delegation as well as this meeting at the White House there.”

Landis said White House officials pledged to follow up on that concern with FEMA, and to 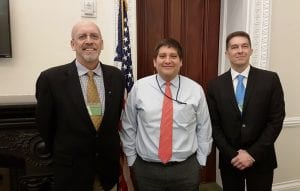 collaborate with Alaska’s congressional representatives to address those issues.

Landis said Dial then asked whether they could meet President Donald Trump.

“Unfortunately, the answer was that the Syrian crisis would prevent that from happening,” Landis said. “Ordinarily, he would have seen if that was a possibility. It was quite remarkable, really.”

This is likely the first time Ketchikan representatives have met with such high-level government officials. Landis said there’s no record of a similar visit.

In addition to the White House visit, Landis said they met with federal agencies, including FEMA, and Alaska’s delegation. He says Sen. Sullivan stepped out during a break in a lengthy hearing with Facebook founder and CEO Mark Zuckerberg.

“So there were press cameras outside the break room just kinda waiting to see if they could catch a picture, I guess, of Mr. Zuckerberg as he left through that room, or of the senators going in and out,” Landis said. “It was quite a zoo.”

He said the local delegation fit a lot of meetings into two days. Dial and Duran left on Wednesday. Landis stayed a little longer to meet with other federal agencies, such as the National Oceanic and Atmospheric Administration.