A Ketchikan middle-school student is headed to the Scripps National Spelling Bee in late May.

Grace Parrott won Ketchikan’s districtwide spelling bee in late February, and went on to compete in the state bee in Anchorage. She didn’t win that competition, but she still gets to go to nationals. 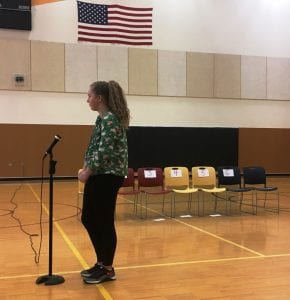 Grace Parrott was the last speller standing during Ketchikan’s spelling bee in February. She won with the word Haversack. (KRBD file photo by Leila Kheiry)

Of course, whenever you’re in a competition the goal is to win. Even though she didn’t win the statewide spelling bee in Anchorage, though, Grace Parrott was overall pleased with her performance.

She said it was a lot of fun, and very different from the district spelling bee she won earlier this spring, which had just six competitors.

“It was a little intimidating at first. But as we started getting into it, I kind of lost the anxiety,” she said. “It was kind of similar to what I’d experienced before at the district level, but at the same time it was like a whole new thing entirely.”

The national bee in Washington, D.C., will take that to an even higher level.

Grace is able to attend that national competition through a brand-new program Scripps offered this year called RSVBee. It allows more students to participate in the Scripps National Spelling Bee, especially those from under-represented areas.

About 200 students were picked through that new program, and Grace found out she’d been accepted just before the state bee.

When she didn’t win state, she said she debated whether to attend the national bee.

To attend the Anchorage bee, Grace did a lot of fundraising for travel expenses. She’s fundraising again to help pay for Washington, D.C.

Grace said she enjoys spelling, and figuring out how to spell certain words based on their origin. She kinda skirted a question about how much she enjoys reading, but her mom, Katie Parrott, didn’t let her get away it.

To prepare for the national bee, Grace said she’s studying spelling words two hours a day. She was sent a whole new list of words.

“They’re way, way harder than the other ones,” she said. “I can’t even pronounce like half of them! But I bet by studying hard I can probably spell them.”

According to Valerie Miller of Scripps, the digital database shows no previous Ketchikan student has participated in the national bee. But in 2010, then-eighth-grader Oliver Price of Craig was a national competitor.