At a recent Ketchikan Chamber of Commerce luncheon, Borough Mayor David Landis gave an overview of the borough’s responsibilities and accomplishments in 2017.

The Ketchikan Gateway Borough is responsible for public school education, land use planning, property assessment and tax collection. Landis discussed those mandatory powers as well as other services.

“This is the only state-owned, borough-operated airport in the state, and there are 200 and some airports. The state actually likes it pretty well because they don’t put in as much money as they do to their own airports. We’ve been surprised that the state hasn’t pushed for more airports to be operated this way because it actually does work quite well.”

Landis says accomplishments at the airport last year include completion of the aircraft rescue and firefighting building, installation of “My World” artwork in the terminal, and a new trash compactor resulting in $30,000 in annual savings.

He says a major renovation was completed at the Pat Wise Animal Shelter.

“This improved not only animal housing and viewing areas, but has a much better visitor and volunteer traffic flow, and handling of animal contagious disease cases and feral cat management.” 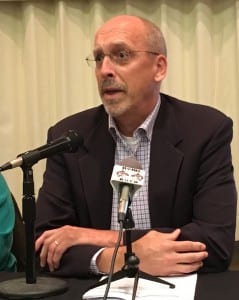 Landis says another duty of the borough is to enforce codes.  He says in 2017, 136 junk vehicle vouchers were issued. This program pays for the disposal of junk vehicles. Landis says the borough also worked with the Coast Guard to dispose of 7,000 pounds of waste.

“These are large, heavy, solid-waste items. These items collect in what you might call ‘traditional dumping sites’ around the island along Tongass Highway as well as Revilla Road – vehicles, a boat trailer, tires, things like that.”

The Gateway Aquatic Center and Gateway Recreation Center are operated by the borough. Landis says FY2017 was the facility’s highest revenue year, with more than 237,000 visits.

Regarding borough transit, Landis says revenue is up, but ridership is slightly down.  He says the revenue increase is due to a fare hike from $1 to $2 per ride. Added that grant funding was secured for several new buses.

Another highlight is upgrades to Dudley Field, including installation of grandstands.

“There actually was a complaint filed under the Americans with Disabilities Act to have access to the field and the bathrooms. So this resolved that complaint. (We) actually got some Land and Water Conservation Funds to be able to do it. And that project was about $215,000.”

Landis also spoke about major school district maintenance projects including the sidewalk at Fawn Mountain and the drop-off area at Houghtaling Elementary School.

Landis says the borough’s strategic plan for 2018 to 2023 is on the borough’s website. It highlights projects focusing on health and safety, the economy, transportation, quality of life, and organizational excellence.