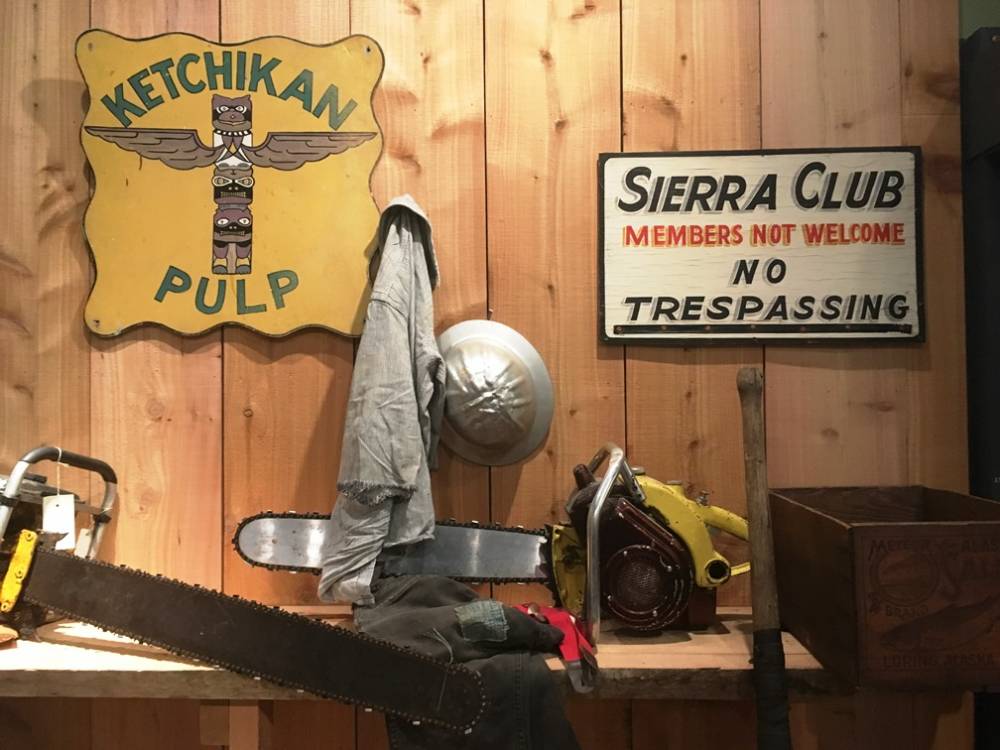 What is Ketchikan? That question is at the heart of the Tongass Historical Museum’s new permanent exhibit, set to open on Friday, April 27. KRBD’s Leila Kheiry had an early preview of “Ketchikan Is” while museum employees were still working on installing the exhibit, and prepared this report.

It’s about two weeks to opening day, and Ketchikan’s downtown museum is in a state of controlled chaos. Boxes and crates fill the foyer, artifacts with temporary tags are lined up on tables, glass panels are stacked against a wall waiting to enclose display cases.

“It just looks like chaos,” said Museum Director Anita Maxwell. “This is the – I was going to say the calm before the storm, but I think this is well in the middle of the storm.”

If Maxwell looks a little stressed, she has good cause. The museum is not only finishing up its new permanent exhibit, staff members are installing a new temporary exhibit at the same time. 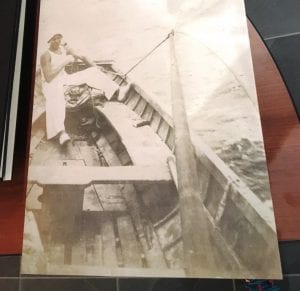 Let’s start with that. A Wrangell-born man named Michael Nore who now lives in Washington has a big collection of historic photos from all around southern Southeast Alaska.

She said they made copies of the originals, and those copies will hang in the temporary exhibit space for the next six months. “Collected Memory” will open at the same time as the permanent exhibit.

The museum has been working toward that for more than a year, with plans really ramping up last April after renovations to the entire main floor of the city-owned museum were completed.

At that point, the space dedicated for a permanent exhibit was completely empty and felt huge. Maxwell said it seemed to get smaller as they divided up the space into themes to define Ketchikan. 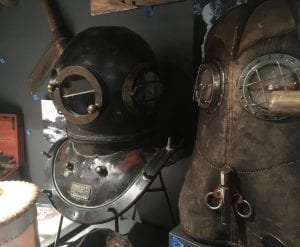 “Steven Villano, our curator of exhibits, did an amazing job of how to help people flow through the space, use it in a creative way and create little niches within where you can really immerse in the different subjects,” she said.

And what is Ketchikan? We get a lot of rain, we’re surrounded by oceans, we’ve got streams and lakes. Naturally, for the first theme: Ketchikan is water.

“Really, starting with: ‘What makes Ketchikan so unique?’ Today is a perfect example of that, of just the immense amount of water that we deal with,” Maxwell said.

You could guess it was raining that day. It’s raining today, too. And probably will rain again tomorrow.

“Look out these windows and see the creek and think about our beginnings as a Tlingit fish camp,” Maxwell said. “What did that then mean about how people made a living here?”

“And over here in this other corner, we see a light that was from Creek Street,” Maxwell said. 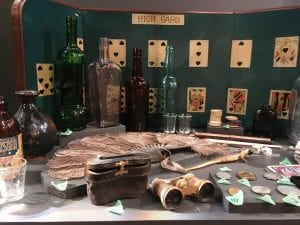 A display in the Creek Street section of the Tongass Historical Museum’s new permanent exhibit. (KRBD photo by Leila Kheiry)

Because Ketchikan also is a little rowdy — a little wicked at times. Creek Street, with its bars and “sporting women” provided an outlet for many years. It’s now a tourist haven, with former brothels offering souvenirs instead of bootleg liquor and female company.

The permanent exhibit has more displays on Ketchikan as an island community, relying on itself for almost everything. It showcases air travel, timber harvest, the pulp mill, health care, entertainment, sports.

And, even separated somewhat by themes, it’s all integrated. Alaska Native regalia is next to a bowling shirt, for example. Maxwell said that was done on purpose.

While the new exhibit is permanent, it’s not static. Maxwell said as they identify gaps in the community’s story, they’ll work to fill them and provide a complete picture of what “Ketchikan Is.”

The Tongass Historical Museum’s opening reception for Ketchikan Is starts at 5 p.m. Friday, and lasts until 7. 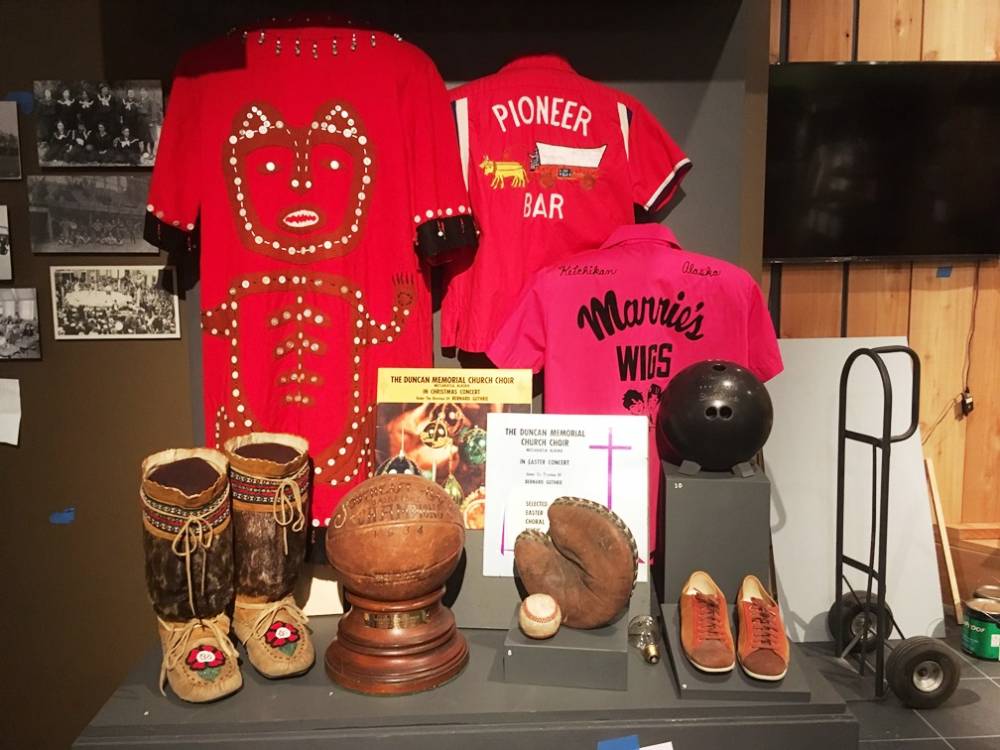 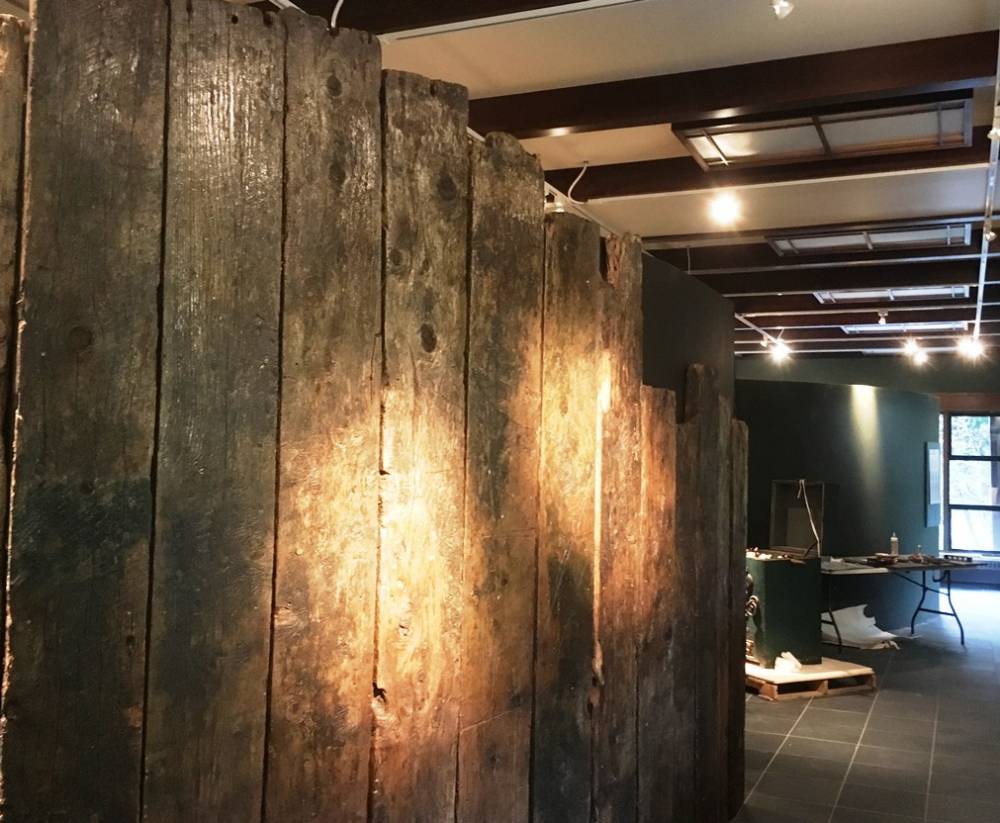 Salvaged boardwalk from Hopkins Alley lines some of the walls in the Tongass Historical Museum’s new permanent exhibit. (KRBD photo by Leila Kheiry)