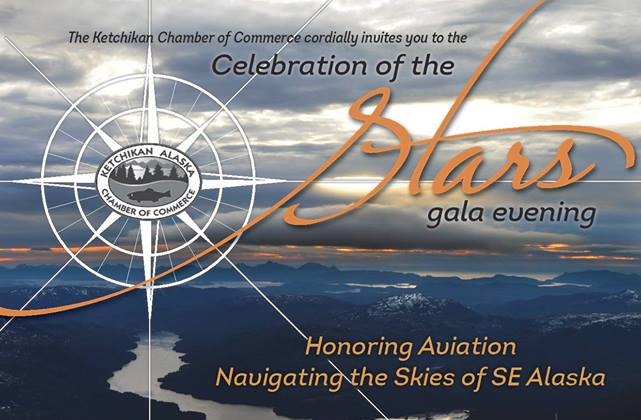 Celebration of the Stars 2018.

The Greater Ketchikan Chamber of Commerce gave out its annual awards Saturday night during the Celebration of the Stars banquet. Five awards were presented.

Tore Lynne was named Citizen of the Year.

“He just does an amazing amount of work volunteering for the court system here. Shredding documents and doing things that the attorneys and the D.A.s don’t necessarily the time or energy to do, or the staffing to do, and he just comes in and volunteers – I think up to 600 hours a year, which is pretty amazing.”

That’s Chamber president Chelsea Goucher.  Goucher says the Rev. Evelyn Erbele was honored as Volunteer of the Year. Eberle is a pastor at the First United Methodist Church.  Goucher says Erbele was recognized for her work helping to keep the First City Homeless Services shelter open, and advocating for the homeless population.

A new award is Emerging Leader of the Year. Goucher says this was given to Ketchikan Gateway Borough Assembly Member Felix Wong.

“Because of all of the volunteer work he does in the community for various organizations from Ketchikan Theatre Ballet to the Arts Council. Of course he’s had his photography exhibited, done a tremendous amount of work for Vigor when he was there, and he’s now started his own business and is branching off.  He’s just kind of a can-do guy that’s always there to help.”

The Business of the Year is Island Air Express. Goucher says it received the award, in part, for providing safe and consistent service between Ketchikan and Prince of Wales Island.

Entrepreneur of the Year award was given to Ucore Rare Earth Metals.

“We’re just very excited for a clean, green extraction method for rare earth metals, and the prospect of a rare earth metals mine on P.O.W. (Prince of Wales Island) that would be able to take advantage of that green technology. And really create jobs and economic benefit for Ketchikan, and also the country since some of those metals are strategic and we’re getting those from China where they are not being produced in a clean manner.”