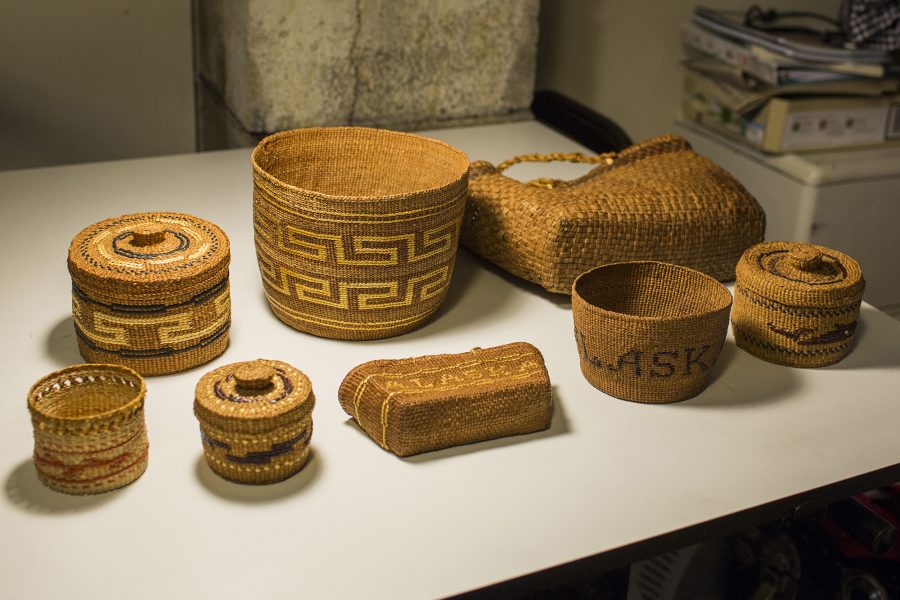 A Metlakatla-based nonprofit organization worked with the Smithsonian Arctic Studies Center to develop a series of instructional videos that teach the community’s unique form of basket weaving. It comes with an accompanying bilingual guide in English and the Tsimshian language.

Kandi McGilton and David R. Boxley are two of the Haayk Foundation’s co-founders. They say the whole project started during a conversation with master weaver Holly Churchill.

Boxley said he had mentioned how some original Sm’algya̱x words for formline design elements have been lost.

“ As a result of potlach being outlawed, so the old masters stopped producing the work so the words stopped being used,” Boxley said.

“So, she suggested that we start documenting the different art forms (in Sm’algya̱x) and naturally weaving came up because she’s a weaver and I’m a weaver,” McGilton said. “And it kind of just snowballed from there.” 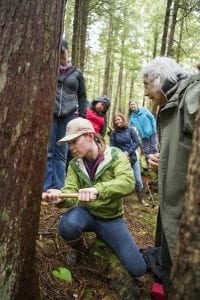 Boxley and the foundation’s third co-founder, Gavin Hudson, flew up to Anchorage and met with Anchorage Museum officials, who agreed to help support the project. Other backers joined the effort, including Smithsonian Arctic Studies Center in 2016.

Boxley said the center has supported other projects to preserve endangered art forms.

“It’s really the one art form that is uniquely from Metlakatla, Alaska, from Annette Island,” he said. “We felt it important to preserve that and preserve our language by making this bilingual guide.”

“We had a week-long workshop twice in Metlakatla. One for the harvesting of cedar, maidenhair and canary grass, and again in the fall to actually weave the baskets,” she said.

Those workshops were led by master weavers Delores and Holly Churchill. McGilton is their apprentice, and is featured in the videos.

For the guide, McGilton said she worked with fluent Sm’algya̱x speaker Sarah Booth. 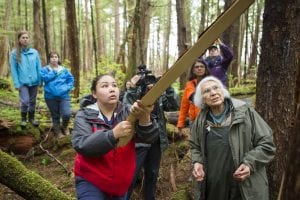 Delores Churchill instructs student Jamie Thompson on how to pull bark from a red cedar tree in Metlakatla. (Photo by Wayde Carroll)

“We wrote down from start to finish the instructions on how to weave a basket, and then translated the entire thing into Sm’algya̱x,” she said. “So there’s a 54-, 55-page weaving guide that’s all in the language.”

McGilton and Boxley say their own language skills improved significantly through this project.

“It definitely helped with forming our own sentence structure,” McGilton said. “We’ve become quite skilled in writing Sm’algya̱x.”

“Thanks to Sarah, we’ve done so much transcription from listening to her translations,” Boxley added. “She’s just wonderful and infinitely patient with us learners.”

Boxley said there’s been a great response so far to the free instructional videos and guide. Now that this project is complete, he said, they do have others planned. One is a bilingual history of the Alaskan Tsimshian.

“So much of the Tsimshian history is based on the folks that didn’t leave who are still living over in B.C. or primarily on William Duncan,” he said. “I think it’s an interesting thing to put it back in context of where we fit as Alaskan Tsimshians in the total history of Tsimshian people.”

More than 130 years ago, the ancestors of Metlakatla’s current residents traveled from British Columbia to settle on Annette Island near Ketchikan. William Duncan was an influential Anglican lay-priest who worked with those original settlers to build their new community.

Boxley said Sarah Booth is helping with the Sm’algya̱x version of that project, as well.

You can order the free videos and guide on the Haayk Foundation’s website.

Here’s a link to a story with more information about the Annette Island weaving style.