The City of Ketchikan Police Department soon will be fully staffed, but not for long.

City Police Chief Joe White wrote in a memo to the Ketchikan City Council that two officer applicants are in the final phases of the recruitment process for one vacancy. When the job is filled, the department will have a full staff until May 21st. 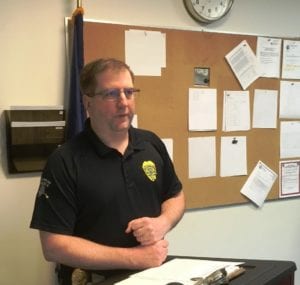 That’s when Deputy Chief Josh Dossett will retire. In addition, White writes that two other officers have given notice that they will be leaving in June and July. Because of that, White has asked the city council to approve funding so he can hire both of the current officer applicants.

That would put the department one over its allotted 23 officers, he writes, but only for a short time.

City Manager Karl Amylon recommends that the city council approve the police chief’s request. The council will consider that on Thursday, during its regular meeting.

Also on Thursday’s council agenda is a second reading of an ordinance to designate the city’s marijuana tax proceeds to fund homeless services.

Council members also will consider a recommended liquor license protest for a planned brewery on Water Street. The basis of the protest is the lack of a building code permit application, and subsequent inspection by the city’s fire marshal.

We should note that the planned brewery is co-owned by a KRBD board member.