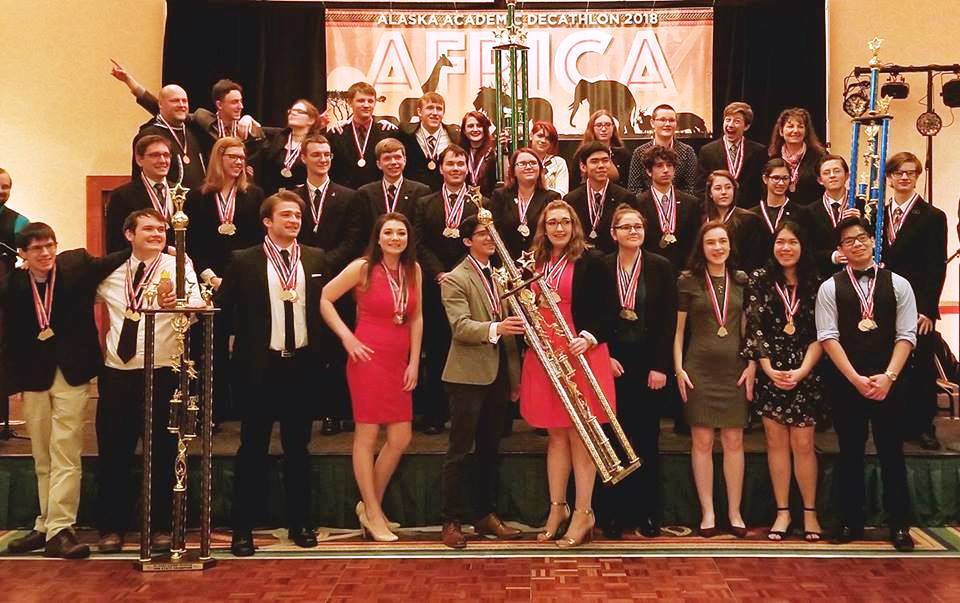 On Tuesday the Ketchikan High School Academic Decathlon team was honored during a special assembly. In attendance were Governor Bill Walker and Lt. Governor Byron Mallott.  The Kayhi team took top honors in a national competition held in Frisco, Texas in late April.

As Queen’s “We Are the Champions” played, the eight students that competed in nationals, along with their coaches, entered the stage at the Kayhi Auditorium.  Each was introduced.

“Ladies and gentlemen, boys and girls, children of all ages…please rise to your feet and put your hands together for your 2018…. (applause) …And the coach, the man, the myth, the legend, coach Peter Stanton (applause).”

After a slide presentation chronicling the team’s year, each was interviewed.  Largim Zhuta was asked, with all his talent, how he stays so humble.

“It’s actually quite easy. You let other people tell you how great you are. I have never uttered how great I ever am. Michael Jordan…Do you think he walks around saying how great he is? No. He lets other people do it for him. So it’s really easy in that sense.” (Interviewer: And you see yourself on the same level as Michael Jordan?) “…Your words, not mine. That’s what I was just talking about. See, you’re the one who said it.” (laughter and applause) 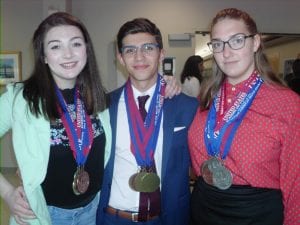 Lydia Sumrall was asked about her pre-game rituals.  She says the group has team cheers, and she has a personal ritual that began in her sophomore year during a competition at Craig High School. Sumrall says she and female team members listened to a Taylor Swift album while running around the locker room making Superman poses.

“So ever since, every time I have to give my speech to my judges, I’ll stand outside my room and Superman pose and I’ll listen to ‘Shake It Off.” Because that song is exactly four minutes long and our speeches have to be three-and-a-half to four-minutes long. So if I can give it in the time of the song, I’ll score well on my speech.”

After the question and answer session, Megan Cornwall was asked to share her speech on procrastination.

“Now, have you ever thought about the fact, in all actuality, it makes you a better problem solver and a strategic thinker? When it comes down to the very last second, I find any way in my power to solve my problem even if it means pulling an all-nighter…or two…or maybe even three. But, let’s be real, what’s a true high school experience without a couple of those?” 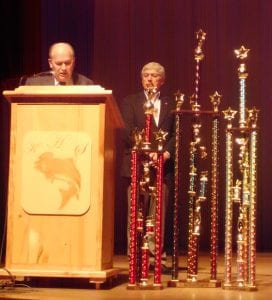 “It is truly an honor to be the principal of a school that values the work and dedication of all our students, and it’s a double honor to see that dedication turned into a national recognition. We are also very proud of your accomplishment. Today we honor you and are all Kayhi proud.”

Marshall then introduced Governor Bill Walker.  Walker and Lt. Governor Byron Mallott shook hands with the decathletes on stage before heading to the podium.  Walker congratulated the students and read a commendation he and Mallott signed.

“Congratulation on ranking first in the Division III of the 2018 United States Academic Decathlon, and for receiving the 2018 Rookie of the Year award. This accomplishment is a testament to your team’s hard work and high standards of academic excellence.” 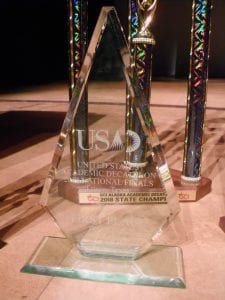 The national award sits before the state awards on the Kayhi stage (KRBD staff photo by Maria Dudzak).

Walker encouraged the students to use the commendation if they felt it would help in their future careers.

Coach Peter Stanton thanked the community for its support and spoke about the importance of learning.

“I hope that all of you can feel proud that a team from Kayhi proved that they can compete and win on a national and even international level. But more than that, I think, the best kind of world that I can imagine is a world where everyone…everyone…is a passionate, life-long learner. So keep that in mind. Stay curious, keep an open mind, and keep learning.”

At the conclusion of the event Marshall asked all AcDc members to join the national team on the stage so the entire team could be recognized. Team members exited up the aisles receiving congratulations and high fives from the crowd.