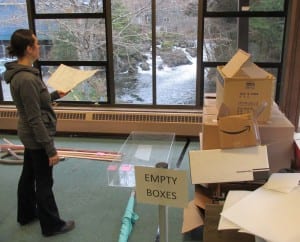 A familiar face will be returning to the City of Ketchikan in a new job. City Manager Karl Amylon announced to the Ketchikan City Council Thursday that former City Museum Director Lacey Simpson has been hired as the new assistant city manager, effective June 11.

“She’s very passionate about Ketchikan. That’s one of the reasons that led to her appointment, as well as her knowledge of the issues facing general government and KPU,” he said. “I’m very much looking forward to her return to Ketchikan and working with her on pursuing the policies and objectives that the council sets.”

Simpson previously worked for the Ketchikan Area Arts and Humanities Council before moving over to the museum department. She was promoted to the director job when longtime Museum Director Michael Naab retired.

Simpson moved south about two years ago. When she returns, she’ll step into a job previously held by David Martin.

Also on Thursday, the council approved a request from the Ketchikan Police Department to hire two officer recruits instead of just one, in anticipation of some upcoming vacancies.

The council also approved an ordinance to designate the city’s marijuana tax proceeds to fund homeless services; and voted to move forward with a protest of a liquor license for a brewery on Water Street. The protest is based on the lack of a building code permit application, and subsequent inspection by the city’s fire marshal.

The brewery is co-owned by Vickie O’Brien. She told the council that the partners are working toward the necessary permits, and hope to have more to report by the time of a public hearing on the protest. That is scheduled for May 17th.  O’Brien is a KRBD board member.