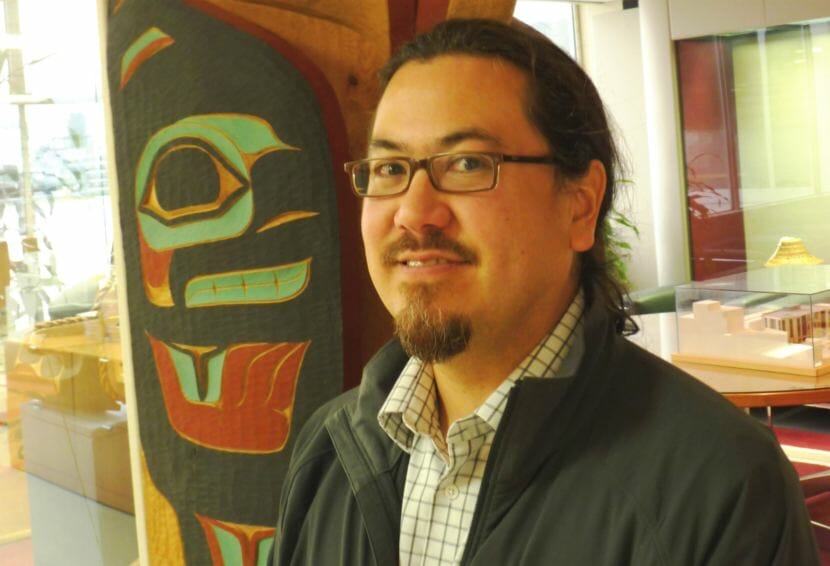 Sealaska Board Chairman Joe Nelson poses at corporate headquarters in Juneau after he was elected to the position in June 2014. Nelson announced a new shareholder burial assistance program on Monday. (Photo by Ed Schoenfeld/CoastAlaska News)

Sealaska is helping its shareholders with burial and cremation costs. The Southeast regional Native corporation’s board voted Monday to offer bereavement benefits of up to $1,000.

Losing a loved one is difficult enough on its own. Add the cost of a funeral, burial or cremation and it can be too much to handle.

A thousand dollars isn’t enough to cover all expenses, which can easily top $10,000. But it can help.

Sealaska Board of Directors Chairman Joe Nelson said the corporation’s increased earnings allow it to offer the benefit.

“This is one that’s been out there for a long time and we haven’t been able to get there. But this year, because of our financial performance and our anticipated continued solid performance, that I think everybody in the company’s just excited that we’re able to move on this one this year,” he said.

Survivors will receive $1,000 when an original shareholder dies. That covers those enrolled in the corporation since it formed in the early 1970s.

Descendants of original shareholders, and those who inherited or were given stock, will receive up to that amount. The corporation said payments will be based on the number of voting shares at the time of the shareholder’s death.

Nelson said the board took action now because it has a new source of revenue.

“It’s a function of being in a healthy financial position and then having the specific carbon project where we want to associate that carbon program to a benefit that all shareholders will feel for generations to come,” he said.

That project allows Sealaska to sell carbon offset credits through a program based in California. It’s complicated, but basically, the corporation keeps some of its forests intact, in exchange for payments from polluters.

Shareholder bereavement benefits began May 7, the day Sealaska’s board of directors approved the new program.

“I think this is fantastic news for shareholders,” said Nicole Hallingstad, a former Sealaska corporate secretary who’s running for the board as an independent candidate.

She’s among other candidates and corporate critics who’ve called for bereavement benefits.

“The most important thing about this announcement is that it just proves that when shareholders are united and are persistent in their voice in raising an issue, that we can actually accomplish the change that we’re asking for,” she said.

Nelson said a recent survey showed the benefit among shareholders’ top priorities. It was outranked by scholarships and dividends.

“Whenever we go out in the communities, just in our regular shareholder engagement, it is a regular theme — that a lot of folks could use help with burial assistance. And it’s also part of our cultural values, especially in Southeast, where we come together and support each other during times when someone passes,” he said.

Some other regional Native corporations already provide a similar benefit.

Nelson said the mechanics of payments are being worked out, but applications will be available sometime in June.