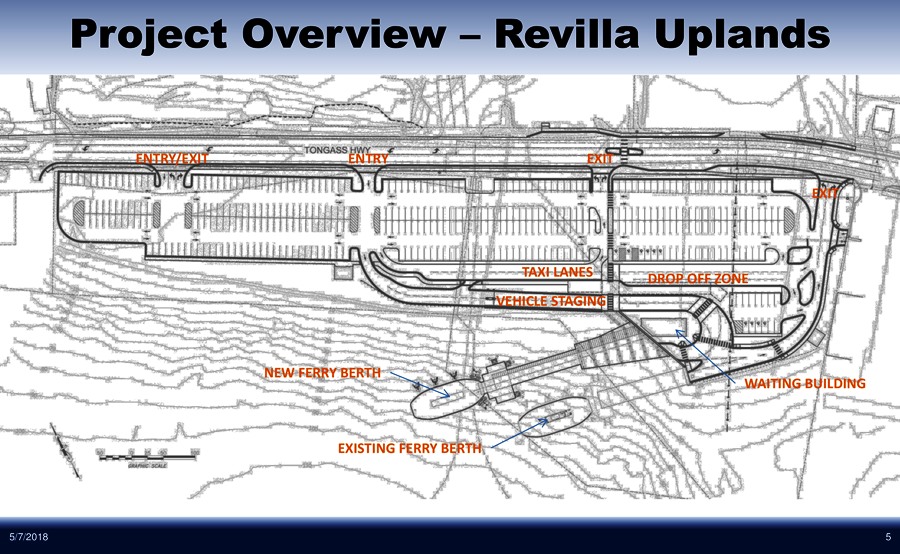 An overview image from the Alaska Department of Transportation’s submitted plan to start work on access improvement to Ketchikan’s airport. (DOT image)

Plans to reconfigure the Revilla-side airport ferry terminal and parking lot will be presented Monday during a special meeting of the Ketchikan Gateway Borough Assembly.

Department of Transportation representatives have submitted a written version of the plan for review. They’ll give a presentation during an assembly work session, allowing time for assembly members to ask questions and provide input.

According to the plan, the first phase will take about six months. That will include highway improvements, a new backup generator, a new ferry berth, temporary parking, relocating a sewage outfall, repairing culverts and relocating the pay-for-parking kiosks.

Phase 2 will take another six months. It will include a new parking lot on the north side, new staging areas, work on a new enclosed passenger waiting area, and a new equipment storage building. The bathrooms will be demolished and temporary facilities installed pending new bathrooms.

Phase 3 will take up to four months. It will include more parking improvements, canopies for the loading zone, completion of the passenger waiting area and new lighting.

Monday’s special meeting starts at 5:30 p.m. in borough assembly chambers at the White Cliff building. Public comment will be heard at the start of the meeting.

Here is a PDF of the submitted plan: Revilla airport terminal project