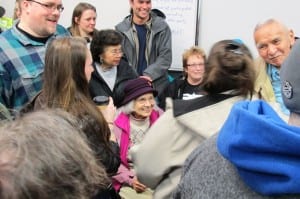 Delores Churchill is seen in this 2016 photo. (KRBD file photo by Leila Kheiry)

Rasmuson Foundation announced this morning that 35 Alaska artists have been awarded grants through the foundation’s Individual Artist Award program.

Ten artists will receive $18,000 fellowships. Among them is Ketchikan artist Mary Ida Henrikson. According to the announcement, she will use the award to create at least 20 new paintings, using the Tongass National Forest as her inspiration.

Another 25 artists will receive project awards of $7,500. One of those awards goes to master weaver Delores Churchill of Ketchikan. According to Rasmuson, she plans to hire a videographer to film her as she demonstrates techniques for more than 22 basketry endings, the method of finishing the top.

Most are known only by Churchill, according to the announcement. The visual instruction will be included on a DVD to accompany Churchill’s book about traditional baskets of Southeast Alaska. Churchill also received Rasmuson Distinguished Artist award in 2006.

Carver Glenn “Stormy” Hamar of Kasaan also will receive a project award. The announcement states that Hamar plans to use the grant for tools and materials to build a large Haida-style canoe. It will be used for paddling journeys. His project will begin with the purchase of a red cedar log.

This is the 15th year that Rasmuson has given individual artist awards to Alaska residents. Here is a complete list of this year’s recipients: 2018 Individual Artist Award Winners List FINAL