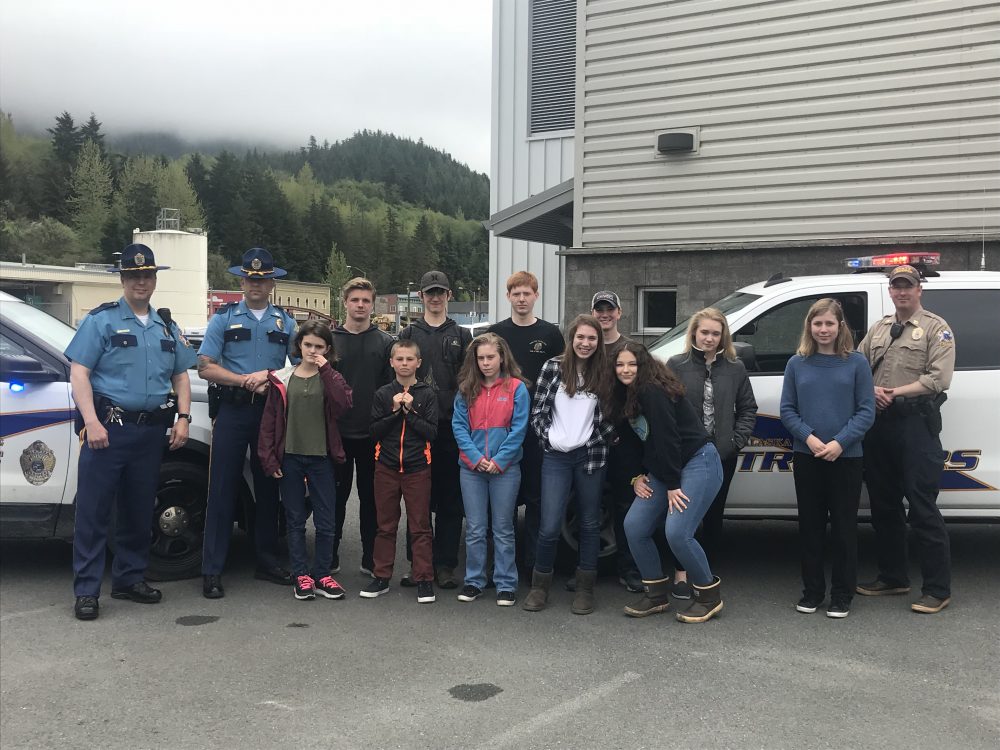 Participants in Ketchikan’s first Alaska State Trooper Student Citizens Academy graduated Saturday.  The seven-week course covered a variety of topics including use of force and safety.

Trooper Lt. John Brown says since late last year, the troopers and other law enforcement organizations have been holding community events and working to get citizens more involved.  Brown says he got the idea for a youth academy after hearing about the Ketchikan Police Department’s academy for adults.

“I took that idea and decided to do something for the kids so that they could learn what police do, why we do what we do, and to be able to engage them in a positive way.”

Brown says 15 students ranging in age from 12 to 17 participated.  A dozen completed the entire program and received certificates and gift bags at graduation. Brown says during the seven-week course, there were guest presenters including the district attorney, wildlife troopers, judicial services staff, and the Village Public Safety Officer, who taught a medical class.

“…first aid, tourniquet application and that type of thing. We spoke a lot about different laws. We went to the gun range and experienced some of our guns and gun safety. We also did a program on officer survival and self-defense. We also did a class on Trooper history – the beginnings of this organization and where we’re at right now.”

Brown says there also were sessions on the effects of drugs, and search and rescue.

Eleventh-grader Jazmine Easterling says she has relatives in law enforcement and took the course to better understand their jobs.

“So it was kind of cool to see what they really do, how they spend their time, and hear their stories about how they’re saved people and all that.”

Trinity Perkins is an 8th-grader. She says she’s had negative interactions with law enforcement in the past, but wanted to learn more.

“I just decided that it might be a little uncomfortable but I want to learn more about that and really learn why. How they acted and (why) they did.”

Perkins says attending the academy changed her perspective and she has a better understanding of how law enforcement works.  She says she appreciated learning about narcotics abuse.

“I think that’s important because it’s a problem all over. It’s just a problem so I think it’s good to know the side effects of it.”

She also enjoyed learning how to dress and bandage wounds.

Tenth-grader Tacoma Coronel says she also has had unpleasant encounters with law enforcement and wanted to see the other side.

“Media has a way of portraying things the wrong way. We see the bad side of things. So I actually learned that cops are very nice people. They’re humans like us. They’re not trying to be mean. Those videos just caught them in the wrong time. And I learned a lot of the stuff they do, a lot of the stuff they use – the guns, the tourniquets. It was really hands-on and I really liked the experience.”

Coronel says she’s involved with a substance abuse task force and enjoyed learning about NARCAN, an emergency treatment for an opioid overdose.

“It was really cool learning about the drug side of things and how we can help people and distribute NARCAN to people. We learned how to do it on someone, so I felt that was really helpful.”

“Our experience with the kids was really good. It was a positive thing. I think they understand a bit more about what we do and why we do things. So hopefully they learned a lot.”

Brown says they plan to hold another youth academy in the future. He says he hopes to expand the program, adding and lengthening classes.