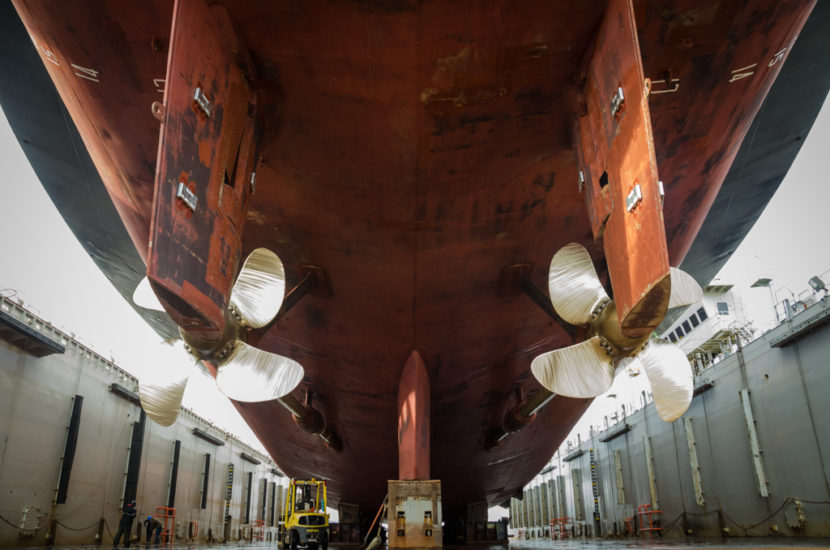 Propellers shine as the Matanuska awaits repairs in 2014. It will get new engines and drive systems this year. That’s one change in the fully funded schedule for the next budget year. (Photo by Heather Bryant/KTOO)

The Alaska Marine Highway System got what it asked for in the Legislature’s operating budget.

Lawmakers OK’d the system’s request in their spending plan for the next fiscal year, which begins July 1.

General Manager Capt. John Falvey said despite a small decrease in funding, the total time in service for ships will actually increase by eight weeks.

“That gives us about 345.9 weeks, a little bit more, technically, than last year because of different ship configurations. Some ships are more expensive or not than others to run. So, it gives us a nice mix for the upcoming year,” he said.

The full ferry operating budget for next year is about $140 million.

The marine highway faced a shutdown in April due to a lack of money. A little-known budget provision – some called it a dirty trick – diverted ferry funding to cover Medicaid program shortfalls.

But Gov. Bill Walker replaced that money in a supplemental budget request, which the Legislature approved.

Next year’s sailings are similar to this year’s.

The ferry Matanuska tied up this month for a full engine-and-drive-system replacement. The work will continue through half or more of the next budget year.

Falvey said its Prince Rupert sailings are being covered by the similar ferry Malaspina.

“Everything else pretty much remains the same. The Kennicott and the Columbia, they’ll also be running. So I’ll say it’s pretty much the same except the Matanuska is out of the picture,” he said.

The Legislature’s capital budget for next year also includes money for ferry overhauls, certifications and terminal and dock work. That’s mostly paid for with federal funds.