Dance groups, artists, canoe paddlers and traditional food experts are gearing up for Celebration 2018. It’s Southeast Alaska’s largest Native cultural gathering, held June 6-9 at Centennial Hall and nearby sites in Alaska’s capital city. It’s been happening every other year since 1982.

It can be hard to fully describe Celebration. You can talk about its expected 2,000 or so dancers and 5,000 participants. Or the language, the oral traditions and the regalia. But that just doesn’t fully capture the experience.

Rosita Worl, president of the Sealaska Heritage Institute, describes one year’s grand exit, when all the groups danced out of the performance hall.

Celebration 2018 lists 45 dance groups from Southeast and other parts of Alaska, the Yukon, British Columbia, the Pacific Northwest and California.

Every Celebration has a lead dance group representing a clan. But this year it has two: The Shangukeidí, or the Thunderbirds, and the Lukaax.ádi, or the Sockeye.

They’re from Haines and Klukwan, or the Chilkat and Chilkoot areas. Worl said they will dance together, with clan songs from each.

The entrance song, owned by the Shangukeidí Clan, is “The Thunderbird Trade Song.” The grand exit will feature “The G̱unanaa Trade Song, one the Lukaax̱.ádi Clan bartered for with inland Athabaskan tribes.

Not all dance groups are made up of members of the same clan. Others are community, school or multi-tribal-based.

Celebration Coordinator Carmaleeda Estrada said she’s enjoyed the growth of the youth groups. She said two younger cousins from Angoon formed their own dance troupe and will be part of their second Celebration this year.

“We would never have thought to start our own dance group. So to be able to see people even younger than me taking that initiative, we have young girls in our group who are still in elementary school and they’re writing songs, they’re writing Tlingit songs. And so, just to see that from my own community is really inspirational. It really raises the bar,” she said. 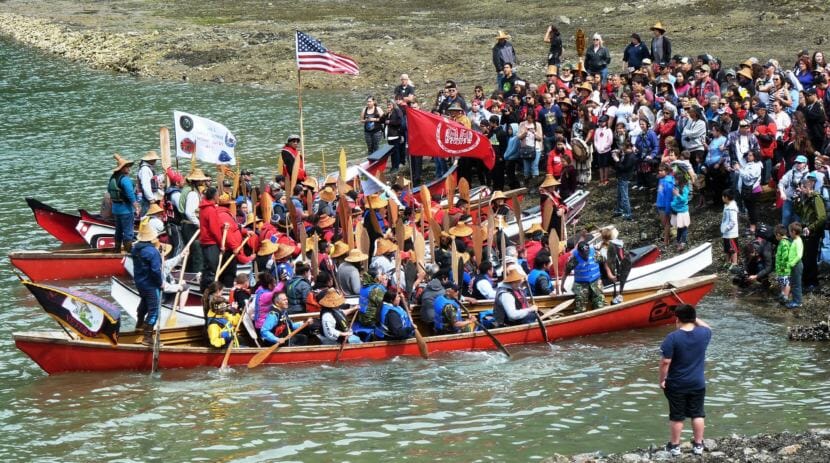 Canoes from around Southeast Alaska are formally greeted at the Douglas Boat Harbor on June 8, 2016, just before that year’s Celebration. This year’s canoes are scheduled to arrive June 5 between 2 and 3:30 p.m. They’re organized by the One People Canoe Society. (Photo by Ed Schoenfeld/CoastAlaska News)

Regalia, from clan hats to vests to button blankets, is worn by most dancers. But Worl said that’s changing.

“Before we would only allow traditional regalia. But we kept saying, if our culture’s going to evolve, then we have to let it and support that. So now you’re seeing a lot more Native fashion wear,” she said.

This year’s Celebration will continue the relatively new tradition of a runway-style fashion show. For the first time, the models will have a formal model training session.

Another new event is a seal oil contest, to be judged by taste and other factors.

Estrada said such contests will be more visible than in previous years.

“We would do that off to the side in the elders’ room and it wasn’t as prominent as it’s going to be this year. So not only are we adding the seal oil competition to that, so now there’s three food categories, but we’re also moving that to the main stage,” she said.

But the action isn’t all on stage. Estrada thinks back to Celebrations she attending as a child.

“You remember running around with your cousins and you don’t really realize how important and how lucky you are and what a profound event you’re at. But those things are just as fun, being able to reconnect with family and friends from all over,” she said.