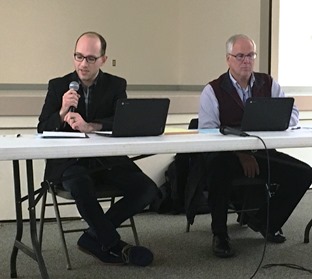 Until late last week, it appeared that House District 36 Rep. Dan Ortiz of Ketchikan would be unopposed in his bid for re-election. But, two last-minute candidates filed right before the deadline Friday to appear on the Aug. 21 primary election ballot.

Trevor Shaw is the Republican candidate and Ghert Abbott is the Democrat. Both are unopposed in their respective primaries, so will face Ortiz, an independent, in the Nov. 6 general election.

Trevor Shaw said he decided to run because nobody else would.

“I had been hoping for quite a while that someone else was going to run,” he said. “It’s too important to kind of let it go, to kind of leave things as they are.”

Shaw is president of the Ketchikan School Board, and said he enjoys keeping his political involvement as local as possible. But, he said he also wants to make sure the public has a choice.

“For me, the decision-making process was, ‘OK, is the status quo working for our community?’ And I don’t believe it is,” he said.

Shaw opposes any broad-based tax until the state fixes what he said is a disparity in Alaska’s current tax system.

“I don’t think there should be new taxes until everyone is paying their fair share,” he said. “Alaska is the only state where the entire state isn’t incorporated into cities and boroughs. I think that’s something that needs to be addressed.”

Shaw was referring to the required local contribution for public schools that municipalities must pay, based on property tax values. Unincorporated communities are exempt from that requirement.

“If that was made statewide on an equitable basis, that would result in approximately another $200 million in new revenue for the State of Alaska,” he said.

He also said the state could find ways to reduce spending before considering taxes, such as private-public partnerships and spending cuts.

In the past two House District 36 elections, outside groups supporting the Republican candidate sent out negative campaign flyers and advertisements targeting Rep. Ortiz.

Shaw said he can’t control what an outside group does, but he plans to run a positive campaign based on issues.

“I’m going to make that case very strongly, very publicly, and hoping that outside interference is hopefully to support my candidacy and promote my ideas, and not anything negative,” he said.

Shaw is the District 36 Republican Party chairman. He works as the administrative manager and director of government affairs for Ward Cove Group, a business at the site of the former Ketchikan Pulp Co. at Ward Cove.

Democratic candidate Ghert Abbott wasn’t available for an interview at deadline Monday. We’ll air a later report about his candidacy.