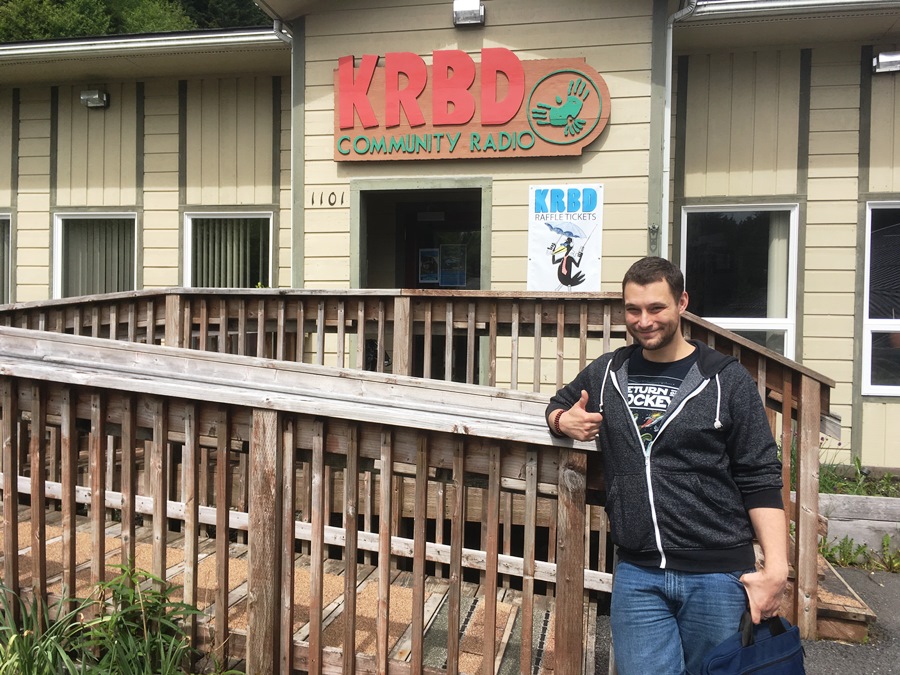 Christopher Cumings of Ketchikan is running as an independent candidate for U.S. House in the Alaska Democratic primary election. (KRBD photo by Leila Kheiry)

Christopher Cumings said he also hopes to raise awareness about opioid addiction and treatment, using his own experience as a recovering addict.

“Politics has always been my passion. When I was 5 years old, I was ready to be president. I thought, you know, why not? Why not try this,” said Christopher Cumings.

He’s lived all over Alaska, from the North Slope to Prince of Wales Island. He has a bachelor’s in political science and attended law school. Cumings wasn’t able to complete law school, though, because of his struggles with addiction.

Cumings has worked for Wells Fargo, but again addiction got in the way. He’s not working now. He’s instead focused on his ongoing recovery, and his campaign for Congress.

A big focus of that campaign is the current high rate of addiction. He said there aren’t enough resources available to addicts, especially post-rehab support.

“I’ve been to rehab three times, and every single time I was ready to sober up. I felt prepared, but then life hit,” he said. “I wasn’t prepared to find work, to settle into that normal life. Us addicts, we don’t live normal lives. Trying to put on a normal hat is a challenge. But I think there’s hope.”

“I’ve seen statistics that at least 50 percent of addicts have some kind of co-morbid mental illness. I kind of think that’s under-reported,” he said. “It’s probably closer to 70-80 percent at least. It’s a struggle to try to get off drugs, but then to have this mental health issue that hasn’t been addressed – that’s another gap that people fall through.”

Cumings said he’s experienced depression and anxiety, but was able to get help for both, along with his addiction treatment. He’s currently taking Suboxone to curb opioid cravings.

Cumings added in a later email that treatment needs to focus on an individual’s needs, because not every treatment will work for every person. He also supports repealing the federal controlled substance act, so those substances could be regulated instead through the Food and Drug Administration.

Cumings said he’s different from the usual candidate. He said politicians often focus on the economy and jobs. Those are important, but

“I’d like to approach this differently as the quality of life candidate. I believe if you give people a reason to be here, keep them happy, people will want to stay. The economic piece will take care of itself,” he said. “If we have enough teachers, if we have enough health care professionals – those are jobs. Quality of life is an economic issue.”

Cumings also supports universal health insurance. He cited his own experience when he was uninsured.

“Can I afford to go to the doctor, or can I just suck it up and not miss work and get through it?” he said. “The other experience I had with this is the birth of our son. At that time, we had private health insurance but the copays, we may have just now paid them off. I don’t know yet.”

Cumings said he supports natural resource development, but it has to be balanced with protecting other resources. Oil development in the Arctic National Wildlife Refuge, for example, is a complicated issue.

“I know it’s a special place. I’ve lived up on the North Slope, I know what it looks like. There’s nowhere else in America like that,” he said. “But at the same time, right now, we need gas and natural resources not just to get around, but to fund our state.”

Careful exploration to start would be OK, Cumings said. Full development would have to be a bigger conversation.

Cumings does support exempting the Tongass National Forest from the federal Roadless Rule. He said resource development on the Tongass is best made by regional managers.

Cumings said Rep. Don Young has done great things for Alaska, but it’s time for a change. At 33, Cumings said he represents the up-and-coming Millennial generation.

He understands his odds of winning are small, but he’ll take those odds.

“I’m kind of looking at this like a valuable learning lesson. This is my first interview, so I’ve got one thing checked off the list,” he said. “Politics for me, I guess maybe I’m weird, it’s fun for me. Win or lose, I know I’m going to have fun. The outcome is secondary to the journey.”

Cumings has a Facebook page: Cumings4Congress, and he’s working on a campaign website. His early plans are to focus on a digital presence, but he hopes to be able to fund a trip north to reach other voters in Alaska.

Also running in the state Democratic primary for U.S. House are Alyse Galvin, Carol Hafner and Dimitri Shein. The primary election is Aug. 21.