Drought in a rainforest? Yes 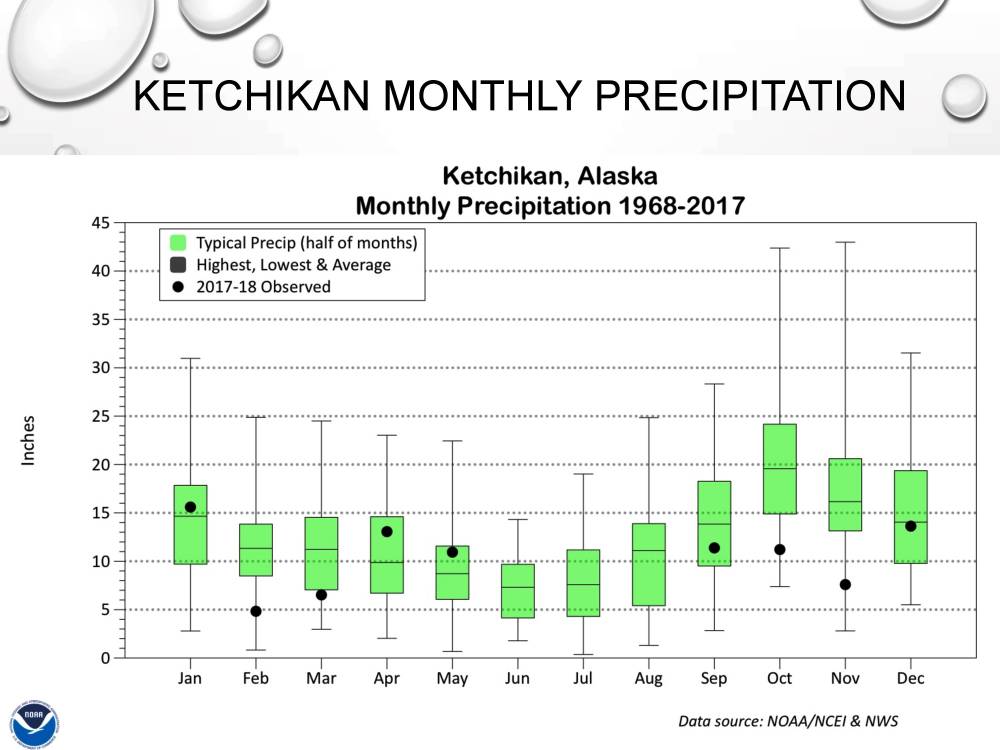 The green rectangles show average Ketchikan precipitation for that month over the years. The black dots show what happened over the past nine months. (NWS graph)

There are no tumbleweeds blowing through the streets of Southeast Alaska towns, but, the region has received quite a bit less precipitation than usual over the past nine months.

The National Weather Service presented a webinar this week about Southeast Alaska’s drought.

Southeast Alaska is the kind of place where you can get a lot of rain but still be in the middle of a drought. It’s home to the Tongass National Forest, the largest of about a half-dozen temperate rainforests in the world. 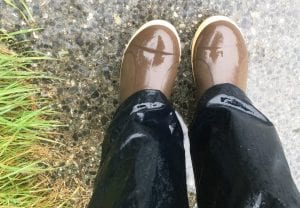 Communities scattered through the lush evergreen forest measure rainfall in feet. Ketchikan is one of the wettest, with about 12 feet of annual average precipitation.

Rick Thoman is a climate scientist with the National Weather Service.

“Drought is one of those things that, it seems like, oh, everybody knows what a drought is. But the more you think about it, the harder it gets to pin down,” he said.

A drought is a deficiency of precipitation over an extended period of time. The deficiency level and the time period can vary, Thoman said. And, whether or not it becomes a “drought” also depends on how much demand there is on water resources – by people and the environment.

Considering all those variables, Southeast Alaska is in the middle of a drought. It started last fall, following a wetter-than-normal summer. Ketchikan, for example, received record rainfall levels in August.

But then, Thoman said, “starting in September, we see that precipitation in Ketchikan totaled a little over 11 inches. That doesn’t sound like a drought to me, being a Fairbanksan. Sounds like an awful lot of precipitation. But by Ketchikan standards, that was actually below normal.”

Normal in September is closer to 15-16 inches.

And then: “October, again, over 11 inches of rain, but that’s well below normal in Ketchikan in October, followed by well-below normal precipitation in November, as well,” Thoman said.

October usually sees 15-25 inches of rain; a typical November is slightly under that, but similar. November last year, though, was around 8 inches.

December and January went back to average levels, Thoman said, but then February and March were dry — again by rainforest standards.

All that means overall precipitation in Southeast Alaska since fall has been below normal. By a lot.

October to March also was the driest for its time frame.  Rainfall in April and May improved the situation somewhat, but a deficiency remains. 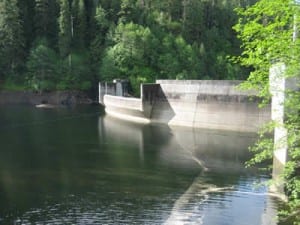 Aaron Jacobs is a senior hydrologist with the weather service’s Juneau office. He said that deficiency has had an effect on the region. Hydroelectric power generation, for example, was hit hard.

“The main reason for this type of an impact is the lack of precipitation in the wet season,” he said. “If Southeast Alaska doesn’t get that rain in that October, November and into December time frame, there could be deficits in water levels that may not be able to recover.”

And when hydroelectric dams don’t have enough water, communities need to use more-expensive diesel power.

What will happen next? Thoman said there isn’t a clear signal at this time.

“We do have increasing signs of an el-Niño developing for this fall and winter, and that often has a significant precipitation signal in Southeast Alaska,” he said. “So, at this point I would say as we move towards the wet season for Southeast, stay tuned.”

And, as rainforest residents know, keep your rain gear handy.