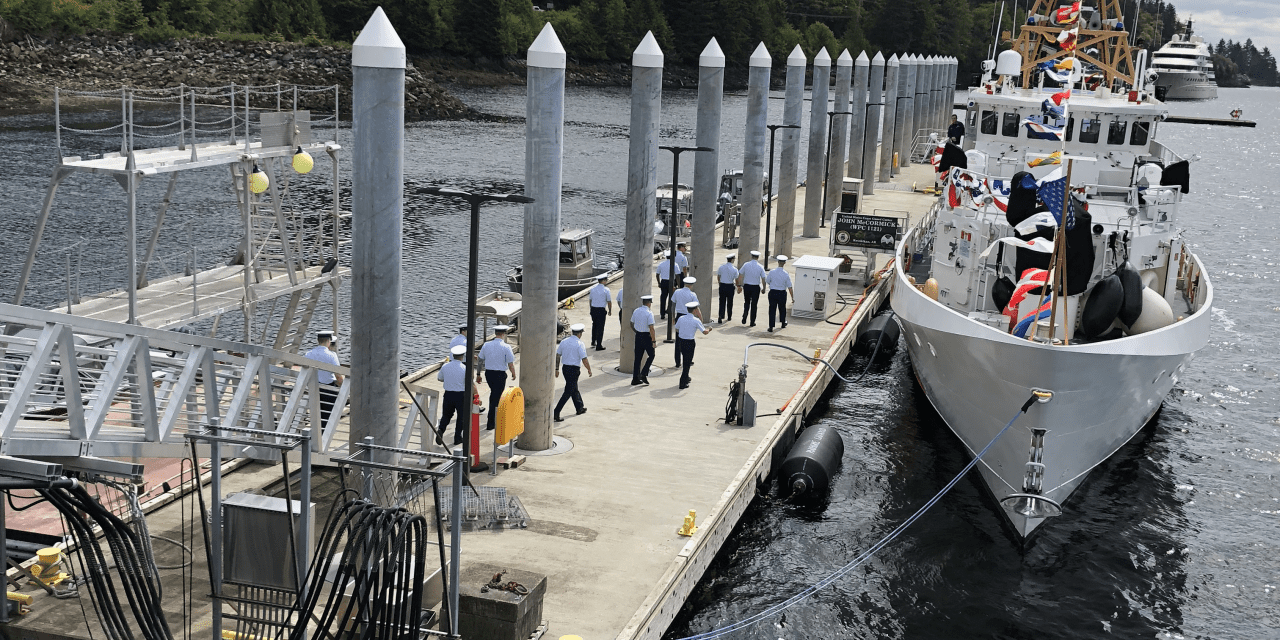 Saying goodbye to someone you care about is tough, especially once you’ve gotten to know someone well. But for a coast guard crew, saying goodbye to their captain is an ancient tradition.

“It’s interesting because a change of command ceremony is not necessarily per regulations you have to do it, but it’s actually a really ancient nautical tradition,” United States Coast Guard Cutter Operations Officer Hailey Thompson, said. “Skippers of these vessels need to be seen to see who’s in charge of the vessel. It is sort of a beautiful thing to witness.”

Thompson is a part of the crew who is sending off Lieutenant Michael Moyseowicz, their captain, after he led them for two years patrolling the waters of Southeast Alaska.

It will be tough for the crew to say goodbye because Moyseowicz helped launch the ship and guide it over 6000 nautical miles from Louisiana to Alaska two years ago.

“This crew, this captain, he was the originator of this ship. So, for us, having done 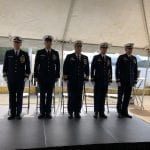 Coast Guard Lieutenants and Captains stand at attention up on the stage. (KRBD Photo – Liam Niemeyer)

everything from bringing this ship to life from starting operations in Ketchikan, saying goodbye to him is a challenge. But it’s exciting,” Thompson said.

This ceremony is called a change of command because not only is an old captain leaving, but the crew is welcoming a new one. Inside the station, the new captain, Lieutenant Tim Ozimek, is holding a lint roller. 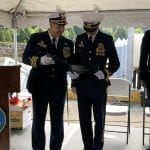 “The lint stands out on these dark blue uniforms pretty well, so you want to make sure you get it all,” Ozimek, said.

Ozimek is coming from Washington D.C., and he actually knows Moyseowicz well. They were in the same platoon together back at the Coast Guard Academy, and Ozimek actually attended Moyseowicz’s wedding.

But their history together goes even farther back.

“We went to high school in Europe together because our parents were both Navy. Not the same high school, but lots of overlapping friends,” Ozimek said. “It definitely helps having that connection and knowing each other. I never would have thought 13 or 14 years ago that here we would be here in Alaska meeting for a change of command.”

Standing in the opposite corner from Ozimek is Moyseowicz. It’s not the accomplishments he’s going to remember from his time in Ketchikan, Moyseowicz said. His crew won the 2017 Hopley Yeaton Cutter Excellence Award for being the best small ship in all the Coast Guard. 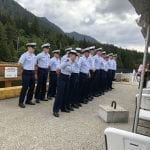 Instead, he’s going to remember the people — his crew.

“Gonna miss all the personalities, that made my tour that much more fun,” Moyseowicz said. “Having a group that always made it fun coming to work that made the hard times good, and the fun times even more fun.”

Moyseowicz will eventually be heading to China to become a linguist for the Coast Guard.