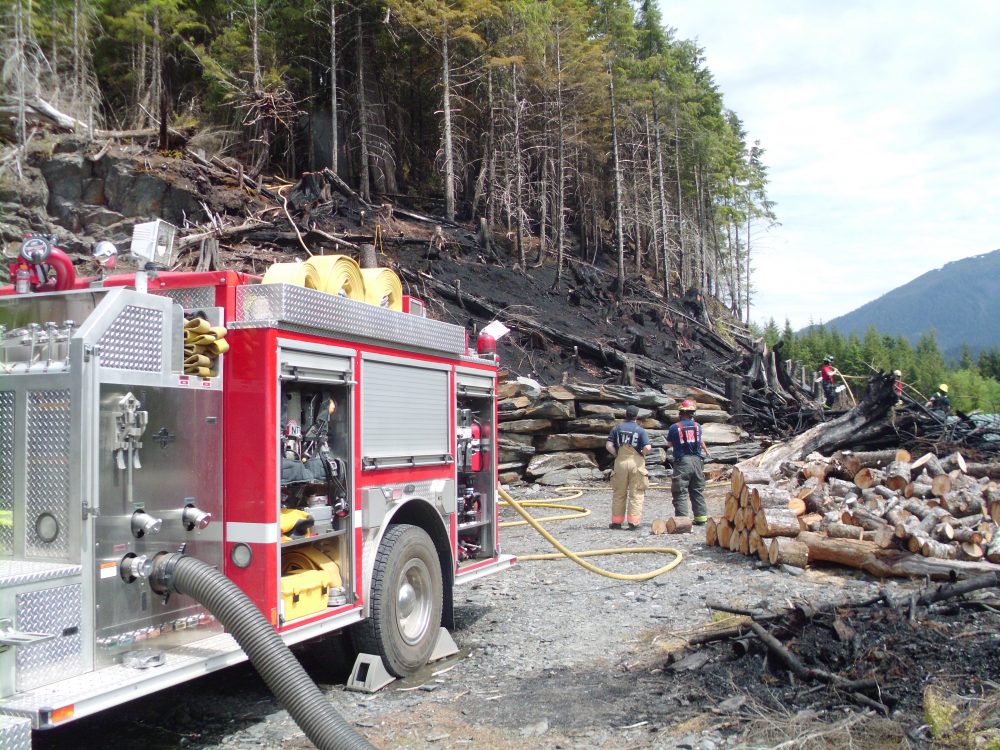 Fire crews in Ketchikan check for embers after a wildfire is put out June 20th (KRBD staff photo by Maria Dudzak).

No one was injured and damage was minimal when a wildfire broke out along a hillside behind the Alaska State Troopers post in Ketchikan Wednesday morning.

As a Temsco helicopter crew air-lifted water from Ward Lake to the burnt hillside, fire crews hosed down hot spots and surveyed the area.  Crews from the North Tongass and South Tongass Volunteer Fire Departments, and the City of Ketchikan Fire Department responded to a call received a little before 11 a.m. Wednesday. 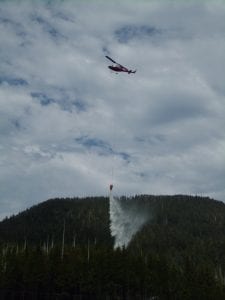 A Temsco helicopter makes a water drop over a small wildfire in Ketchikan (KRBD staff photo by Maria Dudzak).

North Tongass Fire Chief and incident commander Jerry Kiffer estimates the fire burned fewer than two acres. He says the fire started at the bottom of the hillside adjacent to a flat area covered with gravel.

“It travelled uphill and then it traveled horizontally down the hill. And then there are some spot fires which Temsco is working on now that were taking place just on the top of the ridge and down the other side.”

He says the area involved in the fire suppression operation is much larger than the area damaged.

“It gets a lot of water out in front of the fire on what we call a ‘wet edge.’ So that any embers, even as we’re mopping up and we’re creating embers and taking care of little spot fires, that we don’t get any extension past that. We don’t want this fire running down into places where we can’t get.” 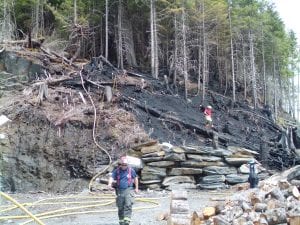 Fewer than two acres were damaged by a wildfire in Ketchikan on June 20th.

Kiffer says wildfires often travel underground along tree roots and can reignite several hundred feet away from the initial blaze.  He says crews have specialized nozzles to drive water into the ground.

“And we’ll be digging down anything that’s smoldering at all.”

Though the cause of the fire is still under investigation, Kiffer says there was a controlled burn in the area and sparks from that fire might have caused the blaze. He recommends people use extreme caution and common sense when burning, especially in dry weather.