Every year, the month of June is known as “Pride” month in the Lesbian, Gay, Bisexual, Transgender and Questioning community.

LGBTQ people use this month to celebrate their unique identities. These celebrations which include parades and festivals across the country. LGBTQ people in Ketchikan celebrated at Rotary Beach, also known as Bugge’s Beach, about a 10-mile drive outside of Ketchikan city limits.

For people making rainbow-colored arts and crafts in one of the public shelters, it’s a safe space.

Zeriah Watson-Milne paints a purple, pink and blue flag to represent her bisexual identity, and she’s getting paint and glitter everywhere.

Dawn Schlosser organized this year’s Ketchikan Pride so that LGBTQ people could be be themselves and have fun.

“It’s great to feel involved and included, just seen. It can be sort of hard when it’s not something you talk about everything, and it’s something some 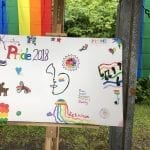 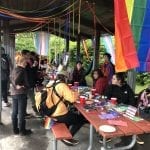 She says a relaxing event like this allows LGBTQ people to feel more comfortable in a state like Alaska that sometimes is less open to them.

“Overall, I feel like we’re a lot more closeted and hidden because it’s a conservative space. I know it affects some of us more than others, but sometimes it’s family culture that keeps of closeted or hidden from ourselves,”

Schlosser has lived in Alaska for 14 years. She came out as a lesbian just a few years ago. And there are other people here who, like Schlosser, are starting to discover their sexuality or gender identity.

Frances Bearry had been an ally of LGBTQ people for much of the 15 years she’s lived here. But she only recently started identifying as “queer.”

“Now that I’ve decided to label myself, I’ve fully realized that part of myself, something that I didn’t last year. So I think that’s a good change,” Bearry said.

The label “queer” is a term that to her means Bearry is still figuring out her sexuality. And events like this allow her to feel normal about that. 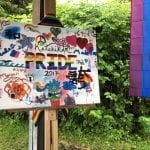 environment for them to just be who they are, to know they’re supported at an event like this.”

In the corner of the shelter is a canvas where Kaitlyn Compton is painting a flag.

“I’m agender, so I’m adding a heart and the black, gray and green colors of our flag,” Compton said.

Agender means Compton doesn’t identity as male, female or any specific gender. Compton hopes that more awareness of events like this will lead to more acceptance from the Ketchikan community.

“Just that more people will feel as safe and secure to be able to come out. Because, I feel like there could have been way more of a turnout where people knew they could have a place like thi,s where they could feel welcome and safe and cared for.”

The group plans to host an LGBTQ-focused event with the Ketchikan Area Arts and Humanities Council in September.