Ketchikan City Council members were surprised during a special meeting Tuesday to learn they had approved a port-expansion plan back in February that called for allowing mega cruise ships at either Berth 1 or Berth 2.

In addition to that news, there also was a significant cost increase for the overall port plan. As a result, the project is on hold.

Renovating Ketchikan’s downtown port has been on a fast-track, so the city can continue docking cruise ships, including post-Panamax ships, which are larger than ships that have been coming to Alaska. 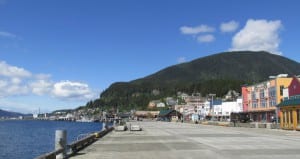 Berths 1 and 2 are seen on a nice pre-cruise-season day in Ketchikan. (KRBD file photo by Leila Kheiry)

But that project now is suspended, after the cost estimate skyrocketed from about $40 million to nearly $100 million. Even if design-engineering can bring that down, Shaun McFarlane of design firm Moffatt & Nichol told the Council the cost likely won’t go below $60 million.

He said part of the cost increase is due to longer concrete floats, requested by the cruise lines, and more pilings than originally estimated. But, he said, they’ve already made some design changes to reduce costs, because they received updated mooring-load numbers.

“What that is showing us is that we can drop the number of pilings completely. We’ve got 92 currently in the project. We feel we can get that into the low 80s,” he said. “And perhaps drop the diameter from 60 inches to at least 54, but perhaps as low as 48-inch piling. Which further reduces the piling (costs). That’s a consequence of having more time to really look at the design.”

McFarlane said designers had to speed up the design process because of a later-than-expected design-concept decision from the city, and the pressure to have enough work done so that city voters could decide in October whether to fund the project through a bond proposition.

The bonds would be paid for through cruise ship port fees, similar to previous cruise-dock improvements. 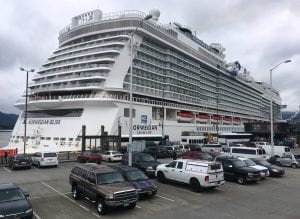 The Norwegian Bliss is the only mega cruise ship set to visit this season. It fits at the current downtown Berth 3, but a larger berth would allow more gangways for passengers to disembark more efficiently. (KRBD file photo by Leila Kheiry)

Because of the increased cost estimate, though, City Manager Karl Amylon recommended that the council suspend design work on the project and cancel the October bond proposition. He said the city needs more information, and new sources of funding if the project cost remains elevated.

“I think it’s incumbent upon us to take the time to get this right and not have to go back to the community later on to correct something,” he said. “We need to be able to show that we have a comprehensive plan and get community buy-in. I think this is the best way to achieve that.”

The council agreed, and voted unanimously to suspend design work and the ballot proposition. Council members also asked for clarity about the design, which they say doesn’t fall in line with direction they thought they provided earlier this year.

Here’s Council Member Dave Kiffer: “I guess I’m really surprised to see the proposal calls for two big docks at (Berths) 1 and 2. We were pretty clear through a variety of discussions that that was not the direction council wanted to go.”

Council Member Janalee Gage added: “No offense, but I feel like we just got railroaded into a completely different design than what we voted on.”

Other council members agreed that they had voted for a plan that allows a mega ship at Berth 1 and a normal-size ship at Berth 2. 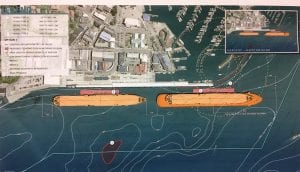 This is one option provided during a mid-February port expansion planning meeting. It shows a mega cruise ship at Ketchikan’s Berth 1 dock, and a regular-size ship at Berth 2. (KRBD file photo by Leila Kheiry)

McFarlane said the direction he heard was that the council didn’t want two mega ships to be able to dock at the same time, and this design reflects that. He said Berth 2 would be able to take a bigger ship only if there isn’t a mega ship at Berth 1.

“The decision was made to provide the flexibility so that on a three-ship day, or perhaps when you had a much smaller ship, you could move that much larger … ship onto berth 2 and get it closer to downtown,” he said.

McFarlane said that decision was made during discussions with city officials and cruise industry representatives. It would be less expensive, he said, if the council chooses to change that back to what the council thought it had already decided – which would not allow for a mega ship at Berth 2 at all.

McFarlane said he could come back with cost comparisons.

While delaying the port expansion project, the council did move forward with some related work. Members unanimously approved spending about $70,000 to study currents in Thomas Basin, in order to determine how the port expansion might affect those.

Another approved motion authorizes about $165,000 for continued planning to remove a rocky pinnacle off Berth 2 that can be a navigation hazard for large ships.

Both of those items will be funded through the city’s port department.