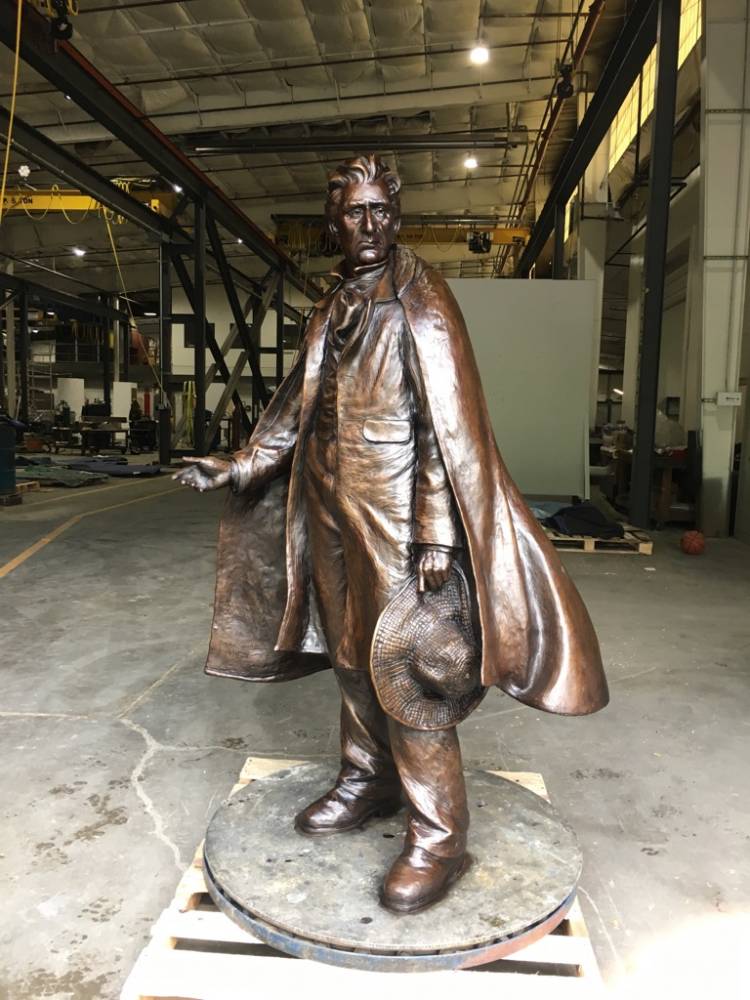 The Nebraska version of the William Seward statue, a near replica of the statue in Juneau. (Provided – Jessica Kolterman)

Dave Rubin’s artwork can be found in many places around Ketchikan. One of his paintings is hanging up in a local jazz club. His sculpture “The Rock” in downtown Ketchikan depicts pioneers who helped found the city.

And last year, he and his sister created a statue of William Seward for the city of Juneau. That statue traveled across the country before reaching Juneau, stopping in many places including the city of Seward, Nebraska.

“They were really excited and said ‘we want one of our own.’ And I said ‘the Foundry holds the molds for a year. And that’s like half the cost of having a statue cast in bronze. And it would be really good to jump on it while you can.’ And they did,” Rubin said.

A makeshift committee of Nebraska politicians, city officials and citizens got together to get their own version of a Seward statue for their county courthouse.

After a year of fundraising and planning, Rubin went back to the foundry in upstate New to craft a Nebraska version of William Seward.

Seward was President Abraham Lincoln’s Secretary of State. He was a strong abolitionist and also survived an assassination attempt. But what he probably is most known for is “Seward’s Folly,” purchasing territory from Russia that would eventually become the state of Alaska.

The Juneau version of Seward is holding the treaty of Alaska’s purchase in his right hand. The Nebraska version of him is different.

Rubin and his sister, Judith, are going down to Seward, Nebraska, for the statue unveiling.

The city is careful not to be confused with Seward, Alaska. There’s a sign downtown that says Seward, Alaska, is over 4000 miles away.

“Right next to the Seward, Alaska, sign is our historical marker designating us as the Fourth of July city. This is actually our 150th Fourth of July celebration,” Seward Mayor Josh Eickmeier said.

The city is about the size of Ketchikan. But they draw in more than 40,000 people every year for the massive celebration.

Jessica Kolterman has been on the city’s Fourth of July committee since she was twelve years old. Now an adult, she helps organize many events that day, including a pole vault competition.

The Seward statue wouldn’t have been possible without her family’s donation. Last November, Kolterman’s mother, a long-time Seward resident, passed away after battling pancreatic cancer. Her family decided to make a donation for the statue in her memory.

“She would probably be embarrassed that someone would do something like that in her memory, but it’s also something that is supposed to be given back to the community. I’m just lucky that when I drive by it, I’ll be thinking about my Mom,” Kolterman said.

Kolterman hopes the statue will provide a historical reminder for community members about the significance of William Seward’s life. The city was 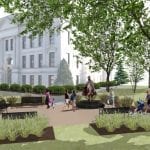 A rendition of what the near replica Seward statue will look like in Nebraska. (Provided – Jessica Kolterman)

named after him because he was secretary of state at the time of the city’s founding. Seward founders wanted to recognize the politician’s accomplishments.

Local officials, like Seward County Chamber President Jonathan Jank, are grateful for Rubin’s work because of the historical significance.

“You know, he inspired an entire community, an entire county to dream. And this statue will live beyond us. I’m very grateful that he’s allowed us to be a part of that and just his willingness to really be a part of Alaska’s vision.”

The statue will serve as a parade float during the Fourth of July with Dave and Judith standing next to it.