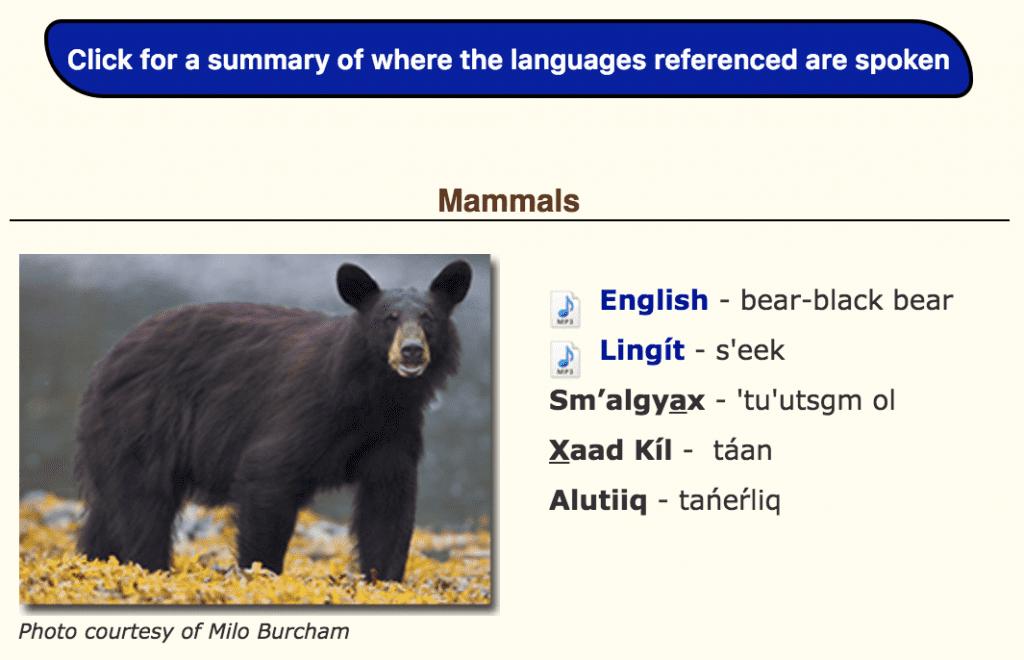 A screenshot of one of the audio recordings offered on the webpage. (KRBD Photo – Liam Niemeyer)

The U.S. Forest Service launched a webpage Friday featuring audio recordings and pronunciations of various wildlife such as “beaver” or “fish” in different Alaska Native languages.

For example, the pronunciation for “black bear” is “s’eek” in the Tlingit language.

These pronunciations are just some of the audio recordings the U.S. Forest Service has published on a webpage detailing how to say common names for wildlife in the languages of the Haida, Tlingit and Tsimshian peoples.

Melinda Hernandez-Burke is the Regional Tribal Program Manager for the agency. She says publishing a page like this is part of the Forest Service’s effort to help encourage awareness of regional Native languages.

“We just see ourselves as a neighbor of these other entities here. And we really just want to make sure we’re putting in the effort to help with the resurgence of these languages here that’s so important to the ties of these native communities to their lands, their waters and for being good neighbors,” Hernandez-Burke, said.

Hernandez-Burke says this webpage is only a start. The agency collaborated with Sealaska Heritage Institute in Juneau to provide the pronunciation guide.

Right now, there are audio recordings of only Tlingit pronunciations with typed-out pronounces for the Haida and Tsimshian languages. Hernandez-Burke says they want to expand on those recordings by collaborating with more Native organizations.

One of those is the Haayk Foundation in Metlakatla, dedicated to preserving the Tsimshian language. Initiatives like the webpage are key to helping save different interpretations to words that other languages bring.

“Words are like a key that can open up not just one concept but often multiple concepts that are stacked together to get a three-dimensional understanding of different concepts. So, it’s so important to have these ancient words connected to these ancient places,” Haayk Foundation Chair Gavin Hudson said.

Hudson wants to collaborate with the U.S. Forest Service on this project in the future to add more words and audio recordings.

Haayk Foundation Co-Chair David Boxley says the fact Sealaska Heritage Institute, a partner organization to the foundation, helped start the webpage shows how Native communities can work together to preserve their languages.

“We’re all in the same canoe. And we all need to work together toward this common goal we have. We need to be there for each other, and SHI has done a fantastic job of showing that unity and shared purpose. We appreciate it,” Boxley said.

Boxley says he hopes to contribute  Tsimshian audio recordings to the webpage in a few weeks when he is visiting SHI.