Sourdough Tours started feeding eagles at its West End property this summer, to attract the birds for its tours. That prompted complaints from nearby residents, and led the city to look into whether current regulations cover that activity.

Business owner Rick Thomas told the council he was told to stop feeding eagles, and that he could be fined under litter laws.

He said he did a lot of research before offering the new attraction. 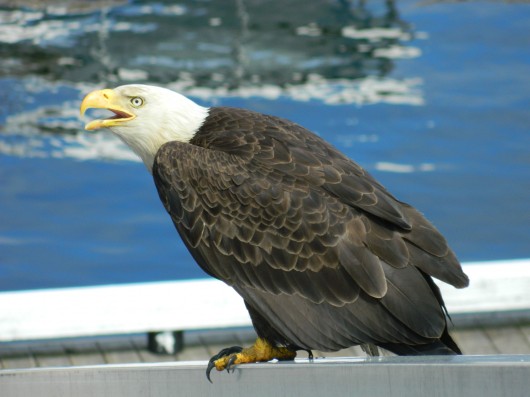 “I checked local, state and federal laws, talked to a lot of different people about that, found out it was not illegal to feed the eagles after 2007, my understanding is, once they went off the endangered species list you could feed them,” he said.

Thomas said if the city decides to enact a law to prohibit eagle baiting, it needs to be carefully worded. Otherwise, seafood processors and others could be affected.

Many other local tour guides also spoke to the council in support of Thomas.

On the other side of the issue was Clyde Pasterski, one of the nearby residents. He said the tour company has created a mess.

And, Pasterski said, other tour operators now are bringing visitors close to the site to take advantage of Sourdough Tours’ success with attracting eagles.

Burk said a similar attraction in Sitka resulted in a couple of tourists attacked by eagles as the people got out of a tour vehicle, because the birds were anticipating food.

She said if the council wants to allow this activity, the city can find a way to offer it safely.

“If we can designate a safe area that’s a little bit south, or a little bit north, out of town. An area that’s against the water where food that’s being thrown can land safe in the water, we’re out of the way of airplanes and power lines and vehicles,” she said. “And maybe even building a covered shelter, where people can stand under cover. An eagle is not going to come underneath something to harm someone.”

During council discussion, City Manager Karl Amylon told the council that the city’s laws don’t clearly prohibit the activity. The city can continue to enforce based on its current litter law, but that only applies if the herring are thrown beyond the tour company’s private property and onto the city’s tidelands.

Also: “I can’t tell you whether or not those will be sustained if we do citations, how a judge is going to rule on that. It will be unchartered in these circumstances,” Amylon said.

City Mayor Lew Williams III said he understands the tour operators desire to continue business, but he also understands the nearby residents’ concerns. Williams said he experienced significant roof damage from increased raven activity after the sports field across from his house put in a concession stand.

The council gave direction to enforce the litter law as appropriate, although Council Members Julie Isom and Bob Sivertsen did not agree with that action. The council also agreed to discuss the issue further at its next regular meeting.

Also during public comment Thursday, Jessica Miles asked the council to take action to stop cruise ships from dumping wastewater. She said the ships are turning the community’s port into a cesspool.

“I love the beach, I love the water. What we don’t like is swimming in a seriously contaminated ocean,” she said. “I harvest kelp, sea asparagus and beach greens, and my family loves to fish.”

Responding to questions from the council, Amylon said cruise ships operate under state and federal permits, and must treat their wastewater to a certain standard before discharging.

“Simply stated, we don’t have enforcement powers on this unless you want to look at adopting local regulations that would try to regulate it,” he said. “I’m not sure that’s something you want to do lightly. That’s going to take a lot of thought and consideration.”

The council asked city officials to bring back more information about what ships are allowed to discharge while in port.

Also Thursday, the council agreed to move forward with a proposal to transfer operations and maintenance of Swan Lake Hydroelectric Facility from Ketchikan Public Utilities to the Southeast Alaska Power Agency.