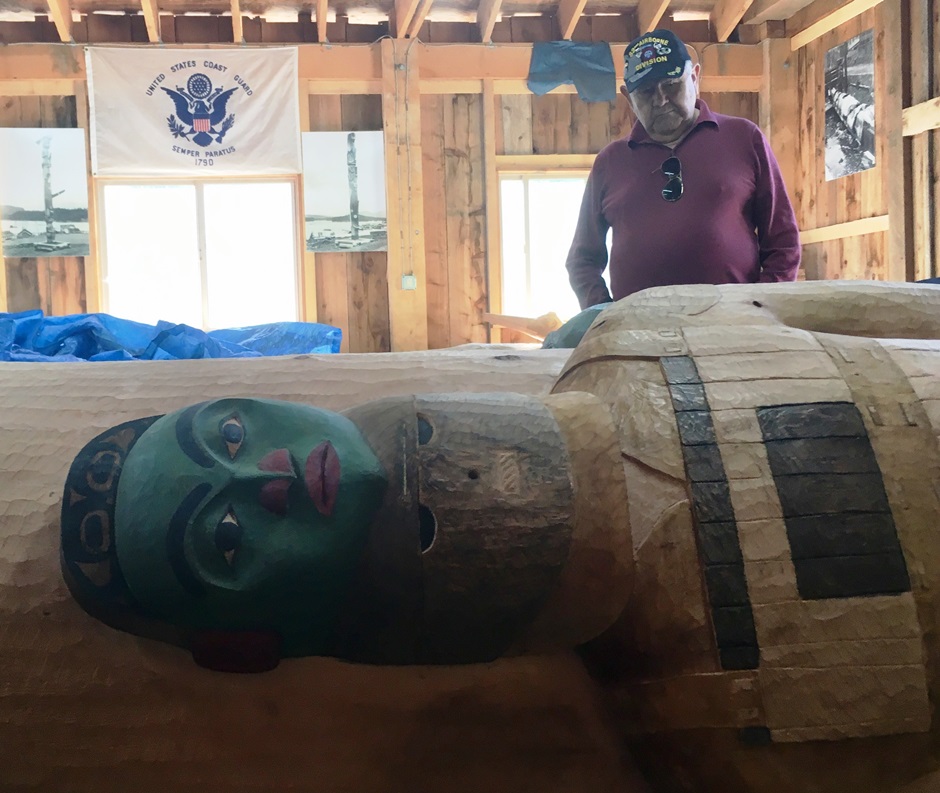 Veteran and Klawock elder Aaron Isaacs looks at the Veterans’ Pole at the Klawock carving shed in early July. The pole will be raised Aug. 18. (KRBD photo by Leila Kheiry)

A new totem pole in Klawock honoring Alaska Native veterans will be raised in mid-August. The pole was carved by Jon Rowan, who worked with veteran and Klawock elder Aaron Isaacs to come up with the design.

“Marine Corps, Navy, Air Force, Coast Guard and the MIA. Down here he has two soldiers, back to back. A modern soldier and an ancient soldier,” Klawock elder Aaron Isaacs says, as he pats the totem pole, lying on its side in the Klawock carving shed.

Isaacs has been planning a totem pole to honor veterans for decades.

Isaacs started fundraising for it with pancake breakfasts at local eatery Annie Betty’s. But, he knew he needed more than pancakes to make it happen.

“Then I started sending out letters to anybody and everybody, asking for contributions,” he said.

And those letters got a response. Private businesses, the Department of Defense. “It just exploded. Before I knew it, I ended up raising $60,000 for this pole.” 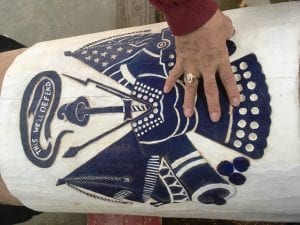 A U.S. Army slogan is “This We’ll Defend.” It’s one of the military insignia’s on the Klawock Veterans’ Pole, to be raised in August. (KRBD photo by Leila Kheiry)

Jon Rowan is the carver, and has been in on the project from the start. After some delays, carving began last September, and Rowan says he’s happy it’s done and ready to raise.

“It was pressing. In my mind,” he said. “I had lots of time, but we have a lot of vets that are leaving us, you know? It was a sigh of relief to finally get it done.”

Rowan says the base of the 37-foot pole will depict a presentation flag, which is a flag the family receives at a veteran’s funeral. The bottom of the pole has two soldiers on either side.

One is a 1960s-era U.S. Army soldier, complete with a pack of Lucky Strike cigarettes tucked in his helmet.

“And then on this side, because all our peoples come from warrior class, or warrior background, or otherwise we wouldn’t be here.  So this here represents them,” he said. “This is the only way that I could do it, is from what I know. So, we put an ancient warrior with helmet, collar, slat armor.”

The warrior holds a double-headed dagger, and will carry a jade pick.

Above the soldiers is the POW-MIA insignia. That stands for Prisoners of War-Missing In Action. Rowan explained that the pole is like a mortuary pole, so he carved a bentwood box on the other side, behind that insignia.

“Because in those old poles, they would have cremated them, the high-ranking, the high-caste people, in that,” he said. “Out of respect for our brothers and sisters that did not come home, that’s why that’s down there.”

Further up are insignias for different branches of the U.S. military. But they’re not all in a line.

“(I) kinda did a swirl, so you have to walk around the whole thing to see it,” Rowan said.

And at the top are an eagle and a raven. But they don’t face each other; they’re back-to-back.

“For the veterans, this is us watching each other’s backs,” Rowan said.

Isaacs says he’s pretty sure this is the first totem pole of its kind. It’s a reminder of all the veterans who have served, and a way to acknowledge Alaska Native veterans, specifically. 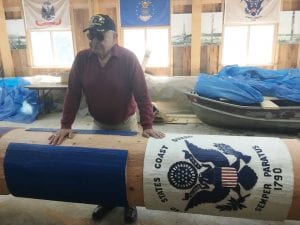 In the Klawock carving shed, elder and veteran Aaron Isaacs describes what it took to get the Veterans’ Pole ready to raise. (KRBD photo by Leila Kheiry)

Isaacs is proud of his service. When asked whether he’s a veteran, he answers with a firm “You bet.”

“I was in Alaska National Guard when I was in high school. Then I got drafted in December of ’61 to ’63. I served with the Army 82nd Airborne Paratroopers. Also, I have a son who is a paratrooper.”

The three-day pole-raising celebration is set for Aug. 16-18. Isaacs says it’s all planned out, from food to housing to speakers. He says he’s hearing interest from people all over the country, as well as the state.

“I contacted my friend, Gen. Jake Lestenkof. He graduated from Mount Edgecombe like I did,” Isaacs said. “And we were in the National Guard at the same time. He went on to become a two-star general. I just contacted him last week. He’ll be here. It’s been exciting.”

Isaacs hopes those breakfasts will include what military members like to call SOS.

“Jon and I told them, ‘Whoever plans these meals better make sure there’s SOS on the menu.’ I don’t think they will, though.”

SOS stands for “ **** on a shingle.” It’s basically some kind of meat in a creamy sauce served over toast.

With or without SOS, after breakfast that final day the pole will be taken to a park in Klawock and raised, surrounded by the veterans it honors.