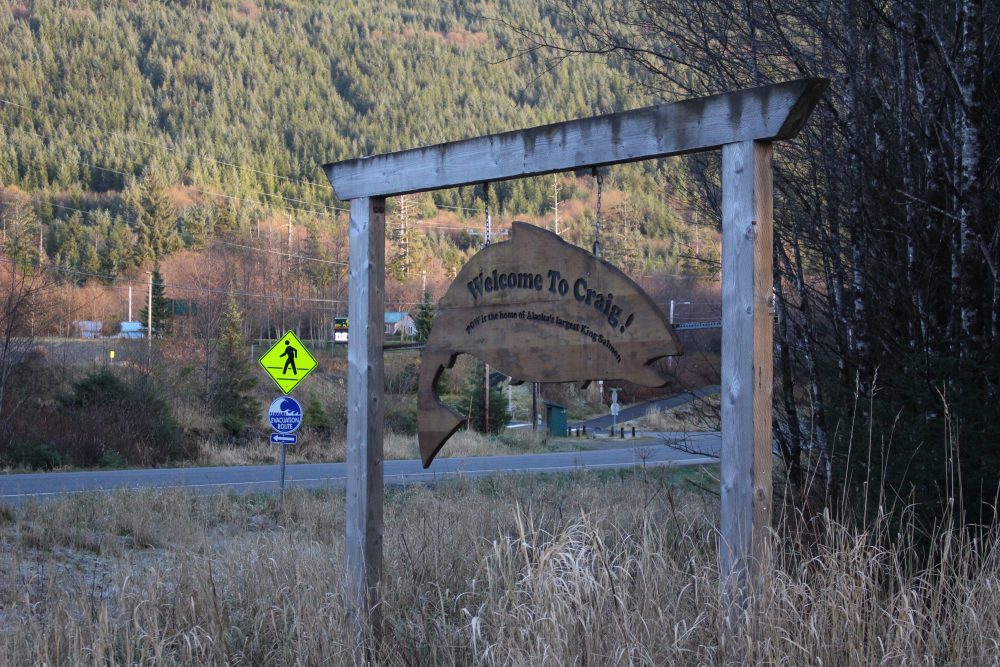 A sign welcomes people to Craig on Prince of Wales Island. (Photo by Elizabeth Jenkins/KTOO)

In early March, people from POW testified in a public conference with the Regulatory Commission of Alaska. Some said they are forced to use cellular boosters in their homes to get any service. Some residents in Coffman Cove even have a designated “cell phone tree” — a spot next to a particular tree that happens to get service.

State Representative Jonathan Kreiss-Tomkins, who helped spur the visit, said the meetings were to begin talks on what services GCI can provide and what business opportunity there is on POW.

“And ultimately after a few conversations with GCI, we came up with the idea of inviting them down to the island and for them to sort of get a sense of what things are like, the cell service and the lack of cell service — profoundly in some communities,” Kreiss-Tomkins said.

Misty Fitzpatrick represents Coffman Cove on the POW Community Advisory Council, an organization that works to solve issues facing all of POW. Fitzpatrick said getting improved cell service is as much of a need for the local tourism industry as it is for residents.

“From the business perspective, I think it’s a big push. I think we’re at a huge disadvantage comparatively to businesses that have reliable communication and data in general,” Fitzpatrick said.

While these talks were about providing better cell service to POW, it was also about how GCI can make money.

GCI is one of many cellular companies in Alaska that can receive federal funding through the Alaska Plan to build cell towers and other equipment in remote parts of the state. But the company can choose to invest that funding elsewhere if it thinks it can not make a profit on POW.

Thorne Bay City Administrator Wayne Benner is cautiously optimistic the visits have shown GCI that not only is there plenty of opportunity, but how badly they need the better wireless service.

“I think they have a better understanding that we’re not just ‘crying wolf’ and want top-notch service. We just want to have service that’s reliable and usable. I think none of them realized the state we were in. So, maybe screaming and hollering will put us on par with some of these other communities,” Benner said.

Company representatives used the visits to gather info on the layout of the island and the status of current equipment, GCI Spokesperson Heather Handyside said. With that info, they’ll try to come up with a business plan that can provide better service to the island while making revenue for them.

They can’t commit to any solid plans yet. But they’re impressed by the communities’ passion on this issue.

“What I can say is that the enthusiasm of people in your communities and the determination of your state representative to keep bringing this up and keeping this visible is a huge asset, and we’re going to see what we can do,” Handyside said.

More talks will continue about how to improve cell service on POW this September when carrier representatives meet in Ketchikan at the Southeast Conference annual fall meeting.