During a brief ceremony in Ketchikan on Friday, the Alaska Forest Association officially endorsed Rep. Don Young in his bid for re-election. Following the ceremony, Young sat down with some local residents and the media to talk about timber and other issues.

“It is with great pleasure that the Alaska Forest Association provides you with our endorsement for the 2018 U.S. House of Representatives election in Alaska,” said Jackie DuRette, director of the AFA, a timber-industry organization. 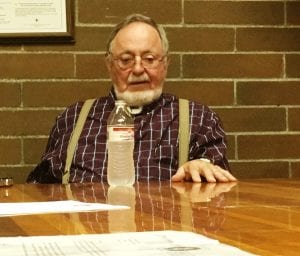 Alaska Rep. Don Young talks to Ketchikan residents and media following a brief endorsement ceremony at the Alaska Forest Association office. Young is up for re-election this year. (KRBD photo by Leila Kheiry)

Reading the endorsement out loud, she went on to detail Young’s support for timber harvest in the state, including his work to exempt Alaska from the federal Roadless Rule.

That rule limits where development and resource extraction can take place on National Forest land. Young was able to get an Alaska exemption included in the U.S. House version of the Farm Bill.

Young talked more about the Roadless Rule following the short ceremony. He said an Alaska exemption needs to be a law, and not a regulation that can be changed as administrations change.

Young said he gets upset when people question the need to manage resources, including timber.

“I get very aggravated about it because it is a fiber we need,” he said. “And not to have it managed is just to me a terrible waste. It’s like managing your fisheries. If you don’t manage, you lose them.”

The Trump administration likely would be supportive of an Alaska exemption, Young said, because timber harvest supports jobs.

In an aside, Young said he’s been through nine presidents and never has seen one so constantly attacked. He blamed political division in part on partisan news channels. He named Fox, MSNBC and CNN, specifically. 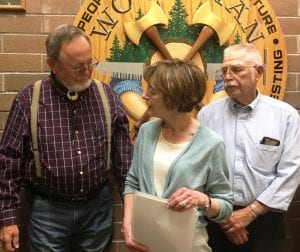 “They make money by dividing,” he said. “There’s no money in what we call togetherness. Most of that is already decided. Even the bobble heads, as I call them. That’s not them thinking and talking. It is done by a computer and they take out what creates hostility on the other side.”

Young also addressed mid-term elections. He predicted that Republicans will hold control of the House by 10 votes. He didn’t make a prediction for the Senate, but said it is where the problems lie.

“They have those archaic rules. We’ve got over 400 bills sitting in the Senate that we, as the House of the people have passed and sent to them and they won’t take them up,” he said. “Because one person can stop them all. It’s just a terrible system.”

For his own re-election campaign, Young said he always runs hard, never takes winning for granted, and will continue to run as long as he enjoys the job.

Young said he’s rated one of the most effective congressional representatives.

“I think it’s all about being effective. The race is going to be, ‘He’s too old, he’s becoming decrepit, he’s mentally unbalanced.’ That’s nothing new,” he said. “But I think the theme of this thing is going to be ‘effective.’”

The state primary election is Aug. 21. On the Republican primary ballot, Young has two challengers, Jed Whittaker of Anchorage and John Nelson of Chugiak.