The candidate filing period for municipal office is open in the Ketchikan area. Seats are available in the City of Ketchikan, Ketchikan Gateway Borough and City of Saxman.

STORY: Kacie Paxton is Ketchikan Borough Clerk.  She says there are five seats open in the borough.

“We have two assembly seats for 3-year terms. Those seats are (held by) Stephen Bradford and Felix Wong.  Both of those assembly members are currently in their first term and they may file again if they choose. Neither is termed out. And then there are three school board seats. Those three seats are held currently by Alma Manabat Parker, Lana Boler and Matt Eisenhower. And the school board does not have term limits, so those three members can file again.”

To qualify for borough assembly, a candidate must be at least 18 years of age, a registered voter, and lived in the Ketchikan Gateway Borough at least one year.  School board candidates must be registered voters, but do not have a one-year residency requirement.

Katy Suiter is clerk for the City of Ketchikan.  She says, on the city side, there are three seats open, two 3-year terms on city council and one 3-year term as mayor. Those currently are held by…

“Janalee Gage and Robert Sivertsen for the council seats and Lew Williams III for the mayoral seat.”

City offices do not have term limits. 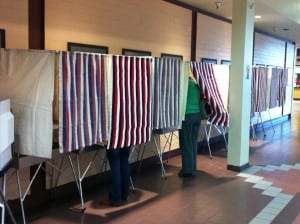 Ketchikan voters cast their ballots at The Plaza mall precinct.

Jackson says there are no term limits.  Candidates must reside in the City of Saxman.

“Anyone who is registered to vote within the City of Saxman can come in and pick up a declaration of candidacy form at the city hall.”

The deadline to file for municipal office in the Ketchikan Gateway Borough, City of Ketchikan and City of Saxman is Monday, August 27th at noon.  Applications are available at the appropriate clerk’s office.

“Boy, just do it. Just get out there and vote, because there are very few people making some very weighty decisions in both the borough and the city. So I just encourage people to vote.”

The deadline to register to vote in the municipal election is September 2nd. Local elections are Tuesday, October 2nd.