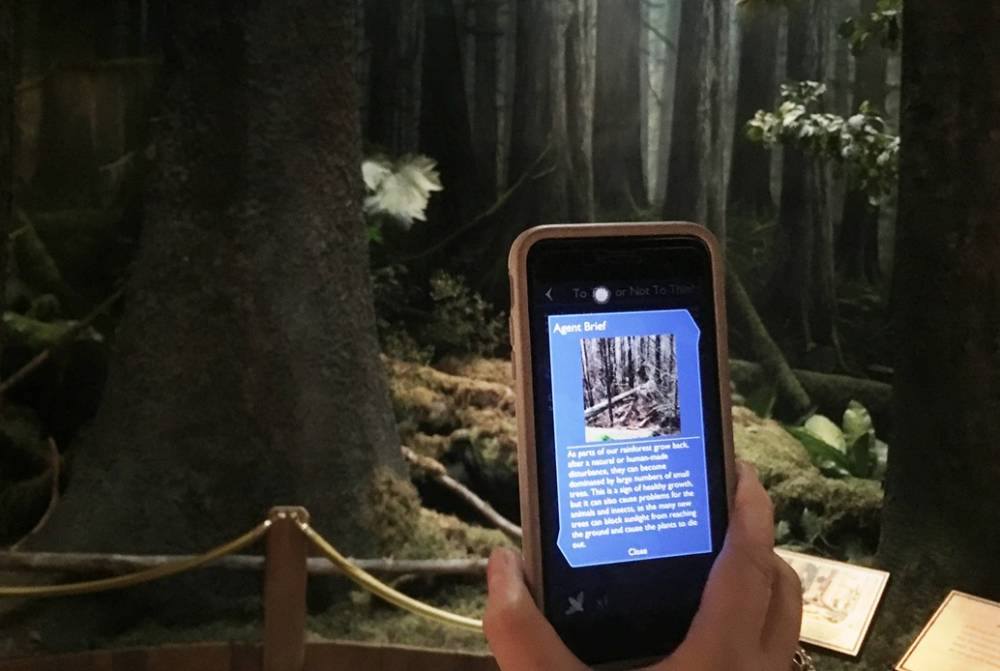 Ketchikan’s Southeast Alaska Discovery Center has a new interactive way for visitors to go through the center’s exhibit and learn about Southeast. The Agents of Discovery game is a free app people can download. (KRBD photo by Leila Kheiry)

Leslie Swada manages the U.S. Forest Service’s Southeast Alaska Discovery Center in Ketchikan. She’s walking me through the process of becoming an Agent of Discovery.

It involves downloading an app. I had a little wifi trouble, though, so we ended up using her phone’s app instead.

But, once you do get the app, there is a range of adventures to choose from. Only one is available in Ketchikan so far – and that’s the one we’re about to take. 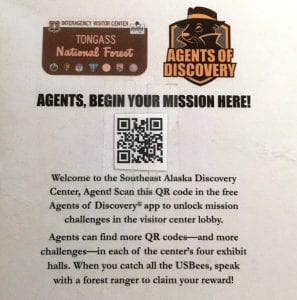 You start by scanning a QR code – one of those square icons that can be used like a bar code.

And a map of the center pops up, with points on the map to touch for individual missions within the building. Swada read the first mission out loud.

“‘Three tribes of Alaska Native peoples call Southeast Alaska home,’” she read. “’Some of whom can trace their heritage in the region back to more than 10,000 years. Each is represented by one of the totem poles you see in the lobby. Which tribes carved these poles?’

“So, we need to go back to the totem poles.”

The poles have short descriptions on their backs, including the tribe associated with each. We have a range of tribes to choose from in the app, including some from Down South.

We tap on the correct answers – Tlingit, Haida and Tsimshian – and then tap on “check answer.”

The next mission is about Alaska’s 1945 anti-discrimination act. The game directs visitors to a display about Elizabeth Peratrovich and the formation of which important Alaska Native rights organization?

“This is the Elizabeth Peratrovich exhibit, and we’re supposed to look under the sashes,” she said. “We have several options here. Which one would you like, Leila?” 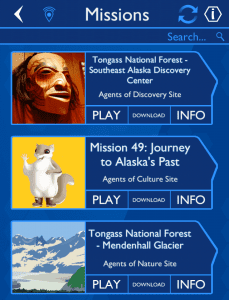 The Agents of Discovery app offers a variety of missions. The only mission available in Ketchikan now is through the Southeast Alaska Discovery Center. (Screen shot image from app)

Then we head into the rainforest exhibit, where we learn about the main types of trees found in Southeast Alaska.

Hemlock, Sitka spruce, and red and yellow cedar were among the choices, so we picked those and submitted another correct answer. We head further into the exhibit and complete a mission about traditional foods, then go into the ecosystems section.

“Which salmon-loving mammals can be found roaming all of Southeast Alaska’s ecosystems from alpine meadows to teeming estuaries?” I read from the challenge. “Hint: Check out the Stream, Alpine and Wildlife displays.”

That would be bears.

“OK. So, the next one it looks like we’re going this way, down the hall,” Swada said, heading toward the resources section. There, we complete missions on mining, logging and fishing.

The game is fun; it encourages players to look more closely at the center’s exhibits than they might otherwise; and if you get something wrong, there aren’t any dire consequences. It just tells you to try again.

Swada said center staff started working on the game last fall, and it’s been in place about a month.

“We’ve always had a scavenger hunt, which has been very successful with all age groups,” she said. “But this draws in more of the middle-school-level, upward, with the tech component, the app component, so it’s really exciting because it’s a new possibility for youth.” 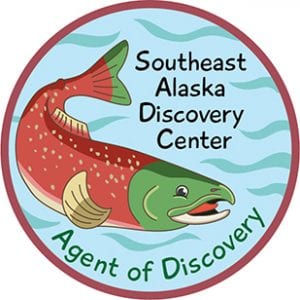 Once a visitor has finished the Southeast Alaska Discovery Center’s Agents of Discovery game, they can be sworn in as a Sockeye Agent and get a patch, although these special patches are still on order. (Image courtesy Leslie Swada)

While new for the Ketchikan center, the Agents of Discovery game has been in place for a while. Swada says it was developed initially for outdoor exploration, and now is available at museums and other locations nationwide.

After successfully playing the game, young Discovery Center visitors can be sworn in as Tongass National Forest Sockeye Agents, and get a special patch to take home.

The patch is still on order, but should be available soon. Until then, visitors get a Junior Ranger patch after taking the oath.

The Discovery Center also is offering free wifi for visitors to use the app. The center charges an admission fee during the summer months, but waives that fee in the off-season.