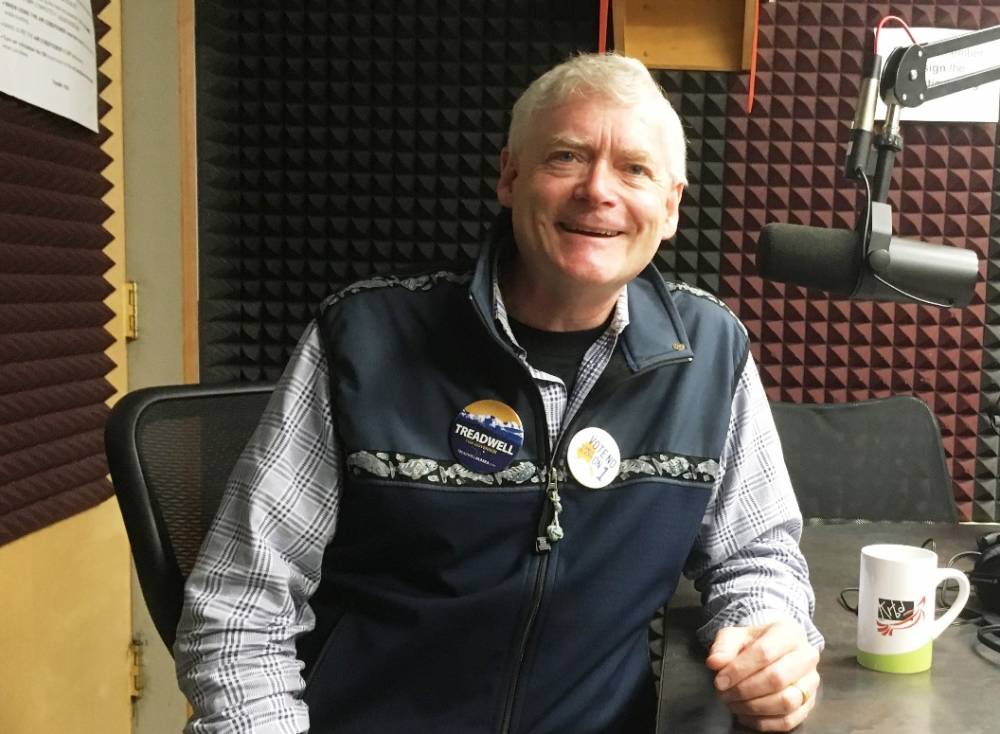 Former Lt. Gov. Mead Treadwell is running for governor in the Republican primary. He arrived in Ketchikan on Friday to campaign, and stopped by KRBD to talk about why he’s running.

Mead Treadwell said he decided to run for governor to restore Alaskans’ trust in government.

He said the state’s move toward using a portion of Permanent Fund earnings for government, putting off credits payments to the oil industry, and relying on potential future income from natural gas are mistakes the current administration has made, and he will try to rectify.

“Let me sound a little bit like Donald Trump, and I’m saying that in a public radio studio, but I’m going to do that,” he said. “We are exporting jobs like crazy from Alaska.”

Treadwell said the state needs to provide incentives to industries so they will build processing and manufacturing facilities in Alaska. Now, he said, raw material, including seafood, is sent out.

“It’s great that you find fresh frozen salmon in a supermarket in the Lower 48. The odds are that fish was headed, gutted and sent to China to have its pin bones taken out and the fillets taken out,” he said. “Processing plants that could be running all year here, instead we’ve exported those jobs to China.”

Incentives to encourage more manufacturing can include reducing power costs, he said, as well as understanding the state’s competitive position. Treadwell said the state is behind the game in Arctic shipping, and needs to be part of that before Russia creates a monopoly.

Treadwell touts his business experience, and said that is the big thing he brings to the table that sets him apart from his primary opponent, Mike Dunleavy.

“I’ve worked in a range of businesses, anything from starting a cell phone company in Alaska or a natural gas pipeline venture in Alaska, to I was chairman of the company that created Street View for Google,” he said.

Treadwell said he would use that business experience in the governor’s office to determine how best to improve Alaska’s economy. He said he also would consider budget decisions from a business standpoint, to some degree.

Treadwell said he believes there is room to cut the state budget. While he didn’t mention any specific cuts, Treadwell said in business, you look at what kind of output you get for your input.

When asked what Southeast concerns he’s familiar with, Treadwell said he has a close connection to Ketchikan and the region.

“Had my grandmother not moved to Ketchikan in the mid-1970s, I don’t think I would be in Alaska,” he said. “She brought me and my youngest brother up, and she ended up being a Vista volunteer and living here about five years.”

Treadwell has lived in Juneau at times, as well, and said he understands the region’s dependence on tourism, fishing, mining and – though becoming less over time – timber.

The ferry system is a key service for the region. Treadwell said the state needs to look into reforming that system to ensure the service continues. He cited Norway’s ferry system as an example.

“One of the things they’ve done is they’ve built up year-round use. It’s basically a private system that has public support for its facilities and so forth. I’m not sure exactly how the funding works,” he said. “The Norwegian coast is as long as the Southeast Alaska coast, probably a little bit longer. And there are roads, and yet the marine highway system works very well. Part of it has been to attract more tourists year round.”

Treadwell adds that he supports continuing to build ferries in the state whenever possible. Ketchikan’s Vigor Alaska shipyard is building two new ferries for the state, and the first is set to be christened in an Aug. 11th ceremony.

Treadwell talked about a few of the decisions in the past few years that he would have done differently.

Treadwell said he also would have worked harder to build a relationship with federal agencies to combat the opioid addiction crisis, which he said is killing people. And, he said, he would have spent less time and money on a natural gas line, and more on Arctic shipping development.

In closing, Treadwell encouraged every eligible Alaskan to vote in the Aug. 21 primary.

Below is a link to the official list of everyone running in the state primary election.