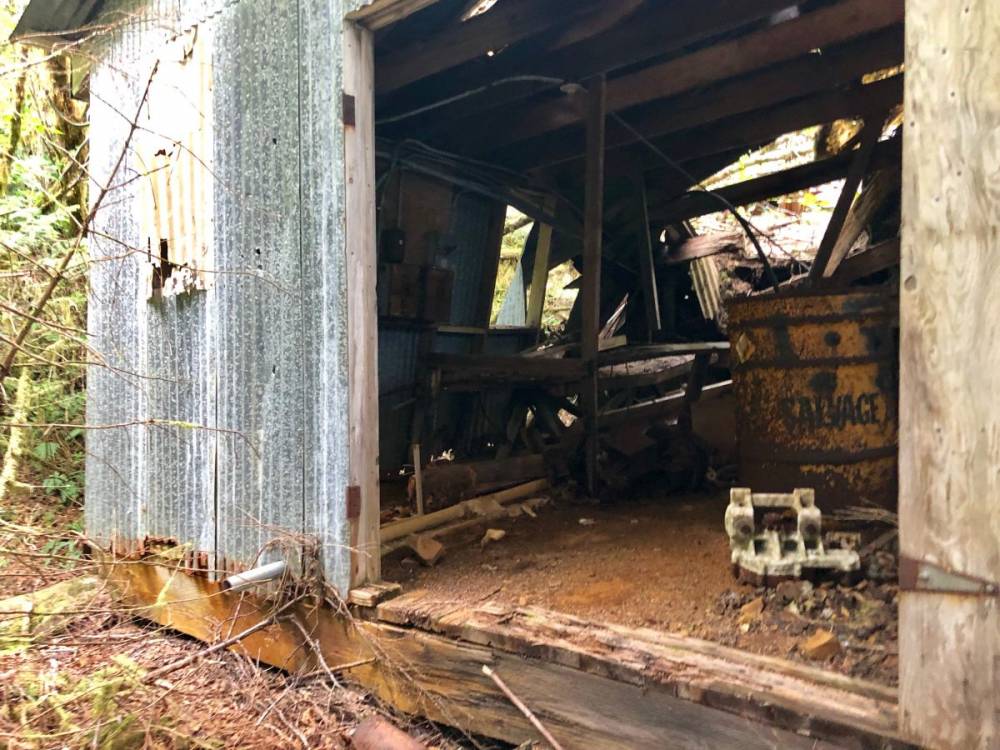 A tin shack standing at the site of the Alaska Lead and Silver Mine near Beaver Falls. (KRBD Photo – Liam Niemeyer).

Ryan Sinkey is the boat captain at George Inlet Lodge, close to where South Tongass Highway ends. We’re in a skiff going up George Inlet near Beaver Falls Cannery.

His job usually means taking out tourists to catch lunch.

But this trip is a bit different. We’re heading to see a former mine site of the Alaska Lead and Silver Mine, associated with the Londevan Prospect, where miners in the early 20th century tried to mine for silver and lead, but didn’t find much.

Once we get on shore, Sinkey and I bushwack through the alders to get to the site. We finally get up to the clearing where there are rusted barrels everywhere, sunken into the ground. Some are even punctured. Old mining equipment is strewn about. A tin shack is still standing in front of us. 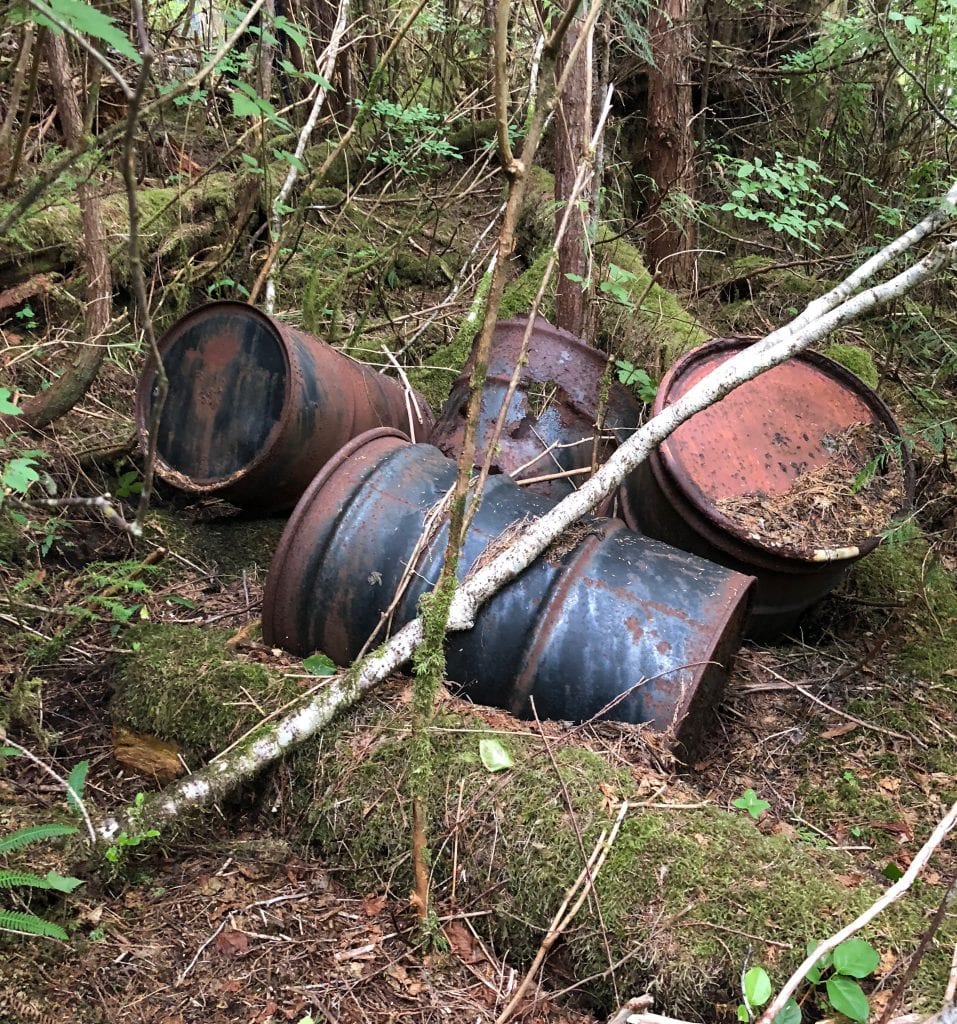 Rusty barrels sink into the ground at the Alaska Lead and Silver Mine, associated with the Londevan Prospect site. (KRBD Photo – Liam Niemeyer)

We have to be careful where we step because this is one of 22 contaminated sites the Alaska Department of Environmental Conservation said still needs to be cleaned up in the Ketchikan-Gateway Borough.

Hazardous chemicals remain in some of those rusted, leaky barrels.

An Alaska Department of Environmental Conservation official said there are about 2,300 contaminated sites in Alaska that still need to be cleaned of petroleum, heavy metals and other contaminants.

Ann Marie Palmieri is with the Alaska Department of Environmental Conservation and specializes in contaminated mine sites. Palmieri said mines in Alaska can be difficult to clean up for many reasons.

“These [mines] are typically in remote areas. And another issue is that there are high levels of naturally occurring metals in these areas, so differentiating between these metals and contamination can be challenging,” Palmieri said.

This site was discovered in 1980 by the DEC and was last visited by Bureau of Land Management officials in 1998. It was determined then that some cleanup needed to happen. But since then, the site has been sitting untouched. 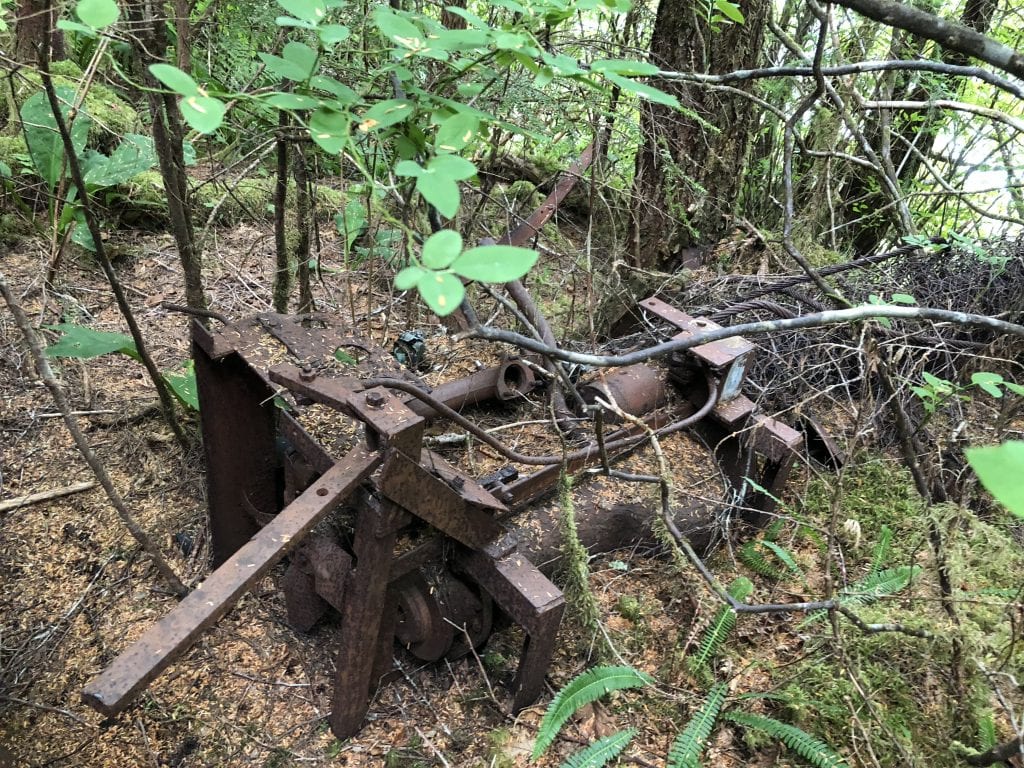 An old piece of mining equipment at the Alaska Lead and Silver Mine, associated with the Londevan Prospect site. (KRBD Photo – Liam Niemeyer)

One of the reasons cleanup can take so long is that some contaminated sites in the borough are determined to have less risk of spreading contamination and hurting people or wildlife.

John Halverson is the Contaminated Sites Program Director at DEC. He said sites like these have lower priority compared to more dangerous sites.

“Those do tend to end up sitting unfortunately for an extended period of time and not being addressed because the state doesn’t have resources to do cleanup on those if there are higher priority projects that we’re trying to deal with,” Halverson said.

U.S. Forest Service Spokesman Paul Robbins does point to the success of cleanup at the former Mahoney Mine site just north of the Londevan Prospect.

The mine is on Forest Service land, and lead-contaminated soil was last removed in 2008. And while testing shows there are still elevated levels of lead at the Mahoney Mine, wildlife is recovering.

“What we saw was a variety of plants, spruces, alders and blueberries have taken root and are proliferating. So that’s an example of closures, actions being effective,” Robbins said.

Robbins said just like any agency, there’s only so much manpower and funding at the forest service to deal with lower-priority contaminated sites. 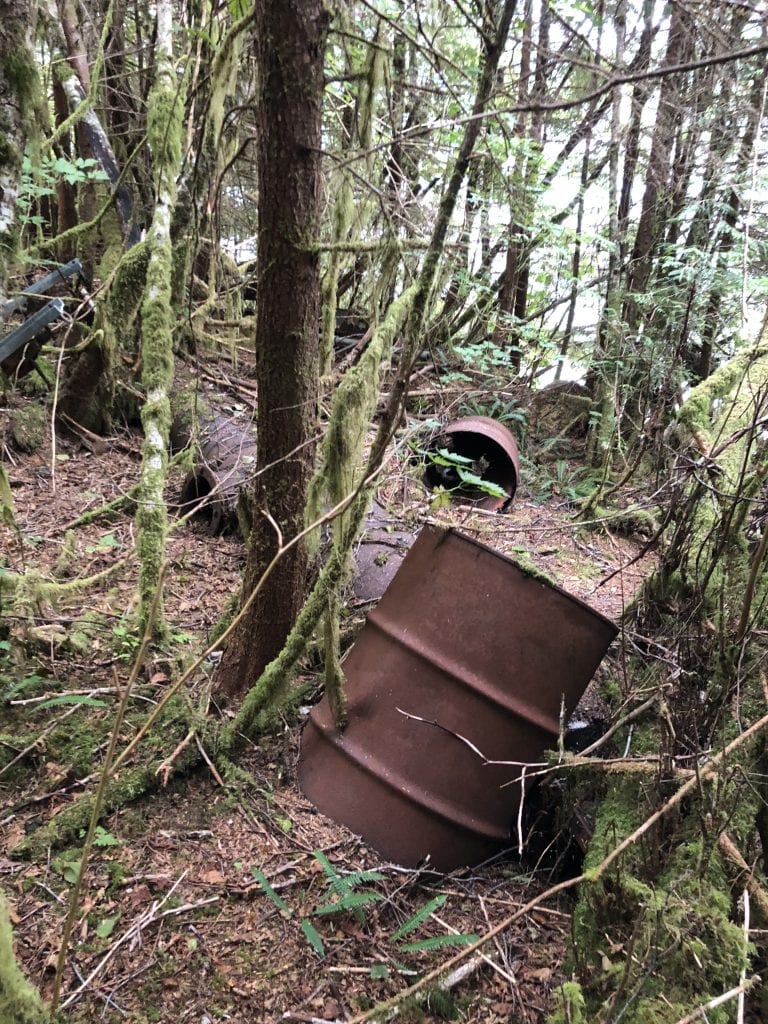 Rusted barrels at the Alaska Lead and Silver Mine, associated with the Londevan Prospect site. (KRBD Photo – Liam Niemeyer)