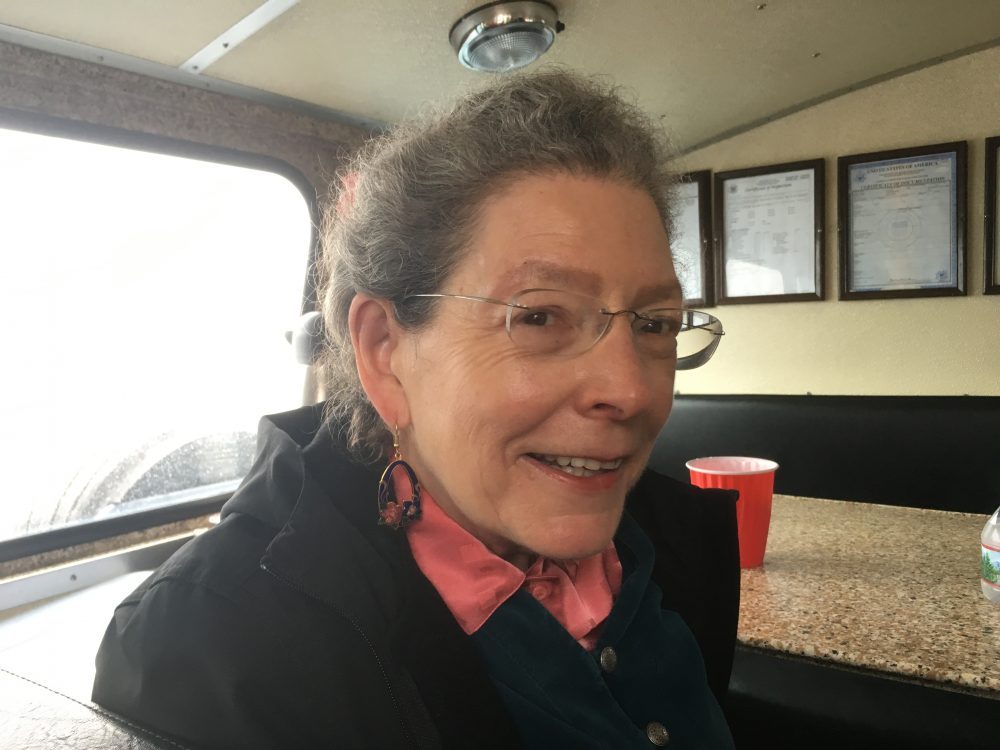 Deborah Hayden three days after her bear encounter. Scratches and a wound are slightly visible on the right side of her face (KRBD staff photo by Leila Kheiry).

A Ketchikan woman received minor scratches after an encounter with a family of black bears on Married Man’s Trail Friday night.

Deborah Hayden says she was heading to Cape Fox Lodge and, because the funicular was not operating, took the trail. As she reached the gravel section toward the top, she saw a sow with two cubs off to her left.

“She looked at me, and I looked at her, and then I looked back down the walkway and I realized that was not a good escape route because if I turned and ran down there, I knew she could run faster than I could, and I didn’t care to be attacked from behind.”

Hayden says the hill on the other side of the trail was steep and did not offer an escape route. She says she couldn’t continue forward on the trail because of the bears’ location.  Hayden says then the sow began walking toward her.

“I went and stood behind the rail off the walkway, there’s a wooden rail on either side of the walkway, thinking that would hide most of my body and I wouldn’t look like a threat to her.”

She says the bear continued coming toward her. 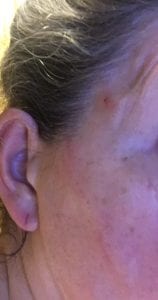 “And she got very, very close to me. And I tried to stay quiet, thinking again that I didn’t want to appear to be a threat to her. She wasn’t particularly surprised or enraged, so I took that to be a good sign. She got her nose right up in my face, almost touching my cheek. And then she climbed up on my shoulder and then wacked me with her claws.”

Hayden says she started yelling for help. She says the sow backed off somewhat, but then came back toward her, climbed up on Hayden’s shoulders again, and swiped her with her claws.  Hayden says she continued to make noise and pushed the bear off her.

“I was still making so much noise and I think it really hurt her ears so she backed off a bit. And then I started waving my arms and lunged toward her. She backed off some more, so I started yelling “Shoo, Shoo” at her. She just walked away, and went and got her cubs and then walked off.”

Hayden says she continued to yell, but no one responded. The bear had knocked off her glasses, so she was unable to see well. Hayden says she had her cell phone with her and called the police for help.

“So they found my glasses for me. They were very good about that. And they escorted me back up the trail. They said that when they came up the hill at Venetia Way, they saw the bear and cubs at the bottom of the hill. So that was reassuring – that they were that far way.”

Hayden says her jacket was torn and she ended up with a few scratches on her face, chest and arm, and a small puncture wound above her eye, but otherwise was not hurt. Hayden says she wasn’t fearful, she just wasn’t sure what to do. She says she realizes she was lucky and does not plan to take the trail again until bears have gone back to their dens.

Ross Dorendorf is a wildlife biologist with the Alaska Department of Fish and Game.  He did not know all of the details of Hayden’s encounter, so said he couldn’t say whether she should have done things differently. He offered this advice to anyone encountering a black bear.

“You want to stop and first identify if that bear knows you’re there or not. If the bear doesn’t know that you’re there, quietly back away and make your way away quietly, watching the bear as you exit the area.”

If the bear does see you, he says you should stop, stand your ground, and assess the situation.

“A sow with cubs. She notices you. Her initial reaction might be to stop and see what you’re going to do as well. See if she’ll move off by herself.  If she stops and then starts potentially coming toward you huffing and popping her jaws, that’s when you want to, again, stand your ground. Talk quietly to her, wait for her to stop doing that, and then slowly back away.”

Dorendorf says a sow wants space between you and her cubs and is not likely to attack.

“If she comes at you, it’s more than likely a bluff charge. She’ll run at you, stop and then run back to her cubs. You’ll want to stop and wait until that action ceases and then you’ll want to back away as slowly as you can.”

He says you should never run.  If a bear continues to charge you and knocks you down, you should lie down flat on your stomach, and cover your neck by interlacing your hands, remaining quiet and still.

Dorendorf says to stay in that position until you hear the bear leave. He says the bear will leave when it no longer sees you as a threat.  Dorendorf says the only time a person should get aggressive is if the bear is predatory.

“…and continues biting you. That’s when we want to get out of that position that I just described and basically fight it as hard as you can with anything you can to get it to stop.”

Dorendorf says that is an extreme situation that is not likely to happen.  He says in most cases the bear will false charge and eventually leave.

Dorendorf says in an emergency situation police or troopers should be contacted.  If bears are getting into garbage or destroying property, contact Fish and Game so they can assess the situation and see if there is something they can do to help. Dorendorf encourages everyone to secure their garbage.  He says free ratchet straps for that purpose are available from the ADF&G office in Ketchikan and the Ketchikan Police Department.